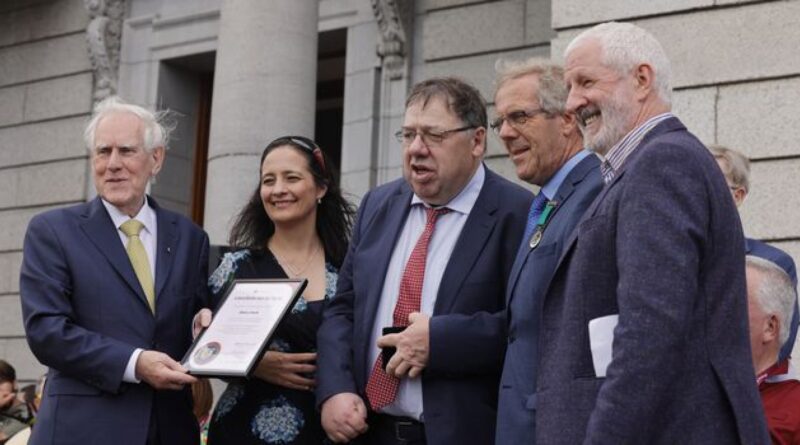 Former taoiseach Brian Cowen was honoured at Fleadh Cheoil na hÉireann in Mullingar on Thursday for his long-standing support of Comhaltas Ceoltóirí Éireann.

The former Fianna Fáil leader (62), who suffered a stroke in July 2019, made a rare public appearance at the presentation on the steps of the Cathedral of Christ the King in the Co Westmeath town, where the fleadh runs until Sunday.

“I’d like to thank everyone involved in giving me this award, whether it was deserved or not that remains to be seen, but it’s done now and I’m not giving it back,” he said, adding that he was only joking. “I’m delighted to be a near neighbour of ye here in Offaly, as we look enviously at the great craic you’re going to have in Mullingar over the next few days.”

Mr Cowen congratulated the Westmeath footballers on winning the inaugural Tailteann Cup in June, noting that they had given Offaly “an awful hiding” during the campaign. He thanked the 100 or so young musicians from Seisiún Mór na hÉigse, who entertained the crowd in between speeches. “Thank you so much for inviting me here on such a wonderful occasion and it’s a great pleasure to be here alongside so many friends.”

Mr Ó hArgáin said he was delighted to present the award to Mr Cowen.

“Those of us who have been working in Comhaltas know that he was always an anchor person for us over the years,” he said. “Having Brian back with us, and we know the challenges he has had, is just wonderful.”

During his tenure as taoiseach, Mr Cowen was credited in relation to the launch of the Comhaltas Digital Archive.

Minister for Culture Catherine Martin was presented with a plaque by Mr Ó hArgáin for her service to Comhaltas. He described Ms Martin as “a stalwart when it comes to Comhaltas, always accessible and always there to help”.