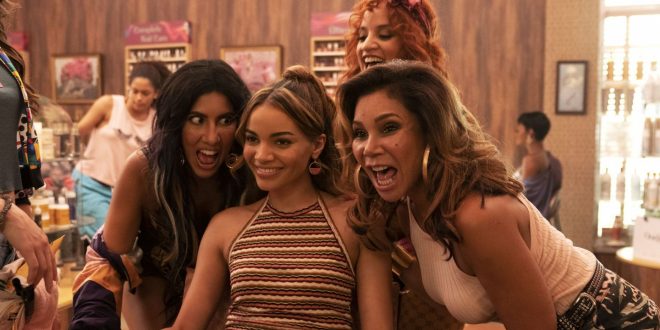 In The Heights Is A Sueñito Come True For Leslie Grace

The film adaptation of the hit Broadway musical In the Heights focuses on the sueñitos, or little dreams, of a Latinx-Caribbean community in New York City’s Washington Heights neighborhood. After making it out of the Heights to attend Stanford University, Nina Rosario feels out of place in her new environment, so she returns home to reconnect with the community that raised her. As a Dominican-American singer that was born in the Bronx, Leslie Grace is living out her own sueñito by portraying Nina — and making her big-screen debut in the process.

“I feel so blessed to be part of this movie,” Grace tells MTV News. “I feel the way that these characters do — that [they] have dreams, that [they] have aspirations, and that [they] are waiting for that moment to reach those things they’ve been working so hard to accomplish all of their life: to be seen.”

Grace’s dream is nearly a decade in the making since breaking out with her bachata cover of The Shirelles’s “Will You Still Love Me Tomorrow” in 2012. She was discovered by salsa music giant Sergio George, who also put another singer of Dominican descent, Prince Royce, on the map. Grace earned the record for the youngest female artist to top Billboard‘s Latin Airplay chart, which she still holds today. In the years that followed, the 26-year-old has evolved from tropical artist to Latina pop star with recent forays into reggaeton sounds and K-pop with Super Junior. She’s auditioned for a few years in pursuit of a film career, but In the Heights marks her first opportunity to make a statement.

The film was produced by Lin-Manuel Miranda, who also wrote the musical along with Quiara Alegría Hudes; Hudes adapted it for the big screen. As such, In the Heights is not only a big moment of Latinx visibility, but it also uplifts Latinx people of Caribbean descent from countries like the Dominican Republic, Puerto Rico, and Cuba. As an Afro-Latina, Grace is also breaking down barriers for Black Latinx representation in film in the lead role of Nina.

“To know that Nina is Afro-Latina, and the way we get to see that storyline and feel that otherness that she feels, those hints of microaggressions, and see that in the scope of Latinidad, which we rarely get to see, it brings me so much pride and joy that I get to be part of telling that story,” Grace says. “I feel empowered by her story, too. I can’t wait for little girls that look like me to be able to see this.”

After scoring a hit with her reggaeton cover of Tejana music legend Selena’s “Si Una Vez,” Grace was picked by Cuban-American icon Gloria Estefan to remake her ’80s smash “Conga” alongside Meek Mill earlier this year. “Selena and Gloria for me were two people that really exemplified that you don’t have to choose. You can sing in English. You can sing in Spanish,” she says. “They paved the way for the international Latina superstar.”

With In the Heights, Grace is living her superstar dream in the music industry and now also in Hollywood. In an interview with MTV News, Grace talked about making her film debut and what’s next.

MTV News: Would you say that this starring role in In the Heights is your sueñito?

Leslie Grace: It is my sueñito! It’s all of our sueñitos. If you talk to anybody in the cast, everyone has a really special story with this musical because, in a lot of ways, it’s the only open door that we saw for ourselves. For me, it was in film. I had been auditioning for a good couple of years still feeling like I’m just a musician that people don’t see as an actress. In the Heights was the first musical that I read that I felt like, oh my god! I know her. I am her! I can feel my story in this. I can see my abuela in this. I can see my mom in this. It’s like a sueñito for us to be a part of this.

MTV News: Did your experience as a singer help you prepare for this role?

Grace: Yes! I’m very grateful for my experience in music that informed a little bit of my confidence that I could go into this whole new world of huge movie magic. I will say that there was nothing like this that I had done in the past. I’m glad that I was familiar with rehearsal and choreography, but when it gets down to it, the level of preparation that it takes to create the musical world that we live in in this movie, it takes your whole heart and soul in a way that all of us were challenged. All of us were in a new element and that’s what made it so fun. We felt like we were being challenged every day and wanted to give our best.

MTV News: Which song from In the Heights was your favorite to perform?

Grace: The most fun ones to be a part of were the ensemble ones like “Carnaval del Barrio” because there were moments on set that you could feel were bigger than you, that you could feel were historic. It was beyond acting. It was like, I know that this moment that we’re creating right now, where we’re waving all our flags in the air and Lin is on the fire escape watching down on us, we’re dancing and we’re singing the song and we’re filled with so much pride.

The world will one day see this moment and they will see the celebration of what it is to be where you’re from in a huge way on the big screen. And the moments that we got to lean on each other. There were a lot of hard ones, like dancing on the side of the building for “When the Sun Goes Down.” Corey [Hawkins] leaned on me and I leaned on him, figuratively and literally, so we didn’t fall off that wall.

MTV: What do you hope the audience gets out of this movie?

Grace: I hope that they feel seen. Not only seen, but celebrated, because sometimes we may see ourselves on screen, especially the Latinx community and communities of color, and we see ourselves in this light that’s so troubled or so traumatic, and we never get to the celebration. We never get to where the struggle is a bigger excuse to celebrate life. I love that our movie does that. I’m happy that we get to do that through the scope of this beautiful, cultural movie and community that’s such a melting pot. I can’t wait for people to see themselves.

MTV News: What does the future hold for you in terms of acting?

Grace: I hope a lot. I’ve definitely continued to read for other projects and really find things I feel connected to. I’m continuing to learn. This movie was like the greatest school for me. In so many ways, as an actress but also in general as a creative, it informed so much about how I want to go back to music, how I want to go back into any project that I do. I really want to be personally invested in everything I attach my name to because now I’ve seen the quality of work that happens when there’s something at stake for all the people involved. Heights has set the bar real high for a lot of the projects that I’m reading for. But in general, I just want to continue to do projects that feel personal to me and that I feel like there’s something to be learned from them. Heights really taught me that I can seek those projects out and really look forward to them.