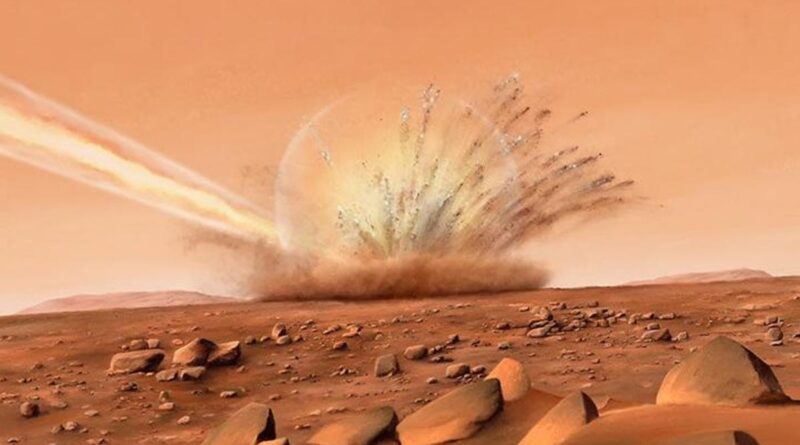 NASA’s InSight lander, a mission devoted to unlocking the secrets of the Martian interior, likely has just a few months left before its dust-covered solar panels stop being able to provide sufficient power. But the faltering lander’s instruments continue their work advancing our understanding of volcanology and seismology on the Red Planet.

Three papers published today—two in Science and one in Nature Astronomy—reveal details of Mars’ interior, its seismic waves, and even two major meteorite impacts on the planet last year.

One of the new papers describes a new type of seismic wave, induced by a meteorite that struck Mars in December 2021. That impact yielded seismic waves that traveled across the planet’s surface and were detected by InSight. It’s the first time that type of seismic wave has been observed off-Earth.

It was also the first time InSight has been able to look across Mars, rather than within it. “​​Previous to the detection of surface waves on Mars, our understanding of the Martian crust has been limited to what’s underneath the InSight landing site, because we were only using body waves that dive deep into the mantle,” said Doyeon Kim, a geophysicist at ETH Zurich and the paper’s lead author, in an email to Gizmodo.

The waves revealed new information about Mars’ crust: In the planet’s north, the crust is denser than it is directly below InSight. However, surface waves travel at similar speeds in the planet’s southern highlands and northern lowlands, indicating that the crust (at least up to 18.64 miles beneath the surface) is probably similar in composition throughout.

The other paper about the Martian meteorites noted two impact events—the December 24 impact and one on September 18, which formed a cluster of craters. The largest of the September impact craters was about 427 feet wide, while the December crater was about 492 feet wide.

The December impact site was seen by the Mars Reconnaissance Orbiter, which has been observing and imaging the Martian surface since 2006. The crater was were much larger than the impact craters the spacecraft normally sees.

The asteroid that caused the crater was probably between 17 and 33 feet (5-10 meters) across, according to Lori Glaze, director of NASA’s Planetary Science Division, in a press conference held today.

“We’ve learned so much about Mars’ crust, interior, and more,” Glaze said. “What an awesome capstone science result to end on. Literally going out with a bang.”

Mars is rumbling with quakes—and magma?

To date, InSight has detected over 1,300 marsquakes—tremors that send seismic waves throughout the planet that the lander’s seismometer can detect. These marsquakes are vital for planetary scientists seeking to understand the Martian interior, from its crust to its core. In turn, those findings can reveal how Mars formed as well as how geophysically active the planet is today.

In April and May, InSight detected its largest marsquakes yet in a span of just two weeks. The largest was magnitude 5, the kind that on Earth would be strongly felt but only cause minor damage.

But researchers weren’t sure where the quake began, because Martian tremors send seismic waves bouncing around the planet’s interior. By the time the waves are detected by InSight, their origins can be unclear.

A new analysis of the 1,300-odd quakes found that about 20 recent tremors’ epicenters were in the central region of Cerberus Fossae, a swath of Elysium Planitia characterized by craggy rifts. Comparing the low-frequency marsquakes in the area with images of Cerberus Fossae, the team found dark dust in the area, which suggested that volcanic activity may have occurred in the last 50,000 years. Scientists have debated whether there are still active volcanoes on Mars.

“The quakes have a spectral signature that suggests a weak, relatively soft crust,” Simon Stähler, a geophysicist at ETH Zurich and the paper’s lead author, wrote in an email to Gizmodo. “Basically, they sound low-pitched. More like when you break a soft wax candle instead of hard glass.”

The softness of the signature suggested to Stähler’s team that magma (molten lava) could still be present within Mars.

Billions of years ago, Mars was very volcanically active. Even the Perseverance rover—about 2,000 miles from InSight—is finding more volcanic rock than scientists expected, in lieu of the sedimentary layers the rover is hoping to probe. But the fact that Cerberus Fossae is still grumbling indicates that volcanism could still be relevant in shaping the Martian surface.

NASA announced that the InSight mission would likely end by December 2022 back in May, but in June, the agency stated the mission could end sooner, because the team wanted to prioritize collecting more scientific data over the lander’s longevity. After all, what’s the point of having an active science mission if it’s not doing any science?

In September, a NASA spokesperson told Gizmodo in an email that the lander could die anywhere between late October and January. Its true expiration date comes down to the amount of dust that adheres to the solar panels. The dust on Mars is very fine and sticks to robots on the planet due to electrostatic forces. (Scientists have been working on a solution to this problem, but it did not come in time for InSight.)

The recent teams hold out hope that InSight will transmit some more useful data before it shuts down. Stähler said his team is expecting the lander will persist for about four to eight more weeks, but they’ve been expecting that for a year now. Bruce Banerdt, InSight’s principal investigator, stated the same timeline during a NASA press conference today.

To their credit, InSight’s team has fought the intractable dust, even dumping dirt on the panels in an effort to knock off some of the dust. That merely delayed the inevitable, but InSight has already survived beyond expectations.

When InSight finally powers down, there will be no other seismic station on Mars. The lander’s end is, erm, in sight, but its industrious work on the planet has exceeded expectations.