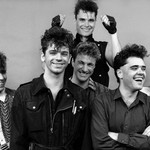 Inducted into the ARIA Hall of Fame in 2001, INXS remain one of the country’s “most adored and iconic acts,” Herd notes.

The hits collection was released in 2011 and features such classics as “Never Tear Us Apart,” “Original Sin” and Billboard Hot 100 leader “Need You Tonight.”

Last November, The Very Best was awarded “Diamond” status, for combined sales in-excess of 500,000 in Australia.

During its journey, The Very Best ruled the national tally for seven weeks and came in at No. 1 on ARIA’s End Of Decade Australian Albums Chart.

“It is truly amazing news, to hear INXS’s The Very Best has been in the Top 100 album charts for nine years,” comments founding band member Andrew Farriss.

INXS formed 44 years ago in Perth, Western Australia, and would go on to sell more than 50 million albums worldwide.

Led by the charismatic Hutchence, the new wave outfit scored six U.K. top 10 albums (including a No. 1 with Welcome To Wherever You Are from 1992) and five U.S. top 20 albums. At the peak of their powers in the late 1980s and early-to-mid 1990s, INXS was one of the biggest stadium acts on the planet.

Tragedy struck in 1997 when Hutchence died, aged 37. The band continued performing with guest singers, before splitting in November 2012.  All told, the group’s recording career spanned 35 years, more than 200 songs and 11 studio albums, including six that sold platinum or better in the U.S.

The group enjoyed a comeback of sorts following the controversial 2014 mini-series Never Tear Us Apart and Richard Lowenstein’s 2019 documentary film Mystify, which launched INXS back into the charts.

In 2017, INXS late mentor Chris Murphy signed the group’s classic catalogue to his label Petrol Records, and engineered a string of projects to introduce INXS and their music to new generations.