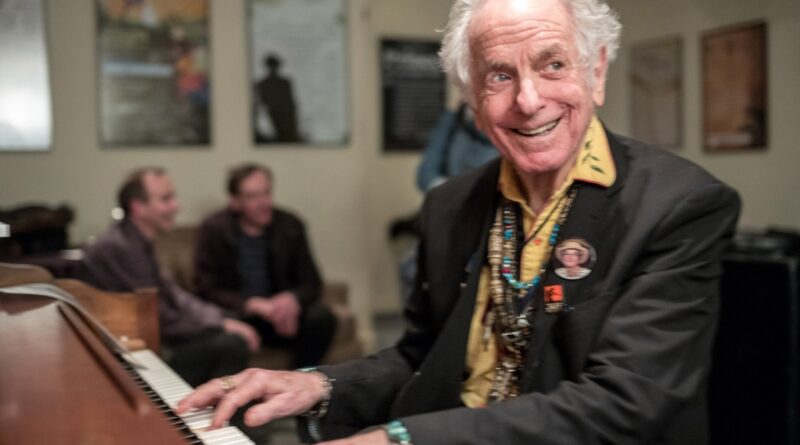 Latin jazz pro Bobby Sanabria led an eclectic band through an evening of mambo and bop as part of The Village Trip festival.

A Friday (Sept. 16) concert at Joe’s Pub in Manhattan was centered around 100 years of Beat Generation writer/poet Jack Kerouac, but the more mind-boggling number at hand that night was 65; it had been that many years since one of the night’s performers, David Amram, pioneered improvisational jazz poetry at an art gallery just blocks away back in 1957 alongside the On the Road author. And even though more years have passed in the interim than Kerouac spent on earth, the 91-year-old Amram remains agile on everything from the piano to the pan flute while effortlessly scatting out witty bon mots at the drop of a hat.

Alongside Latin jazz maestro Bobby Sanabria, Amram was toasting the legacy of his late friend and collaborator as part of The Village Trip, an annual festival celebrating the rich cultural and musical legacy of NYC’s Greenwich Village. (In its fourth iteration, the festival has expanded to a two-week affair, running Sept. 10-25.) But the atmosphere at Joe’s Pub on Friday night felt less legacy and more living. The concert, titled Children of the American Bop (And Mambo!) Night, was a vibrant, fluid and breathing dose of the Charlie Parker-style bebop and mambo music (think the Titos, Puente and Rodríguez) which fueled the pounding rhythms of the Beat Generation and its scribes, from Kerouac to Allen Ginsberg.

With band leader Sanabria on drums and Amram switching between piano, bongos and the pennywhistle, the main band (which included Amram’s son Adam on percussion) was joined by Bronx native Jennifer Jade Ledesna, whose exhilarating vocals and lithe dancing commanded the stage during the mambo numbers; Newark, N.J.-raised Antoinette Montague, an astonishingly powerful jazz and blues singer whose pipes and presence elevated the evening; plus, actress Adira Amram (David’s daughter) and the irrepressible Marcos de la Fuente, who performed Kerouac’s words in English and Spanish, respectively, while the band played the music that Kerouac adored.

“Shakespeare said ‘brevity is the soul of wit’ / As for this evening, I guess that’s it,” Amram quipped to a groove at the close of the show. (In a strange coincidence, Turner Classic Movies began airing 1961’s Splendor in the Grass soon after the performance wrapped, which features a score from Amram – so in a sense, his music played on into the evening long after he left the stage.)

It’s far from over for The Village Trip, which extends another week and includes numerous musical happenings. There are two concert salutes to Phil Ochs (Sept. 18 & 21), an evening of music from Charlie Parker and Stefan Wolpe (Sept. 22), a celebration of Philip Glass at 85 (Sept. 23) and plenty more.