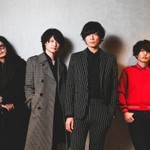 You all strike me as guys who don’t dwell on the past as a matter of principle, so your greatest hits album came as a surprise. Why did you decided to release it?

Kawakami: Since we’ve released seven albums over the course of ten years, we thought that perhaps new fans would find themselves at a loss as to which one they should listen to first when they feel like checking out our catalog before coming to a show. We’ve selected some good gateway songs, so it’d be great if people like them and then decide to delve further into our other works from there.

What did you feel while you were producing the album, or when you actually listened to its lineup?

Shomura: Each track reminded me that I enjoyed life so much back then and that I lived so earnestly. And that was what led to today. Though I’ll continue on outside the band in the future, when I listen to this album, I get excited thinking about what the band will do next. I’m really proud of all the songs.

Shirai: We mixed some of the tracks over again. On one of them, “For Freedom,” our previous drummer Hiroki Ishikawa is playing on the recording, so it was fun looking back, like, “Oh yeah, Isshi used to sound like this, remember?”

Isobe: I felt that a lot of these songs now thrive as live renditions. “Kill Me If You Can” has that little twang in the end, which I’d forgotten all about because I’ve played it so many times in concert. [Laughs] I was able to enjoy it from a listener’s point of view.

Kawakami: Regarding the lyrics, I felt that what I say basically hasn’t changed. [Kawakami is the band’s principal songwriter.] The first song we included in the set, “Ondosa,” is one we had since before our debut, but the way I feel and think really hasn’t changed. I think that’s a good thing. It was an opportunity to acknowledge that I probably won’t change from now on, either, and that the essence of what I want to say exist in these songs.

If there was a turning point for the band, which song captures that moment best?

Isobe: My choice would be “For Freedom,” because it kicked off our debut. There were multiple turning points during these past ten years, but “For Freedom” is the song that I really feel like, “If we hadn’t had that one, what would have happened?”

Shirai: “For Freedom” was the moment our direction was set, and it felt like a breath of fresh air. I’d just joined the band, and switched from bass to guitar at that timing, so I was still trying to find my style as a guitarist. I think that the reason why my style gradually became so rock-tinged is because the riff in “For Freedom” leaves such a strong impression.

Kawakami: Before we made our debut, we used to busk in Yoyogi Park [in Shibuya, Tokyo] every week. There were some good songs among the ones we used to perform on the street, but none of them felt most essential for the band. One day, I was playing the guitar cooped up in my room after coming home from work, and wrote a chorus for “For Freedom” fairly quickly. It felt like I’d aired out something from inside of me and thought, “I feel much better now.”

Isobe: All four of us were living together at the time, and we each had jobs so that we could keep performing. We were in the band because we had confidence, but couldn’t debut for a long time and were at the end of our ropes. So it was like that disappointment of, “Why won’t anybody acknowledge us?” and all the pent-up frustration were loaded on top of “For Freedom.”

Shomura: When we wrote “Starrrrrrr,” we were trying to figure out how to play a song that has a kind of unifying force. That track was born by blending the things we’d cultivated until that point, and also adding what was lacking by squeezing it out through our sessions in the studio. It was tough while we were producing it, but I have a special place in my heart for that one because so much love went into it.

Kawakami: If I were to choose another one, it’d be “Mosquito Bite.” We spent some time outside of Japan [in New York to record Sleepless in Brooklyn] because we needed some time to become nobodies. For the first time in a while, it felt like something significant had popped out when this song was born. We don’t have a producer, and write songs that we want to perform at that point in time, and even choose our own outfits. Still, we have our moments when we become lost, like, “What is it we want to do right now?” At the time, our way of finding the answer to that was to write songs in New York. “Mosquito Bite” might have been my biggest turning point in a personal sense, in that it taught me the importance not being caught up in anything and sort of popping songs out like that.

How are you feeling now as you kick off the next ten years of your career?

Kawakami: We want to destroy all the common sense that we’ve built up over the years. We have to use the past ten years as a springboard for the future or we won’t be able to grow. We still haven’t reached the place we dreamed about ten years ago. Right now, we’re taking a good hard look at ourselves once again in order to continue pursuing what we want to do, and we’re exploring what needs to be done for us to do so.

Your last show as a member of [Alexandros] is coming up soon, Mr. Shomura. How do you feel? [The Interview took place in mid-December.]

Shomura: It’s really hard to describe, but… One thing I can say with certainty is that I’ll get on that stage with my heart brimming with gratitude. I see my current situation in a positive light, and I like myself for being able to feel that way. I also love everybody who values my decision [to leave the band], so I guess in the words of Yoohei, “I love you all!” is how I feel now.

This article by Chinami Hachisuka first appeared on Billboard Japan.