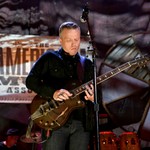 According to a statement from the venue, “we are all on the same page and we agree with what Jason Isbell would like to implement, but there is a timing issue.” The statement continues, “to implement a major change in policy such as what is requested will take more time than we have.”

Isbell contests those claims. “The pavilion statement is false,” he tweeted. “Live Nation, the promoter, was on board but the venue owner flat-out refused to even attempt to implement the policy.”

Earlier, Isbell laid out the strict new protocols. “We’re now requiring proof of vaccination or a current negative test to attend all our shows, indoors or out. If the venue won’t allow that, we won’t play,” he writes in one post.

Jason Isbell and The 400 Unit have tour dates on both sides of the Atlantic booked through November 2022.

His latest trek follows the release of Reunions, which peaked at No. 9 on the Billboard 200 following its release in May 2020.