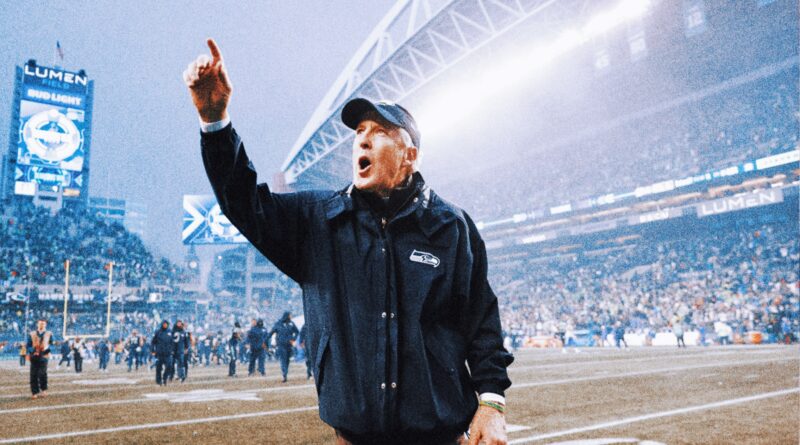 Jason Myers could have won the game at the end of regulation, but his 46-yard field-goal attempt bounced off the right upright.

No matter. Myers got a chance at redemption in overtime after Quandre Diggs intercepted a Baker Mayfield pass intended for Van Jefferson. And Myers drilled a 32-yarder through the uprights for a 19-16 Seattle Seahawks victory over the visiting Los Angeles Rams at Lumen Field on Sunday.

“We did everything we could to make the season as long as possible,” joked Seahawks head coach Pete Carroll afterward. “We squeezed every drop out of it.”

Seahawks clinch the win in OT

Seahawks kicker Jason Myers hits a 32-yard field goal after Quandre Diggs’ interception in OT and the Seahawks eke out a 19-16 win over the Rams.

The victory kept Seattle’s postseason hopes alive, as they finished a surprising 9-8 on the year after trading franchise quarterback Russell Wilson during the offseason.

With the OT win, the Seahawks had to await the Sunday night result of the final regular-season NFL game between the Detroit Lions and the Green Bay Packers at Lambeau Field. If Detroit won, the Seahawks would earn the No. 7 seed in the playoffs, facing their NFC West division rivals, the San Francisco 49ers, on the road next week.

“I’m glad that we’ve got a winning record and we gave ourselves a chance here,” Carroll said. “But that’s not what my expectations are. They never are — nowhere near that. I’m frustrated by this season. Where you all thought we did a lot of cool things and all that, I don’t feel like that.

“I feel like we missed our chances. We had five or six games there where we could have won easily one way or another, and we wouldn’t be sitting here talking about what’s going on with Detroit right now. That’s my torment.”

Seahawks head coach Pete Carroll sat down with Mark Sanchez to discuss the team’s season, Geno Smith and his love of coaching.

While the Hawks eked out a win, it was far from Seattle’s best game this season. Quarterback Geno Smith struggled for a second straight game, finishing 19-of-31 for 213 yards, including a pretty, 36-yard score on a deep ball to Tyler Lockett for Seattle’s only touchdown of the game, and two bad interceptions on passes he tried to force to DK Metcalf.

Smith was sacked three times and posted a 65.7 passer rating. However, he did drive Seattle into field-goal range at the end of regulation for Myers’ missed attempt, including a 25-yard run into L.A.’s territory. Smith was hit out of bounds by Jalen Ramsey on the play, who received a 15-yard unsportsmanlike penalty for the late hit.

With the offense scuffling, Seattle’s defense kept the Seahawks in the game for most of the contest. Seattle sacked Mayfield five times and held the Rams to 269 total yards on offense.

Rams running back Cam Akers was one of the few bright spots for L.A., finishing with 104 rushing yards on 21 carries. It was the third straight game in which the Florida State product ran for more than 100 yards.

Ken Walker III had a productive game on the ground for the Seahawks, totaling 114 yards on 29 carries, including two big runs to get Seattle into field-goal position in overtime.

Walker finished with 1,050 yards on the year, becoming the second rookie in franchise history with 1,000 rushing yards.

Rams linebacker Bobby Wagner, who played his first 10 years in the NFL with the Seahawks, returned to Seattle and received cheers from the crowd at Lumen Field, including some folks chanting his name.

Diggs pointed at Wagner after making his key interception in overtime that led to the winning score.

“I’ve always kind of been a menace,” Diggs said, “so for me it was just showing Big Bro I’ve got the ball and making a play to help the team.”

Diggs said he and Wagner exchanged jerseys after the game. Wagner also made his way to Seattle’s locker room afterward to say hello to some of his former teammates.

With the loss, the Rams finished the year at 5-12, heading into the offseason with major questions facing the defending Super Bowl champs. At the top of that list is whether head coach Sean McVay will return next season.

“I’m not thinking about that right now,” McVay said during his postgame press conference. “Nothing has changed from where we left off on Friday. I’m right here, right now. And we’ll deal with that stuff at a later time.”