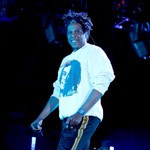 Jay-Z isn’t taking any sides, and Twitter has noticed. After appearing on Kanye West’s Donda track “Jail pt. 2” when it arrived (Aug. 29) and then promptly making a feature on Ye rival Drake’s long-awaited Certified Lover Boy with “Love All” on Friday (Sept. 3), listeners have taken to Twitter with hilarious takes on Jay-Z’s willingness to collaborate with both rappers.

One Twitter user wrote, “Jay-Z gave Kanye that weak image of god/selfie line and gave Drake a dissertation.” Another wrote, “Jay-Z understands something a lot of ppl do not: Drake and Kanye’s beef is THEIR beef, not ours. He couldn’t care less as long as you run his checks.”

And of course, there were those who took the opportunity to make viral memes of Jay-Z working with the feuding rappers, resulting in the rap mogul to trend on Twitter.