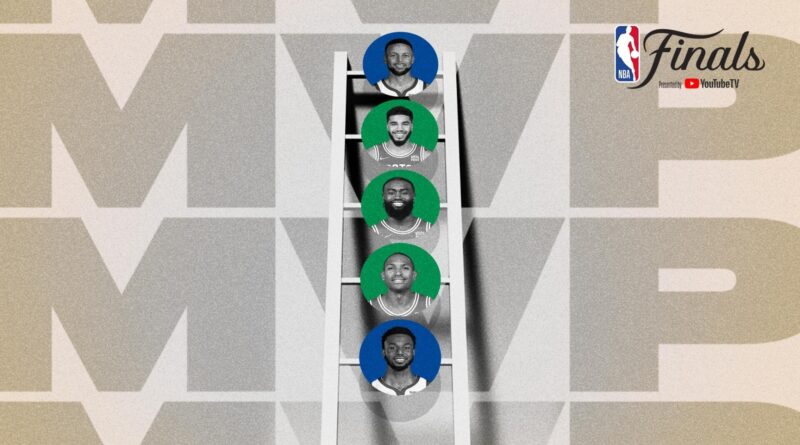 The NBA Finals has reached perhaps its most important stage: Games 3-5.

And as the back-and-forth series shifts to Boston for Games 3 and 4, “must-win” circumstances reach an entirely new level as both the Celtics and Warriors claw for an advantage. In fact, the winner of Game 3 in Finals that opened 1-1 has gone on to win the series 82.1% of the time (32-7).

The team that does come out on top will likely feature a top-echelon performance from one of its premier competitors, who in turn will spring up the Finals MVP leaderboard.

A few players have already done so in Games 1 and 2. According to Nick Wright, these are the five best Finals performers thus far:

Nick Wright ranks the remaining players in the NBA Finals. Watch to see why the Boston Celtics have more players on the ladder than the Golden State Warriors.

Note: Dashes are used to represent rungs on the ladder as figurative gaps between players.

Wright’s thoughts: “You know I believe in basketball gods. If the Warriors win the Finals with Andrew Wiggins winning Finals MVP, I’m going to have that moment the guy in the ‘Twilight Zone’ episode had, when he was at a casino and just kept winning every single bet and couldn’t lose, and then he slowly realized ‘wait, I’m in hell.’ I’m going to realize the basketball gods have put me in basketball hell.”

Wright’s thoughts: “Horford’s shooting a nice, tidy 63% from the field, helped greatly by the fact he didn’t shoot at all in Game 2.”

Wright’s thoughts: “Right now, Jaylen Brown is 8-1 to win it, and I told you before the Finals he was a smart bet a 10-1. I’m going to tell you right now — quietly, because I might try to get more money down after this segment — that I think he’s going to win it. He would be my bet, but right now he’s in third. He was 1-of-11 after the first quarter of Game 2, so he needs a bounce-back game.”

Wright’s thoughts: “This is obvious. I understand Kevin Wildes is very disappointed that Tatum is not having the Wilt Chamberlain 1962 season, where he averaged 50 points, 26 rebounds on 48 minutes per game. However, his raw numbers are not terrible. His shooting percentage obviously is because of the 3-for-17. Here’s what’s working against him: He cannot afford one more awful game. You’re only allowed to have two awful games unless you’re Kawhi Leonard or Andre Iguodala.”

Wright’s thoughts: “He’s been the best player in the Finals so far. I know what you’re thinking: ‘Nick, you’re picking the Celtics.’ I will stay consistent with this, even though part of this will grind my gears if Steph is the first modern player on a losing team to win Finals MVP. But that’s on the board if Steph continues to average 32 per game in a losing effort, and no Celtic distinguishes themselves as the outstanding player.”