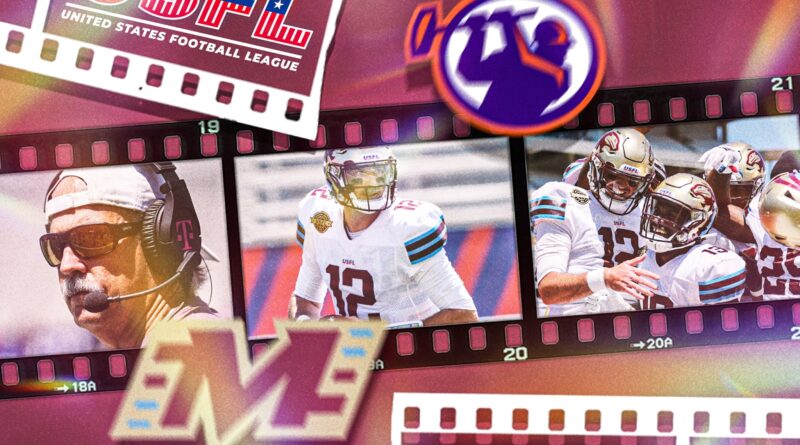 Yes, the Michigan Panthers finished amongst the bottom dwellers in the USFL this season.

However, with a 33-21 victory over the Pittsburgh Maulers on Sunday at Legion Field, the Panthers and head coach Jeff Fisher can at least take solace that the win earned the team the No. 1 overall pick in the 2023 draft.

After a late rule change by the USFL, the winner between the Panthers and the Maulers earned the No. 1 overall pick next year, along with the first pick in every round.

“It makes a lot of sense,” Fisher said. “It rewards you. It’s nice to win this game, so when the time comes we’ll have the pick — and so on throughout the draft.”

With the victory, the Panthers finished 2-8 on the year while the Maulers ended their season at 1-9.

Fisher also honored his father, Roger Fisher, on Father’s Day. Since the start of the USFL season, Fisher had been wearing his hat backward in homage to his father, who passed away in October 2020.

Paxton Lynch threw for 275 yards and three touchdowns en route to the Michigan Panthers’ 33-21 victory over the Pittsburgh Maulers.

“My dad shortly before he passed asked me if I ever was going to coach again,” Fisher said. “And I said, ‘I don’t know. But if I do, I will coach every snap with my hat on backwards in your honor.’ That’s why I put it on backwards to start the season.”

Fisher went on to say his father was a veteran who proudly served the country.

Michigan quarterback Paxton Lynch, a first-round selection by the Denver Broncos in the 2016 NFL draft, had a good day under center. The Memphis product finished 22-of-30 for 275 yards and three touchdown passes, with his only blemish an interception by Pittsburgh linebacker Blaze Alldredge at the end of the first half.

Lynch’s favorite target was Ishmael Hyman, who finished with six receptions for 71 yards and a touchdown.

“We were just able to get into a rhythm,” Lynch said. “I know it was kind of a tough week because we weren’t able to practice because of the weather and stuff like that, but I think that this group does a good job of always staying focused mentally, and never taking a day off. And however we’ve got to get reps, we find ways to do that.”

Turnovers and inconsistent play once again marred Pittsburgh. The Maulers turned it over three times and finished with eight accepted penalties for 70 yards.

Despite the mental errors and missed assignments, Pittsburgh head coach Kirby Wilson said he believes he can be a successful head coach moving forward.

“I know I can do this now,” Wilson said. “This was the big challenge for me, could I lead a group of men professionally? And I did that. And I’m very pleased with how I did that.

“The wins will come, but they all start with the foundation, the culture of respect and the discipline of being a professional. That’s the hardest part to overcome, and we feel good about that.”

The Maulers used a two-quarterback system. Vad Lee finished 12-of-22 for 157 yards, with two touchdowns and an interception. Roland Rivers completed 11-of-14 passes for 123 yards and a score.

Michigan also received some other good news: Two weeks after being taken off the field on a backboard and a stretcher, linebacker Tre Williams was back on the field for the Panthers. Williams totaled two combined tackles.