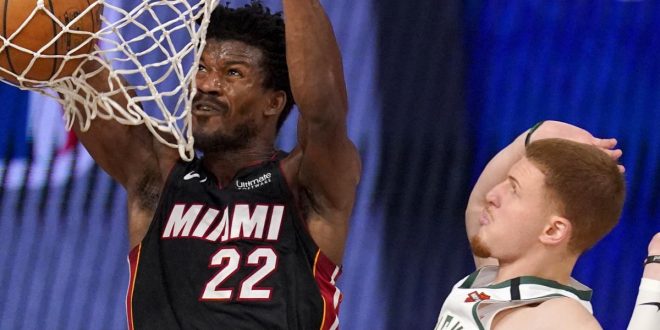 Jimmy Butler is the type of player you feel.

On defense and offense, in loss and victory, pregame and postgame, through practice and tales of 3 a.m. wake-up calls, you feel him. Hear about him. See him. His footprint is everywhere, his hand in everything, and he lets you know about it.

He galvanizes. He grates. You feel him when he’s there. You feel his absence when he’s not. He taunts. He trolls. He rescues. He defines, almost always for better, even when you might be convinced it’s for worse.

Just ask the Miami Heat, working through season No. 1 of the Jimmy Butler experience, on the heels of their 115-104 victory in Game 1 of an Eastern Conference semifinal. Or ask the Milwaukee Bucks, one of the league’s foremost title favorites, who were on the losing end of his 40-point detonation, which also happens to be his playoff career high.

Better yet, ask the Philadelphia 76ers, specifically Joel Embiid, who had Butler last season, signed and traded him to Miami, pivoted to a roster makeup straight out of the 1990s and are now watching the postseason unfold from home, without a head coach:

Ask the Minnesota Timberwolves, too:

At one point in a scrimmage, sources said, Butler turned to GM Scott Layden and screamed, “You (bleeping) need me. You can’t win without me.” Butler left teammates and coaches largely speechless. He dominated the gym in every way. Jimmy’s back.

In the grand scheme, Butler’s performance Monday night wasn’t a revelation, not for himself or Miami, not even for Milwaukee or Philadelphia. It was, for the most part, more of Butler being Butler, impacting games and influencing outcomes as superstars do. Call it a reinforcement, of everything, not an epiphany.

The Heat are used to nights like Monday. Butler is now entrenched as their heartbeat. The relentless pressure he puts on defenses—in addition to playing his own dogged defense—is standard.

Sure, the Bucks made life harder on him around the rim, where he butters his bread. He cooked them anyway. He finished 8-of-10 outside the restricted area, including 2-of-2 from three-point range, and still threw his usual parade to the free-throw line (12-of-13).

This didn’t quite feel like a takeover until the fourth quarter, which is weird, because Butler put in 25 points through three frames. That fourth quarter, and crunch time, was just something else. He tallied 15 points in just under nine minutes while attempting just one shot inside the restricted area, delivering dagger after dagger:

That is the luxury of Jimmy Butler. He is a closer. His game is built for it, made for it, even if the numbers might say otherwise.

He shot just 24.4 percent from deep and 38.4 percent on two-point jumpers during the regular season. His clutch-time splits weren’t great. So what? Miami will be content if he fires off shades-of-Kawhi Leonard jumpers, particularly when he’s so good at reaching the charity stripe anyway. Among every player to make at least 10 crunch-time appearances, only Embiid and James Harden averaged more free-throw attempts per 36 minutes.

Butler’s playmaking has proved pivotal to the Heat. He averaged a career-high six assists during the regular season. Cool story. He had a higher crunch-time usage rate than Luka Doncic and LeBron James. Table-setting isn’t his job down the stretch, with the game on the line. He’ll let you know about that, too:

Indeed, the Heat are trendy Miami-in-six picks for a number of reasons. Their defensive optionality is overwhelming, perhaps ready-made for the matchup with Milwaukee.

If you could construct a player specifically for the sake of harassing Giannis Antetokounmpo, it might be Bam Adebayo. And yet Adebayo wasn’t his primary defender in Game 1. Miami threw Jae Crowder, Andre Iguodala and, yes, Butler at him, as well. It worked.

Antetokounmpo appeared less than deific. He took just four shots in the restricted area, converting two, and only 12 overall. He did attempt 12 free throws, of which he made four, but the Heat by and large succeeded at keeping him away from the basket and coaxing the ball out of his hands.

Their chances are also buoyed by their own shot-making. The Bucks invite threes, and the Heat feast on them. Milwaukee neutralized human flamethrower Duncan Robinson, and it didn’t matter. Miami always has enough shooters.

Tyler Herro went 3-of-6 from distance. Crowder went 3-of-7. Disney World Jimmy Butler is more deliberate with his three-point attempts, and he’s actually making them.

Goran Dragic sleeps in fireproof pajamas. Adebayo doesn’t need to hit the mid-range jumpers the Bucks leave for him to make an impact, but he did. His playmaking will be a boon if the Heat plan to dictate a half-court-oriented pace.

Everything else that renders Miami a tantalizing upset consideration is still secondary to Butler, and what he represents.

Over the course of a series, especially this series, he may not be the best player on the floor. On any given night, in any given moment, he might be. Every contender, at minimum, needs that. Butler is it.

It sounds foolish at first reading, a declaration of the obvious. But this isn’t obvious—or at least not obvious enough. Chicago willingly traded him. Minnesota botched…something—chemistry, prioritizing the financial flexibility to renegotiate his contract, something. Philly didn’t make him enough of a priority.

This isn’t revisionist history for the sake of propping up Butler. The Bulls have few excuses. Butler was in the top-10 discussion with them. The Timberwolves might deserve some leeway. Butler’s exit was needlessly messy. Part of that is on him. Another part of that, the larger part, is on then coach-president Tom Thibodeau for not acting sooner despite having the information and means necessary to pull the ripcord.

The end to Butler’s time with the Sixers was complicated. It doesn’t appear to be a matter of his simply leaving or their refusing to give him the full five-year max. His fit with Ben Simmons, his relationship with then-head coach Brett Brown and Philly’s need to shore up the center minutes behind Embiid all factored in:

No one would accuse me of being a Sixers apologist, but If we’re gonna re-litigate the decision to let Butler go I do think it’s important to have all proper context:

Butler reiterated a lot of this during a March appearance on The JJ Redick Podcast while also diving into the problem of the Sixers’ opaque organizational structure (via the Miami Herald‘s Anthony Chiang): “It was difficult. It was so different. On any given day, me as a person and as a player, I didn’t know who the [expletive] was in charge. I think that was my biggest thing. I didn’t know what the [expletive] to expect whenever I would go into the gym, whenever I go into the plane, whenever I got into the game.”

None of this is enough to explain Butler’s departure. Nor does his price tag. They invested nearly $300 million in Tobias Harris and Al Horford. Butler’s five-year max would’ve run less than $10 million more than they paid Harris. Even if Butler badly wanted out, his leverage was minimal. Miami didn’t have cap space. Philly actively facilitated his exit.

Look, if you guys remove yourselves from Sixers fandom, it’s genuinely hilarious to watch the franchise player openly subtweeting his own front office as the guy he wanted to keep on the team roasts the team they explicitly shaped the roster to beat in the playoffs

Once more: This all seems obvious now. It didn’t quite unfurl that way. The Sixers weren’t as thoroughly destroyed for their decision-making last summer. Criticism topped out at, roughly, morbid curiosity.

Still, this isn’t about the team(s) for which Butler used to play. It isn’t even about the one he plays for now. It is about his being a championship cornerstone, an obvious one, the type you always feel—and go great lengths to not only get but to keep.