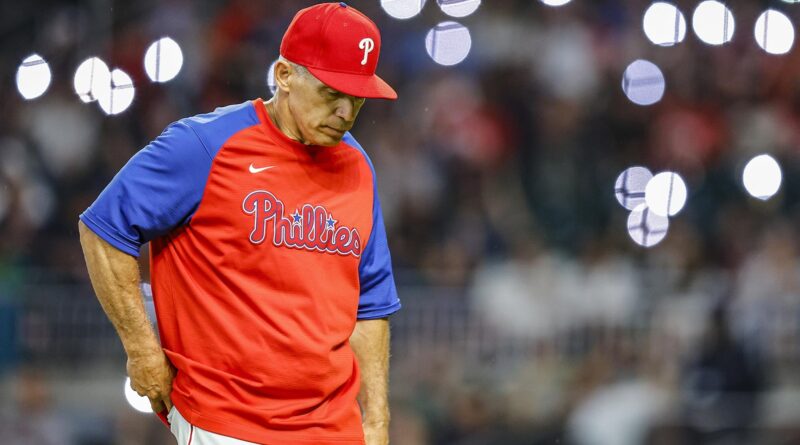 Joe Girardi was fired by the Philadelphia Phillies on Friday after his team’s terrible start, becoming the first major league manager to lose his job this season.

Philadelphia said bench coach Rob Thomson will become interim manager for the rest of the season.

Expected to contend for an NL East title, the Phillies are 22-29 and 12 games behind the first-place New York Mets.

“It has been a frustrating season for us up until this point, as we feel that our club has not played up to its capabilities,” Phillies president of baseball operations Dave Dombrowski said in a statement. “While all of us share the responsibility for the shortcomings, I felt that a change was needed and that a new voice in the clubhouse would give us the best chance to turn things around. I believe we have a talented group that can get back on track, and I am confident that Rob, with his experience and familiarity with our club, is the right man to lead us going forward.”

Girardi’s first year with Philadelphia was the pandemic-shortened 2020 season. The Phillies went 82-80 last year and he ends his tenure with a 132-141 record. Girardi managed the New York Yankees from 2008-17 and the Florida Marlins in 2006.

The Phillies have lost 12 of 17 games heading into the opener of Friday’s three-game series against the Los Angeles Angels.

The Phillies have a $224 million payroll and boast 2021 NL MVP Bryce Harper and NL Cy Young Award runner-up Zack Wheeler, Aaron Nola, All-Star catcher J.T. Realmuto and free-agent sluggers Nick Castellanos and Kyle Schwarber. Yet Philadelphia hasn’t made the playoffs since 2011, hasn’t won the World Series since 2008 and has watched fan interest plummet through a decade-plus of mediocre baseball.

Harper has been plagued most of the season with right forearm soreness and was forced to give up right field and play designated hitter. Second baseman Jean Segura is out for up to three months with a fractured right index finger. The Phillies are 12-15 at home and are 4-10 in one-run games. They are 3-7 over their last 10 games.

Girardi replaced Yankees manager Joe Torre after the 2007 season and spent a decade in pinstripes. Girardi led New York to its 27th World Series title, beating the Phillies in six games in 2009, and his 910 wins were the sixth most in team history.

Girardi said last week the season was “frustrating” but he was not concerned about losing his job. Girardi, though, likely had to make the playoffs this season after the Phillies declined to pick up his option for 2023.

Philadelphia’s struggles go well beyond Girardi. Gabe Kapler was fired after a 161-163 record in two seasons and then led the San Francisco Giants to a 107-55 record and the playoffs last season.

Thomson was Philadelphia’s bench coach and coordinated spring training for the last five seasons. He was hired before the 2018 season.

“I am ready to lead this team and look forward to getting to work and turning this around,” he said.

His first game is against an Angels team that has lost eight straight games overall and six straight on the road.

Reporting by the Associated Press.