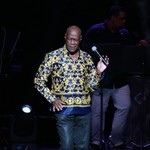 Born in La Vega, Dominican Republic, Ventura kicked off his career in the early ‘60s and was coined as “El Caballo Negro.” Some of his biggest titles include tropical hits such as “Patacon Pisao,” “¿Pitaste?” and “Merenguero Hasta la Tambora,” all of which have become staples in Latin households.

Ventura’s timeless music has entered various Billboard charts, including Hot Latin Songs, Top Latin Albums, Tropical Airplay and Tropical Albums. From 1994 to 1998, Ventura also served as vice mayor of Santo Domingo and as mayor from 1998 to 2002.

On social media, artists such as Olga Tañon and Manny Cruz, among others, reacted to his death.

“My admiration for you always,” Tañon wrote on Instagram. “You always treated me with so much affection and respect! I made my dream of recording with you a reality! You are a great defender of merengue music for the whole world!”