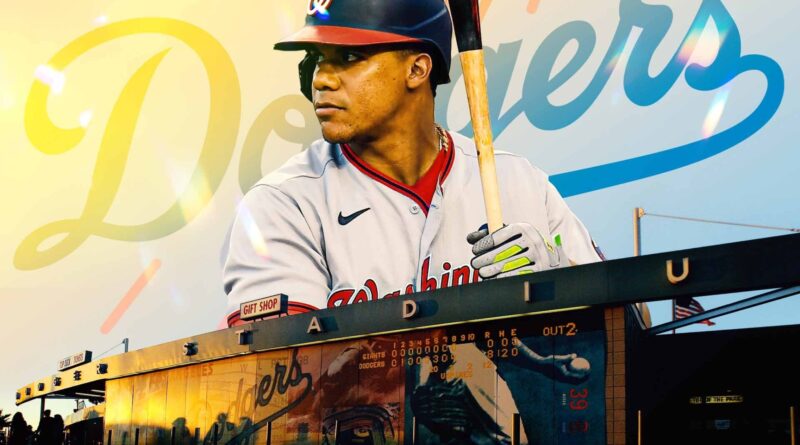 The “fu-ture Dod-ger” chants that greeted Juan Soto in center field at Dodger Stadium during the All-Star Game resumed Monday, with the Nationals paying a visit to Los Angeles.

A week ago, Soto heard the chorus from the bleachers. He turned around and grinned to acknowledge the support. On Monday, the chants came before the coveted trade target tripled and knocked in two runs to snap the Dodgers’ eight-game winning streak.

Since the moment Soto reportedly turned down a 15-year, $440 million extension from the Nationals, trade rumors have swirled around the precocious, 23-year-old two-time All-Star. And as comfortable as Soto has looked on the field dealing with them, from winning the Home Run Derby last week to delivering a knockout blow to the Dodgers one week later, it’s an unfamiliar situation that the preternatural talent never anticipated.

“It’s just been crazy, things that I never think were going to happen to me,” Soto told reporters Monday in Los Angeles before the Nationals’ 4-1 win. “First time I’m going through it, and it’s been pretty tough.”

FOX Sports’ Ben Verlander tells us who he believes are the five teams most likely to swing a trade for Juan Soto.

Soto was surprised to hear the chants at the All-Star Game, but he enjoyed them, flattered to hear fans in Los Angeles cheering for him. They, of course, want to root him on in a Dodgers jersey. Fan bases of every contending team, in fact, hope Soto soon dons their uniform.

At just 23, Soto is already a franchise-altering player. Through his age, the closest Baseball Reference similarity scores are Mike Trout, Frank Robinson and Bryce Harper. Soto’s career OPS+ (160) ranks higher than those of Hall of Famers such as Hank Aaron, Willie Mays and Joe DiMaggio. He is a generational talent whose best years are likely still ahead.

“He’s intimidating in the box,” said Dodgers All-Star pitcher Tony Gonsolin, the recipient of Soto’s triple on Monday. “He’s got a really good two-strike approach. He widens out, does his whole thing, has very good control of the zone, doesn’t chase ever. I don’t think he chased a single ball off me.”

Maybe soon, Gonsolin won’t have to face Soto in a Washington jersey, though Soto said he still never really thinks about joining another team and will remain loyal to the Nationals as long as they want him.

The haul to obtain such a talent would be monumental. And three postseasons with Soto could be worth it for a contending club.

It is not often that a player of Soto’s extraordinary talent, under control as long as he is, becomes available. The Nationals are listening to offers, though they are under no pressure to deal Soto immediately. He isn’t a free agent until after the 2024 season, making the cost to acquire him exorbitant, even for a Nationals team with the worst record in baseball. For the lucky organization, it could mean parting with five or six top prospects or a combination of top prospects and young, controllable, major-league-ready players.

In recent years, the Dodgers have demonstrated a willingness to add franchise-altering players at the deadline when opportunity knocks. In 2017, they added Yu Darvish. A year later, they added Manny Machado. Both additions cost a medley of highly regarded minor-leaguers, but the Dodgers swung both deals while holding on to their most prized prospects.

Last year’s trade deadline deal for Max Scherzer and Trea Turner meant parting with more. Trailing by three games in the division entering the deadline, the Dodgers dealt their top position-player prospect (Keibert Ruiz) and pitching prospect (Josiah Gray) along with two other prospects (Gerardo Carrillo and Donovan Casey) to add a sixth and seventh All-Star to their 2021 roster. Scherzer was a rental for the year, while Turner is a free agent after this season.

That deal would pale in comparison to the cost of acquiring Soto, who began to understand the business of baseball while watching his teammates depart. In two years, his franchise went from winning a World Series to rebooting.

“It was pretty tough, but at the same time, I was happy for them,” Soto said. “They went to a competitive team. They could go all the way and win the World Series. Didn’t happen to any of them, but I’m glad they get to experience the playoffs and all that kind of stuff.”

Soto was there to cheer on his old teammates during the Dodgers’ 2021 wild-card game, sitting behind home plate in a Turner jersey. The two have kept in touch since Turner joined the Dodgers, though Soto said the conversations are more personal than professional.

Turner believes Soto is equipped to handle the stresses of deadline chatter, even at his young age.

“He’s been a professional every step of the way, from when he was 19 and called up,” Turner said. “So I think every year he learns that it’s a business, and it gets a little harder. I think he started to learn that last year a little bit when everyone got traded and whatnot. But I expect him to be a professional and handle his business and be a good person about it, and I think that’s what you’re going to get from him.”

The Dodgers are again among the teams with both championship aspirations and — even after their recent deadline deals — the rich farm system required to bring in a player of Soto’s stature. They have four prospects ranked in MLB.com’s top 50 in catcher Diego Cartaya, pitcher Bobby Miller, infielder Michael Busch and outfielder Andy Pages.

Of course, acquiring Soto before the Aug. 2 trade deadline could mean parting with any or all of them, plus more.

Still, manager Dave Roberts isn’t concerned the speculation will cause a distraction.

As the Dodgers saw Monday, that’s easier said than done.

Rowan Kavner covers the Dodgers and NL West for FOX Sports. A proud LSU alumnus, he credits his time as a sportswriter and editor at The Daily Reveille for preparing him for a career covering the NFL, NBA and MLB. Prior to joining FOX, he worked as the Dodgers’ editor of digital and print publications. When not at a stadium or watching sports, Rowan enjoys playing with his dog, hiking, running, golfing and reminiscing about the Mavs’ 2011 championship run. You can find him on Twitter at @RowanKavner.