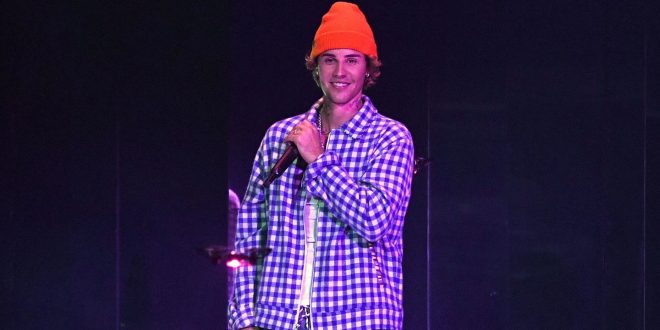 Last Sunday night found Justin Bieber picking up his second-ever Grammy, a notable accolade given the song it accompanied: “10,000 Hours,” the country-pop team-up between Biebs and Dan + Shay. Considering Bieber’s first Grammy win was for the EDM-pop “Where Are Ü Now” with Diplo and Skrillex, his latest win five years later is a testament to not only his versatility, but his continued musical evolution.

Case in point: Justice, the artist’s sixth studio album out today (March 19). It’s loaded with collaborators, including Khalid, Chance the Rapper, Burna Boy, Dominic Fike, and more. It opens with a Martin Luther King quote and devotes an entire track to a speech he gave near the end of his life. It spans the gospel-pop we first heard on “Holy” and dips into synthpop (“Die For You”), acoustic songs of praise (“Ghost”), and the long-awaited studio rendition of “Peaches,” which he debuted in full this week as part of an NPR Music Tiny Desk Concert.

This is Bieber at his most multifaceted. And there’s something very welcoming about seeing him continue on in several directions, considering how last year’s romantic Changes stayed more or less in a singular lane — the same drive that caused him to call out the Grammys for nominating in the pop categories instead of R&B. “It is not being acknowledged as an R&B album which is very strange to me,” he wrote in an Instagram post when nominations were announced in November 2020. “I grew up admiring R&B music and wished to make a project that would embody that sound.”

The scope of Justice is wider. A first listen reveals that the varying styles might just point less to Bieber’s future and more to his state of mind while making it — or both. “My objective in making this album was to provide comfort to the listener,” he said on a recent Zoom, per Vogue. “I know a lot of people have been isolated, but music is really an outlet to bring people together.”

Come together and listen to Justice, now that it’s out in the world, below.