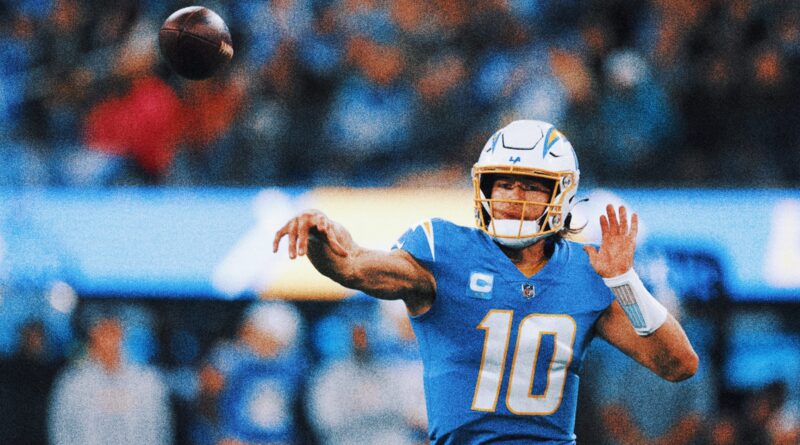 Los Angeles Chargers head coach Brandon Staley pumped his fist as his quarterback, Justin Herbert, threw yet another dart, this one a 9-yard completion on an out route that whizzed past the ear of Miami Dolphins cornerback Kader Kohou to receiver Keenan Allen for a critical first down with 10:05 left in the fourth quarter.

Allen pointed to Herbert after the play. Herbert enthusiastically pointed back.

“The pass was amazing,” Allen said. “Just being on the same page on third down, when we had to have it. And just having that trust. He was able to throw a laser.”

The impressive throw was a prime example of the precision accuracy that Herbert put on display all evening.

The much-hyped shootout between Herbert and 2020 draft classmate Tua Tagovailoa never really materialized on Sunday at SoFi Stadium. While Herbert sizzled, Tagovailoa and the Miami offense performed like they were stuck in mud most of the night.

The result was an important, 23-17 victory for the Bolts, keeping them in the postseason conversation by improving to 7-6 overall.

With the loss, the Dolphins dropped their second game in a row, falling to 8-5 on the year.

Herbert finished 39-of-51 for 367 yards and a touchdown, posting a 102.2 passer rating. He completed passes to nine different receivers.

Herbert received a game ball afterward from Staley. He downplayed the matchup with Tagovailoa most of the week leading up to Sunday’s contest and heaped praised on his teammates for the big win.

“We’ve got a lot of respect for Tua,” Herbert said. “He’s an incredible quarterback. He’s made some big plays this year. I think it’s just a credit to our defense for the week of preparation they put in together.”

With his effort, Herbert (13,056) passed Andrew Luck (12,957) for the most passing yards through the first three NFL seasons in league history. While Herbert remained reluctant to puff his chest, his teammates did the talking.

“He’s the X-factor,” receiver Mike Williams said. “Obviously, he’s been doing that since he’s been here. Everybody knows what type of player he is. He believes in this team, and we’ve just got to continue to follow him.”

Added Allen: “He’s just starting. He’s about to blow this league away.”

L.A.’s top three receivers in Josh Palmer, Allen and Williams had played a total of five snaps together entering Sunday’s contest. With all three on the field, the Chargers finally looked like the dangerous offense NFL observers expected at the start of the season.

Miami’s first touchdown came on a fluky fumble recovery for a score. Tyreek Hill returned a Jeff Wilson Jr. fumble for a 57-yard touchdown. Hill got the ball when left tackle Terron Armstead flipped it out of a scrum after safety Alohi Gilman stripped Wilson of the ball.

Midway through the third quarter, Tagovailoa found Hill for a 60-yard touchdown when cornerback Michael Davis fell down in coverage, cutting L.A.’s advantage to 17-14. But that would be as close as Miami would get.

Playing without frontline players like defensive end Joey Bosa, safety Derwin James, defensive tackle Sebastian Joseph-Day and defensive back Bryce Callahan, Staley did a masterful job of taking away what Miami does well — throwing in the middle of the field and taking deep shots.

One of the worst run defenses statistically in the NFL, the Bolts also held Miami to 92 yards rushing.

Staley summed up the Chargers’ defensive approach even more simply.