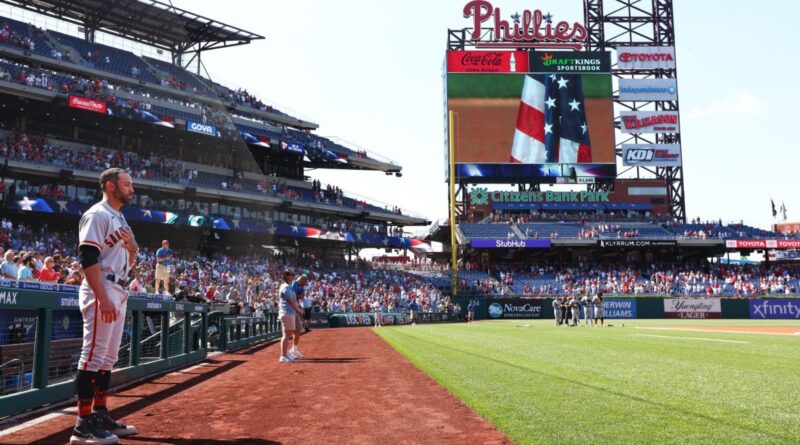 San Francisco Giants manager Gabe Kapler stood when the national anthem was played before his team’s game against the Philadelphia Phillies on Memorial Day.

Kapler, who began his protest against the direction of the nation on Friday, stood by himself at the railing of the Giants dugout during the playing of taps during the holiday ceremony, which was followed by a rendition of “The Star-Spangled Banner” by a military bugle company.

A few other San Francisco players stood on the chalk line past the third-base bag during their stretching exercises.

“Today, I’ll be standing for the anthem,” Kapler said Monday on his blog. “While I believe strongly in the right to protest and the importance of doing so, I also believe strongly in honoring and mourning our country’s service men and women who fought and died for that right. Those who serve in our military, and especially those who have paid the ultimate price for our rights and freedoms, deserve that acknowledgment and respect, and I am honored to stand on the line today to show mine.”

Kapler had been avoiding the field during the national anthem as a protest after last week’s school shooting in Uvalde, Texas, but he said Sunday that he was considering suspending his protest in light of Monday being Memorial Day.

“I’m very comfortable taking it day by day,” Kapler said Sunday of his protest. “I think I’ll just decide what makes the most sense in the moment.”

“Memorial Day is an important day in our country’s history and a special day and a unique day,” he said. “I find it to be one that deserves special attention.”

On Friday, Kapler used his personal blog to discuss the mass shooting Tuesday that left 19 children and two teachers dead in Texas. The attack occurred just 10 days after a gunman espousing racist hatred killed 10 Black people at a supermarket in Buffalo, New York.

“Every time I place my hand over my heart and remove my hat, I’m participating in a self congratulatory glorification of the ONLY country where these mass shootings take place,” Kapler wrote on his blog.

Kapler said he was not ready to announce whether his protest will resume on Tuesday night.

“The days move really fast,” he said. “We’re going to come out and talk about Giants and Phillies today and we’ll get into the game and then we’ll spend some time trying to get away from the game. Then the game starts the next day. I want to have my thoughts perfectly formulated. I will formulate them and I will share them. I just don’t have them right now.”

“Everyone has a choice in this country, right?” Girardi said. “I mean that’s what America is founded on. It’s not the choice that I’ll make. But with all the choices we make in life there are consequences, no matter what you do, so you have to be prepared to explain why you do things in this world. And it’s not something that I would do.”