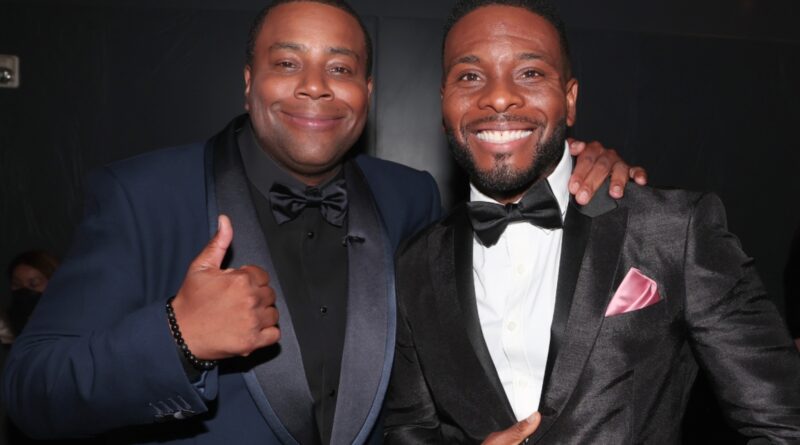 Kenan Thompson, Kel Mitchell and orange soda reunited for the most recent episode of Saturday Night Live in a sketch that sees Keke Palmer and the two comedians caught in a soapy love triangle storyline with a pregnancy twist.

Thompson and Mitchell, who became teen stars thanks to their work on All That and later their beloved titular roles in the 1996 Nickelodeon sitcom Kenan and Kel, appeared on the Dec. 3 episode as part of a sketch reimaging the show decades after it went off the air. Dubbed Kenan and Kelly, SNL host Keke Palmer is the one who pitched the faux series, which offers an aged-up dramatic spin on the comedic shenanigans the original kids show was known for.

The sketch opens with Palmer selling Thompson on the reboot that will see her replace Kel as “Kelly” in the title card. That’s right before the SNL cast member reveals that what he thought was going to be a “Jordan Peele-produced streaming series” was nothing of the sort.

“I had already sold the show before I even met Kenan,” Palmer hilariously reveals in a confessional. “I told the producers we wrote it together.”

Returning to the original series’ ridiculous antics, Palmer puts her own spin on the world of the popular ’90s sitcom — including swapping out Kel’s famous catchphrase “Aw, here it goes!” with “Oh, here comes the bus!” But she also adds darker, more dramatically soapy elements, including a store shooting and pregnancy storyline.

“Keke was gunning for an Emmy Award so she wanted gritty, dramatic moments in it,” Thompson says in his own confessional. “I thought, ‘That won’t work.’ And I was right.”

After Palmer — who incorporated her newly announced pregnancy into her character’s storyline — delivers over-the-top monologues about being pregnant with Thompson’s child and having a distraught, fatherless childhood, Kel seemingly arrives to reunite with his old screen partner but is overcome by his love for orange soda.

“Well, we just started and I think we have a tone issue, but people seem excited about it, I guess,” Thomspon remarks before fellow SNL cast member Devon Walker offers a spot-on impression of Mitchell’s character — braided wig and all.

The skit ends on a dramatic and comedic high note, with Kel getting shot while attempting to stop a store robbery and Palmer revealing the baby is actually his, not Kenan’s.

“The show is not good, but Jordan Peele called us,” Thomspon says before Mitchell adds, “He wants us to do a sequel to Nope.”

The reunion is the latest from the former onscreen duo, who also reunited at this year’s Emmys, appeared onstage at the 2019 NHL awards together and starred in a Good Burger skit on The Tonight Show Starring Jimmy Fallon in 2015.