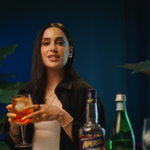 What’s your favorite thing to do in the summer?

I live in California so it’s like summer year-round for me, but I love to lay by the pool or go to the beaches to read and recharge. I really do miss the pre-COVID LA day parties too.

Do you remember a summer that stands out?

Summer of 2018 was hectic but in a good way. I got to DJ some of my bucket list festivals and I had a Vegas residency and a bunch of other shows in between which were super memorable but also challenging. My computer shut down on stage in front of thousands of people at one festival from the heat, and I basically just had to ramble on the mic to keep people engaged until we could get things back up and running. After all these things, though, I realized — I can handle anything. And no matter what crazy stuff happens, I can get through it.

When you’re DJing in the summer, what’s one song that always gets the crowd going?

I wouldn’t say there’s one song exactly but there’s nothing like a proper late 90’s or early 2000’s R&B set that gets people in the right mood.

I do really love Bali but probably would want to hit up some beautiful little beach towns in Italy and France.

Tell us about the playlist you made. What are the standout songs?

It’s literally like mid-tempo body roll energy. Everything from WizKid and Rema to Kehlani, Kaytranada, and A Tribe Called Quest.

What’s the song of summer this year?

Normally you can pick a “song of the…” so easily because all the clubs are open and there’s a really obvious song that everyone goes crazy for. But since we don’t have that same party culture at the moment I feel like that song isn’t there? It’s really up to whatever everyone personally likes to listen to in their car or home or life. Aside from all that though I definitely am having a major guilty pleasure moment and blasting Olivia Rodrigo.