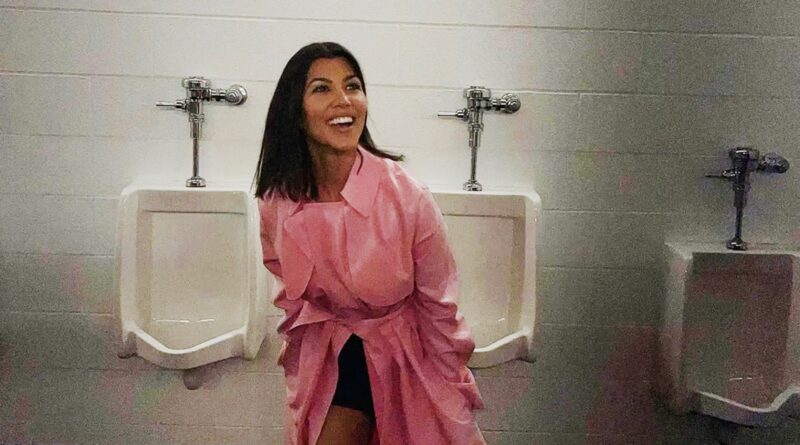 It’s not usually good to spy someone loitering in a trench coat in the men’s restroom — unless it’s Kourtney Kardashian putting a grunge spin on summer’s Barbiecore trend.

The Poosh founder struck a pose in the venue’s men’s bathroom, smiling in front of a wall of urinals in her bubblegum-hued Kwaidan Editions coat ($1,475, originally $2,950) layered atop black lace lingerie.

On Instagram Stories, the reality star shared she did her own hair and makeup “the same ways I always do it” for the low-key shoot describing her simple beauty beat as “super minimal.”

Some followers weren’t as wowed by the unexpected backdrop. “I love you but why are you in the men’s bathroom?” one fan questioned, as another eagle-eyed commenter pointed out, “not the pee in the urinal.”

These photos come just days after Kourtney showed off her life as a “tour wife,” sharing a snap of herself and her spouse canoodling at another MGK show.

And there’s really no better way to embrace the tour wife life than by venturing into dingy concert bathrooms.