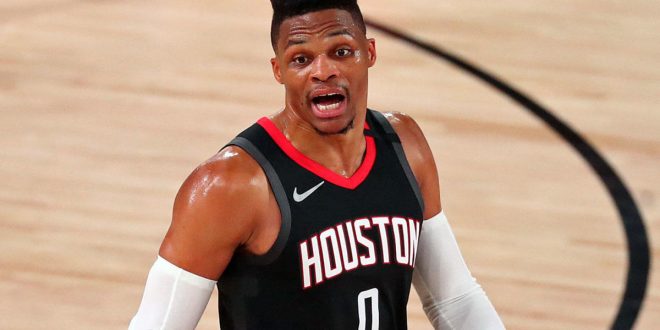 The Houston Rockets were eliminated from the 2020 NBA playoffs on Saturday, as the Los Angeles Lakers completed a gentleman’s sweep with a 119-96 victory in Game 5. On its face, it’s not a surprising result. The Rockets were a No. 4 seed. They needed seven games to squeak past the Thunder in the first round. The Lakers are a No. 1 seed. They have, irrefutably, two of the top three players still alive in the playoffs. They’re a bigger and better team than Houston.

But somewhere along the line we attached inflated expectations to the Rockets, in part because they have James Harden, in part because it’s been burned into our heads that their mathematic approach to basketball somehow makes them less beholden to the actual talent on their roster, and also because we all still remember them coming this close to knocking off the Kevin Durant-Steph Curry Warriors in the 2018 Western Conference finals.

But the Rockets aren’t that team anymore.

That team had Chris Paul. This one has Russell Westbrook. That’s where we’ll start with what has gone wrong for this Rockets team, and where it can possibly go from here.

Russ was a bust.

There’s a lot more going on with this closing Houston window — if it hasn’t already slammed shut — than the shortcomings of one player, and this isn’t to put everything on Westbrook. But he’s just not as good as Paul. Not in a vacuum, and certainly inside this Rockets system that desperately needs a second elite playmaker/high-level shooter to offset the attention Harden draws. Paul, in effect, was the C.J. McCollum to Harden’s Damian Lillard.

It’s clear that Westbrook just isn’t anywhere near that class of player anymore, despite the fact that he had a terrific regular season; from January through the shutdown you could’ve argued he belonged on the fringes of the MVP conversation, when he trimmed his 3-point attempts down to bare bones and focused almost entirely on attacking the rim via the increased space created by Houston’s decision to trade Clint Capela and commit to full-time small-ball.

It was a fun experiment that reinvigorated the rapidly dwindling enthusiasm surrounding the Rockets, probably even within their own locker room. They beat the Lakers the first night Robert Covington showed up on Feb. 6. They beat the Bucks in the bubble. We all tried to talk ourselves into the Rockets being unconventional enough to give the traditional Lakers trouble. After Houston won Game 1, the masses fully bought into the hype.

It wasn’t exactly fraudulent. The Rockets were in position to win both Games 2 and 3. But after folding the tent in Games 4 and 5, it’s a convenient time to remember the Rockets were only 12-10 after the Capela trade — 8-6 pre-COVID shutdown, and 4-4 in the eight bubble seeding games. They were never really that good.

It’s true, Westbrook missed a handful of those games. And that’s what gave everyone hope. But to rely on Westbrook at this point in his career, come playoff time, is false hope. After finally dropping 3-pointers and pull-up mid-range attempts from his arsenal leading up to the bubble, Westbrook fired 27 threes against the Lakers, making seven of them. That’s 25 percent. Throw in 53 percent from the free throw line, and under 35 percent on all shots outside five feet, and yeah, that’s not going to cut it.

Westbrook, obviously, doesn’t make nearly enough of those shots to justify the attempts, but beyond the glaring inefficiency, it’s a microcosm for how the Rockets put themselves in an impossible position by trading for Westbrook in the first place: Either rebuild your team to take advantage of what he can do, or die at the hands of what he can’t do. Turns out they were dead either way.

Perhaps the Rockets still would’ve gone small and traded Capela with Paul on board, but with Westbrook, there was just no other choice. They had to open the lane for drives, because Westbrook is something not too far from worthless as a floor spacer. That is maximizing a limited player over, perhaps, the team as a whole. So Westbrook had a great second half of the season. But you know the deal: The playoffs, as the cliche goes, are different. In the playoffs, unless you’re LeBron James or Kawhi Leonard, defenses are usually able to cut into what you do best, if not take it away entirely, thus forcing you to tap into second and third dimensions.

But Westbrook is a one-dimensional scorer. We saw that predictable, head-down offense doesn’t work even with a physical freak like Giannis Antetokounmpo, and Westbrook is no Antetokounmpo. The Lakers weren’t concerned about Westbrook in the slightest. That is, obviously, a major problem when Harden is facing unrelenting, late-clock double teams designed to make somebody else make a play. Westbrook is the only guy who can theoretically do that, because the Rockets chose to fill out the rest of their roster with spot-up shooters who can’t be relied on to create off the dribble.

By Game 5, with Harden off the floor and Westbrook on, the Lakers were literally running a box and one on … Eric Gordon. Listen, as the Raptors showed in the Boston series when they sprung that defense on Kemba Walker, there are reasons to unleash a box and one defense outside of not fearing any player outside the one you’re boxing. But to slap a box and one on Gordon, not Westbrook, is about as telling as it gets.

Yes, Harden needs to make his own adjustments. He could start by looking like he cares. The guy doesn’t exactly have a history of coming up big in big moments, and he was virtually nonexistent in too many fourth quarters in these playoffs. He was awful against OKC in Game 7. He didn’t take a single fourth-quarter shot in Game 4 against the Lakers. Through the first four games vs. L.A., Harden averaged fewer than three shots and five points in the fourth quarter. There’s making the right play when you are getting double teamed, and there’s refusing to let your team go down without getting in the fight. Harden needs to find a middle ground.

The Lakers were coming with their doubles late in the clock, and Harden waited until Game 5 to finally start going quicker, before the second man arrived. He’s just a lazy player too often. He accepts the double, passes out, then doesn’t move another inch. He is the most dangerous player on the floor for the Rockets, and he takes himself out of virtually every possession as soon as he passes the ball. He can only beat you one way, as a one-on-one scorer, and even his options within that context are not as dependable as they seem in the regular season.

Steph Curry arguably becomes more dangerous when he takes to relocating after he gives up the ball. That’s a multi-layered scorer. That’s what the playoffs demand. Being able to beat teams multiple ways. Remember that the next time you try to compare Curry and Harden, to say nothing of the latter’s dependence on volume 3-point shooting over actual high-level accuracy. Harden is a 33-percent playoff 3-point shooter for his career. Big picture, that’s going to be tough to overcome when you’ve been designated as your team’s whole hope.

None of this is to completely absolve Mike D’Antoni, either. He could’ve tried some adjustments earlier in the series. He waited until Game 5 to start having Harden’s ball screen set farther out so he could get going downhill before the double arrived. He didn’t trust his bench at all, even though Ben McLemore is arguably the best floor-spacing 3-point shooter he has, especially after Houston lost Danuel House, which was a bigger deal than we’ll make it but certainly not the difference in this series.

But in the end, D’Antoni is pretty bound by the roster at his disposal. The Rockets have devised a plan entirely dependent on two players creating everything, and one of those guys can’t be depended on. They won’t shoot even short midrange shots, so again, they’re predictable, which is a death sentence in the playoffs. They believe in the math, but numbers play out over time. Playoff series are short, even more so if you aren’t hitting 3-pointers.

The Rockets have no other way to beat you, and they have very few options for changing that reality moving forward. They don’t have any cap space. They don’t have any young players anyone would want, perhaps outside of House, and even he, combined with a marginally meaningful future draft pick (that chest is already pretty bare, too) isn’t going to fetch anything significant enough to up and change the short-term fortunes of this organization.

Plus, the owner doesn’t want to spend any money. They’ve gone out of their way to avoid the luxury tax the past two season, and letting Trevor Ariza walk after nearly beating the Warriors in 2018 was perhaps the original sin in the impending demise of this one-time contender. But if feels like trading for Westbrook is what officially closed the window. That’s what Harden wanted. He didn’t want to keep playing with Paul, who is just irrefutably better than Westbrook, and there aren’t any take-backs in the NBA. All you can do is move forward, even if the prospects for doing so in Houston are anything but promising.