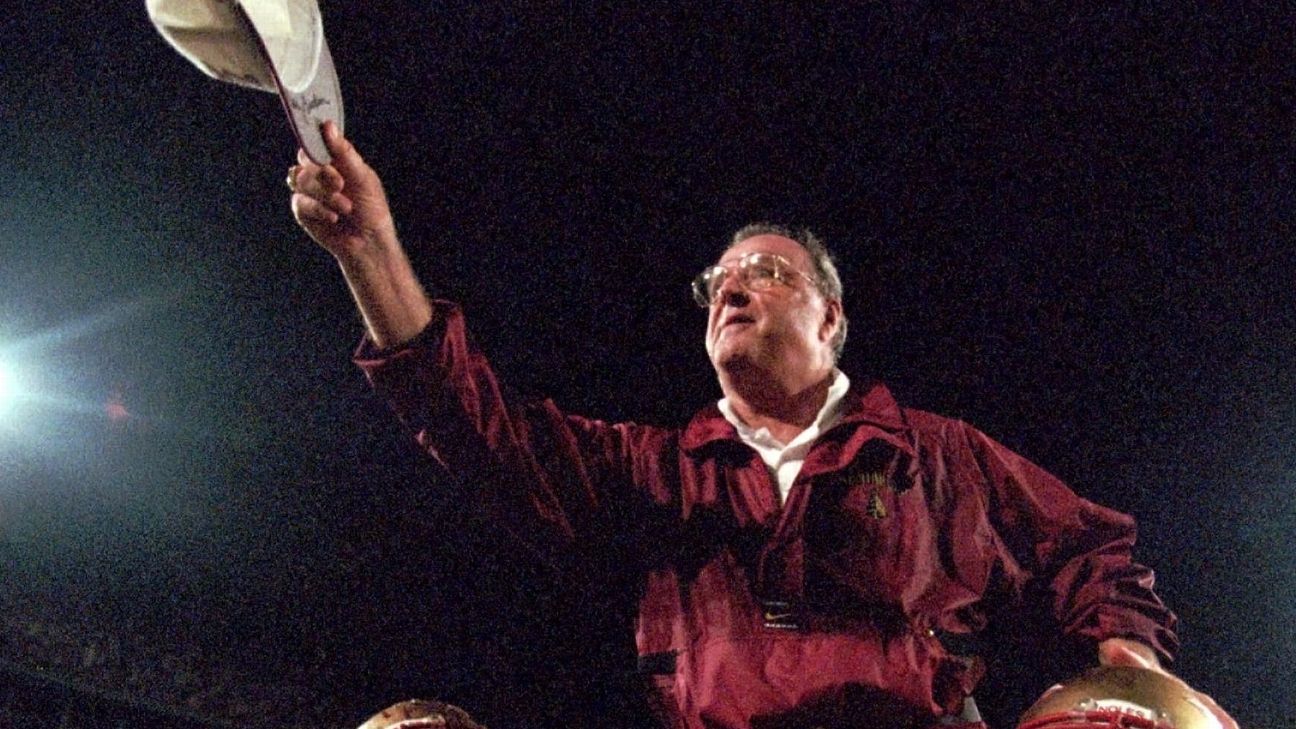 “My father passed away peacefully early this morning with all six of his children and my mother here by his side,” Bowden’s son Terry said in a statement. “I couldn’t have asked for a better personal mentor than my father. He was a wonderful husband and father, who relied on his strong Christian faith to provide the foundation for his life. I also was fortunate to be raised by a football coach who had a reputation for coaching the right way his entire career. He was admired by everyone who played for him or coached against him.”

Bobby Bowden was diagnosed with a terminal medical condition in July. He did not disclose what the condition was at the time, although Terry later told reporters that it was pancreatic cancer.

“I’ve always tried to serve God’s purpose for my life, on and off the field, and I am prepared for what is to come,” Bobby Bowden said in a statement announcing the condition. “My wife Ann and our family have been life’s greatest blessing. I am at peace.”

Bowden also dealt with what he called a “tough” bout of COVID-19 in 2020, which came a few days after returning to his Tallahassee home from a lengthy hospital stay for an infection in his leg.

“Florida State University has lost a legend in the passing of Bobby Bowden,” university president John Thrasher said in a statement. “On behalf of everyone at FSU, Jean and I extend our deepest condolences to Ann and the Bowden family. Coach Bowden built a football dynasty and raised the national profile of Florida State University, and he did it with class and a sense of humor. While he leaves an incredible legacy as one of the best football coaches in collegiate history, he also will be remembered for his great faith, his love of family and his mentorship of countless young people. He will be profoundly missed.”

A public funeral service will be held for Bowden on Saturday on Florida State’s campus. Public viewings will take place at FSU’s Doak Campbell Stadium on Friday and on the campus of Samford University, his alma mater, on Sunday.

Robert Cleckler Bowden, better known as Bobby, was born in Birmingham, Alabama, in 1929. He was a sickly child, diagnosed with rheumatic fever and spending a great deal of his youth in bed. It was then, listening to radio broadcasts, that Bowden developed a love of football. He listened to Alabama games on the radio — and while football didn’t cure Bowden, it certainly led to his life’s calling. With his health in check, Bowden played football at Woodlawn High School with dreams of going on to suit up for the Crimson Tide.

And that he did — at quarterback, no less — but love eventually took precedence.

Alabama’s policy at the time was that freshmen couldn’t get married, but Bowden really wanted to marry his high school sweetheart, Ann Estock. So he did, and he walked away from his Tide career as a result.

He went on to play quarterback for Howard College (now Samford University). He also played baseball and ran track.

After graduating, Bowden got his first coaching gig as an assistant at Howard. He parlayed that into another job, athletic director and head coach at two-year South Georgia College, which later led him back to Howard as head coach in 1959, where he’d coach until 1962.

His coaching prowess grew in that span, as did his wanderlust to coach larger schools.

His University Division (now called Football Bowl Subdivision) start was actually with the Seminoles, as wide receivers coach, from 1963 to ’65. He then went to West Virginia to serve as offensive coordinator from 1966 to ’69. He was named head coach in 1970 and had a 42-26 record with the Mountaineers.

The tragic Marshall plane crash in 1970 affected Bowden heavily in his first year as head coach. He petitioned the NCAA to wear Marshall jerseys and play their final game for them — but the NCAA said no. Instead, the players added green crosses and “MU” to their helmets.

He said later that Marshall wanted him to be its next head coach. But in 1976, Bowden went to Florida State, mostly because it was warmer in Tallahassee and closer to his mother. His first year as head coach of the Seminoles wasn’t his best — they went 5-6 — but it was his only losing record in his 34 seasons there. In 1977, the Seminoles got their first bowl invitation under Bowden, which would lead to 28 consecutive bowl appearances and national championships in 1993 and 1999. For 14 straight seasons, ending in 2000, the Seminoles won at least 10 games and finished ranked in the top five of the AP poll.

His status as a Florida State legend — and as a legend in college football as a whole — was established in that span. He and Penn State coach Joe Paterno were neck-and-neck at Nos. 1 and 2 on the winningest coaches list. In 2009, Bowden announced his retirement. The last years of his coaching career weren’t stellar.

“Nothing lasts forever, does it? But I’ve had some wonderful years here at Florida State, you know it,” Bowden said when announcing his retirement. “Hadn’t done as good lately as I wish I could have, but I’ve had wonderful years, no regrets.”

“Coach Bowden was one of the greatest coaches ever, but more than that he was an incredible man,” Norvell said in a statement. “He was a special human being who earned an enduring legacy because of his wonderful heart, faith and values he lived. It was the honor of my lifetime to know him and beyond anything I could dream to have a relationship with him.”

“We lost a great man in Coach Bowden today,” said Texas A&M coach Jimbo Fisher, who took over at FSU as Bowden’s successor in 2010. “One of the finest gentlemen and coaches to ever walk the sideline. … Just a tremendous human being with the lives he touched and the players he touched. That’s his legacy. The last time we talked, we talked about that. He lived a full life.”

“Probably [one of] the greatest ambassadors of all time,” Saban said. “He had success coaching but was also one of the greatest people and set an outstanding example for everyone in our profession. Your example of being a good person is something that can help us all professionally. He wasn’t always about him. He was always about helping other people. This is a very sad time for all of us, but Coach Bowden leaves a legacy a lot of us can continue to learn and grow from, and that will never be forgotten.”

Saban also shared a personal anecdote involving Bowden and spoke fondly of the former coach in a statement.

God bless the Bowden Family,Friends & Loved ones. My Prayers are with u. I’ve lost 1 of the best coaches I’ve ever had. pic.twitter.com/aNvkMJ704c

Today, we lost a legend. Bobby was a great friend and mentor to me, and his impact transcended the coaching profession in so many ways. Sending love to Ann and the entire Bowden family.

“Our hearts are heavy as we mourn the passing of Bobby Bowden,” ACC commissioner Jim Phillips said in a statement. “The ACC, Florida State and the entire college athletics family have lost a true giant. Coach Bowden was one of the most successful, humble and endearing individuals who was also one of the most decorated college football coaches in history.”

Bowden finished his career with a win at the 2009 Gator Bowl. A few weeks later, the NCAA stripped Florida State of 12 wins from 2006 and 2007 when FSU was found to have committed athletic fraud. He’s recognized as having 357 career wins, trailing only Paterno’s 409.

Bowden and his wife had six children, including two who became college football coaches, former Clemson coach Tommy Bowden and former Auburn coach Terry. A devout Christian, Bobby Bowden has a Fellowship of Christian Athletes award named for him. He is also the namesake of the Bobby Bowden National Collegiate Coach of the Year Award as part of a football club in Birmingham. The first award of its type went to Saban, with Bowden presenting the award himself.

Bowden was inducted into the College Football Hall of Fame in 2006.