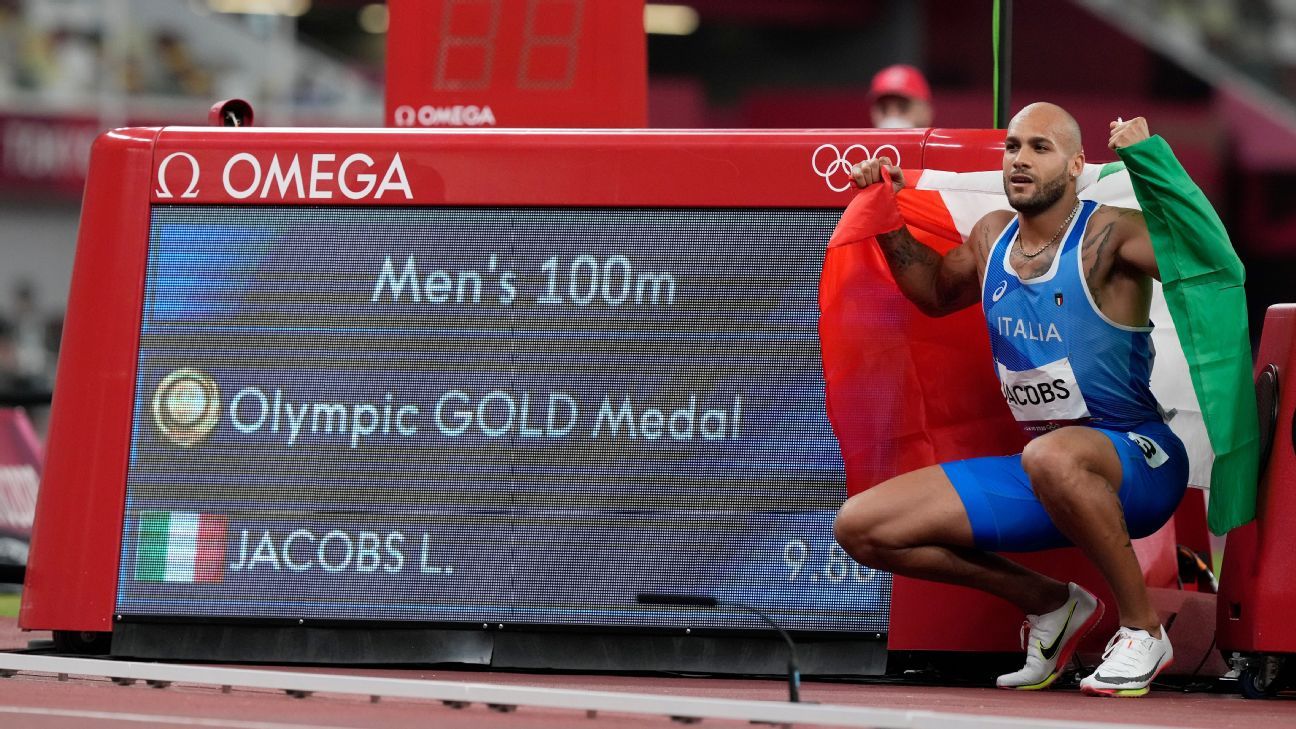 Day 9 in Tokyo marked the final visit to what has been a lucrative location for Team USA at these Olympic Games: the pool. There was also Xander Schauffele winning America’s first gold medal in golf in 121 years. Then, Day 10 got underway with men’s and women’s gymnastics event finals. Two American gymnasts found the podium, with newly minted all-around champion Sunisa Lee taking bronze in the uneven bars and MyKayla Skinner — who stepped in to compete when Simone Biles withdrew — earning a silver medal in the vault.

Then, a new fastest man alive was crowned as Italy’s Lamont Marcell Jacobs put on a show in the men’s 100-meter final — becoming not only the first Italian man to win gold in the event, but the first to medal in it.

But first, back to the pool, where Team USA had a spectacular last day. Caeleb Dressel started it by swimming an Olympic-record 21.07 seconds to take gold in the 50-meter freestyle. As soon as he took off from the diving board, there was no looking back for the sprint star.

The last race of the day was the men’s 4×100-meter medley relay — an event the U.S. has never lost. Swimming in Lane 1, Ryan Murphy started with the backstroke, followed by Michael Andrew in the breaststroke, Dressel in the butterfly and Zach Apple finishing the race strong in the freestyle.

Team USA’s quartet clocked a world-record time of 3:26:78 to win the gold.

Here’s what you might have missed from a jam-packed weekend of Olympic action:

Remember the name. Lamont Marcell Jacobs made history on Sunday as the first Italian man to medal in the men’s 100-meter final. But rather than settle for a spot on the podium, Marcell Jacobs went ahead and earned gold with a time of 9.80 seconds.

It was an American, Fred Kerley, who claimed the silver medal with a personal best of 9.84.

Kerley shocked many earlier this year when he announced that he would focus on the 100-meter and 200-meter sprints and away from the 400. For anyone who still has questions about the decision, his new hardware would like a word.

Spoiler: It is. Venezuela’s Yulimar Rojas didn’t just come to claim gold in the women’s triple jump, she came to smash the world record with an incredible jump of 15.67 meters.

In an Olympic Games full of meaningful moments, it’s hard not to feel like this one has to be in consideration for the most moving of them all. Italy’s Gianmarco Tamberi and Qatar’s Mutaz Essa Barshim decided to share the gold medal in the men’s high jump rather than competing in a jump off after both athletes cleared 2.37 meters.

Men’s high jumpers from Qatar and Italy just tied in the high jump and agreed to quit together and share the gold medal. They could have kept going. Never seen anything like that. Wow.

Schauffele finds gold on the greens

American Xander Schauffele has never won a golf major. Now, he’s one of two men’s golfers alive who can put a gold medal around his neck. Schauffele finished in the top 10 at all four majors in his young career, but finishing atop the leaderboard at the end of a major weekend has eluded him. Now he has the most precious of Olympic medals, five years after Justin Rose of Great Britain won it in 2016 at the Rio Games, where the sport returned to the Olympics for the first time in over 100 years.

“I kind of wanted this one more than any other one… a little speechless now in all honesty.”@XSchauffele on what it’s like to win Olympic gold for @TeamUSA and for his family. #TokyoOlympics pic.twitter.com/6RRekdjpvt

It’s #Golf gold for Xander Schauffele!#USA wins their first Olympic gold in an individual event in this sport since 1900!@igfgolf @TeamUSA pic.twitter.com/5bXvAQDabP

Schauffele, 27, carded a 4-under 67 in Sunday’s final round to finish 18 under par for the tournament.

Bobby Finke has another gear. After sprinting to the finish line in the 800-meter freestyle, Finke repeated the same in the 1,500 meters. He sprinted for his second individual Olympic gold medal, recording the second-fastest time in U.S. swimming history in 14:39:65. Ukraine’s Mykhailo Romanchuk finished second, and Germany’s Florian Wellbrock took third.

“It means the world to me. I was just trying to hold on and try to get the hand on the wall,” Finke said.

Carrying on a golden tradition

Gave her a shot and she took it.@GiveMe1Shot claims silver in shot put. #TokyoOlympics pic.twitter.com/GMDiztUOSF

Australia’s Emma McKeon continued to flourish in Tokyo, winning the women’s 50-meter freestyle with an Olympic-record swim of 23.81 seconds. It was her sixth Olympic medal in Tokyo, her third gold. Sweden’s Sarah Sjöström finished second, and Denmark’s Pernille Blume picked up bronze.

USA and Australia were neck and neck for most of the race. Australia finished with an Olympic-record 3:51:60. Canada picked up bronze. Australia’s McKeon, who was a part of the relay race, won her second gold of the night — and seventh Olympic medal overall in Tokyo.

McKeon is only the second woman to win seven medals at a single Olympics, tying a record set in 1952, and now has the most Olympic medals of any Australian Olympian.

The future is bright

Today’s aquatic events might have played a part in inspiring the next generation.

The sweep is complete

Team USA swept the top three positions to advance to the finals in two separate events — women’s hammer throw and the 3,000-meter steeplechase.

Pedal to the medal

“OMG THEY’RE PLAYING MY SONG.” – the horse at the club pic.twitter.com/xRNJ5N6acE

New Zealand claimed its first-ever gold medal in Olympic rugby sevens with a 26-12 victory over France in the final of the women’s competition at Tokyo Stadium.

Katie Ledecky bid farewell to the Olympic Village, but it’s not the end of the road for the 24-year-old swimmer. She plans to try to compete at the 2024 Paris Olympics “and maybe beyond as well.”

Thank you, Tokyo, and thank you all for the tremendous support this week and over the years! I could hear you all! 🥳

Bringing 2 Golds, 2 Silvers, and countless memories back to the USA❤️🇺🇸 pic.twitter.com/XpXx7oDELQ

With a broken neck!

WWE Hall of Famer Kurt Angle celebrated the 25th anniversary of winning a gold medal at the 1996 Summer Olympics.

On this day 25 years ago, I won the Olympic Gold in freestyle wrestling. #withabrokenfreakinneck 😆No better way to spend my 25 year anniversary than with my beautiful family……My wife and kids said I should buy a boat now. We shall see 😃#25yearsofgold #olympics #1996 pic.twitter.com/y89Ruk3ct8