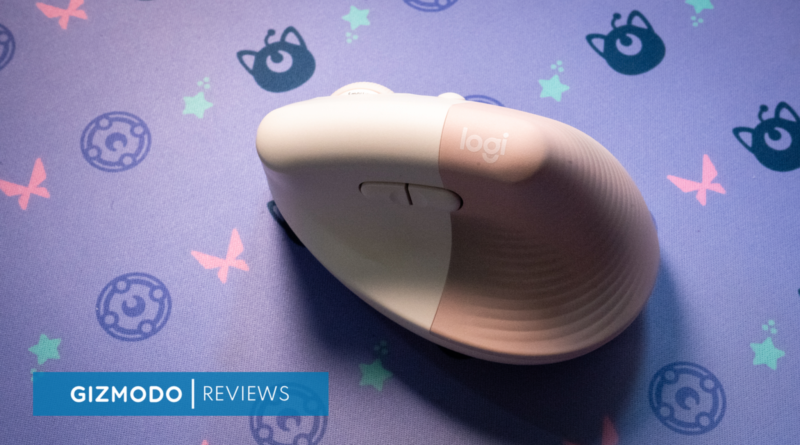 My wrists are killing me. It’s probably because I’m getting older, but I also have carpal tunnel from years of bad posture and ergonomics. Ever since I started working from home—way before this pandemic hit—I’ve been slouching, improperly propping-up keyboards and monitors, and wielding the wrong kind of mice. The Logitech Lift couldn’t have come at a better time.

This vertical mouse is the first time I’ve ever used one, but it feels like an apt entry point into the world of better ergonomics. Whereas I had a wrist-pain flare-up before calling in this mouse for review, things got exponentially better once I switched to the Lift from another Logitech mouse, the G305. The G305 is a solid wireless mouse, but I had to face the reality that aesthetics was not something I could continue to prioritize without increasing the toll on my body.

Fortunately, with the Lift’s cute colors and modern style, I don’t have to give up looks for ergonomics. After several weeks of use, I genuinely look forward to sitting down with the Logitech Lift to grind away at the day. Its handshake style grip just give my fingers so much more room to breathe. The only major bummer about this $70 vertical mouse is that it is not finger grease resistant. Now I’ve got to figure out a way to clean it.

How does the Logitech Lift look?

The Logitech Lift vertical mouse is a sibling of Logitech’s MX Vertical mouse, so it comes from solid stock. However, the Lift is smaller, making it more comfortable for smaller hands (Logitech has a size-finder for mice if you’re curious if this will fit your grip). It also comes in a spectrum of colors, including rose, which you see here, graphite, and pale gray. There’s a specific model for left-handers, too, though that one only comes in graphite.

The Logitech Lift has quiet left and right click buttons, which is not something I considered would be a selling point for this particular peripheral. But they are so soft when you press them, which is perfect for this mouse’s ergonomic nature. Other buttons include a clickable scroll wheel, which I use with my index finger to scan through pages, and a small button beneath that, which adjusts the DPI. Logitech also includes two thumb buttons pre-programmed as Forward and Back for browsing.

The mouse itself moves smoothly on most surfaces. I used the Lift on a fabric desk mat, which it seems tuned for, though you will have to go into the crevices on the bottom of the mouse with a toothpick to clean it. There’s already gunk collecting there from my weeks of use.

Speaking of gunk, since you are cradling this thing all day, get ready for a shadow of hand grease that will appear after weeks of use. Admittedly, I eat at my desk, which probably contributed to the build-up. I also cradle my face when I think, and I wear tinted moisturizer every day, so it seems inevitable. At the very least, I didn’t notice it was happening until I sat down to write this review. Now that I know it’s there, I want to figure out how to get it off.

Logitech has a helpful page on cleaning its peripherals, but I’m still struggling to get some traction on the grime. I checked with a gadget-reviewing friend of mine, and they also noticed a bit of a film on their respective review unit. Part of the issue is that half of the mouse is rubberized, so it’s like a bonding agent for skin grease and lotions. I didn’t see as much residue on the matte half of the mouse.

The grime on my Logitech Lift review unit is concentrated around the parts where you grip the hardest: the thumb and forefinger. Since this is a vertical mouse, that’s where you’ll find your movements are concentrated, rather than flicking your wrist left and right, the way you would with a standard mouse. Instead, it feels like you’re drawing a large picture with a handy tool.

It took me a while to adjust to the Logitech Lift. When I first laid my hands on it, I immediately regretted it, because it was such a different sensation than what I was used to. But after about a week, I started to feel more comfortable with the movements required to operate a mouse like this.

Using the Logitech Lift is like moving a pen on a WACOM tablet. It works best with small, subtle movements, and every little twist of the wrist will immediately translate on screen. Though I love the Logitech Lift for general browsing and work purposes, I still find myself a little limited when shuffling between cramped menu items or adjusting a slider in programs like Adobe Lightroom. I definitely wouldn’t use this mouse for gaming and would instead revert to one of the original offenders of my carpal tunnel, the wired Logitech G203.

I’ve reviewed several different Logitech peripherals in the past. Every time, I’m confused about which of the company’s many apps I should use to get things the way I like them. I currently have six Logitech-made apps installed on my Windows machine to control all my different devices. They include Logitech G Hub for their gaming peripherals, Logitech Capture for my webcams, and Logitech Options for adjusting other Logitech keyboards and mice I’ve tested. Now, I have to round it all out with the Logi Bolt driver and Logi Options+ for the Logitech Lift.

Anyway, the sheer amount of programs is all very confusing. I already had the Logi Bolt software installed when I reviewed the Logitech POP Keyboard, so I didn’t get the prompt to install Logi Options+, an app that will presumably replace Logitech Options sometime down the line.

I like the look of the Logi Options+ software itself, and the program make it easy to click on which parts of the mouse I want to customize. The DPI button between the left and right mouse click is not programmed by default, so pressing it won’t affect the cursor speed unless you head into Options+ and adjust it. You can change the cursor speed in increments of 100 DPI, though it lists it in percentage points. The maximum speed of the Lift is 4000 DPI. If you wanted to use it for gaming, you could.

A good, if grimy, mouse

Logitech promises up to 24 months of battery on one AA battery for the Lift. It’s been a month, and I’m still at 100% when connected via the Bolt USB receiver. The Lift does offer Bluetooth connectivity, and you can switch between three different computers or tablets at a time.

The Logitech Lift inspired me to move things around my office so I wasn’t aching by the end of the workday. I’ve since switched to a better keyboard and keycaps and swapped out the tiny desk for a larger standing one that adjusts by crane. Things are getting better, though there’s always room for improvement. And while the Logitech Lift hasn’t eliminated my pain, the physical act of moving my arm around the desk to control my computer means I’m taking the pressure off my battered wrist.

The Logitech Lift won’t appeal to everyone. Reading other reviews, larger hands seem to have a more challenging time adjusting to the Lift, its size, and where the buttons are relative to where the fingers land. But for me, it’s been a boon to my productivity and to the comfort in my work-from-home lifestyle. And it comes in a color that matches the rest of the stuff on my desk.