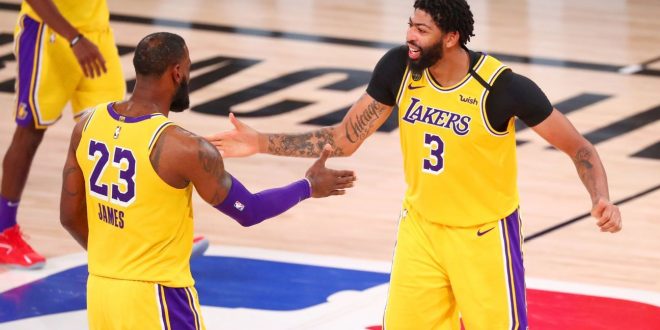 LAKE BUENA VISTA, Fla. — The Los Angeles Lakers might have missed out on convincing Kawhi Leonard to join LeBron James and Anthony Davis and form a “big three” last summer, but Lakers coach Frank Vogel says L.A.’s team defense is ending up having the same impact another All-NBA individual added to the mix would have had.

“That’s as powerful a weapon there is in one of these playoff runs. It’s as powerful as a superstar,” Vogel said after L.A. beat the Houston Rockets 110-100 on Thursday to go up 3-1 in their Western Conference semifinal series. “If you have an elite defense, that can be your third star, so to speak.”

Beyond holding Houston to 43.4% shooting as a team, L.A. limited James Harden to just 21 points on 2-for-11 shooting from the field. Even with Harden making 16 of 20 free throw attempts, he was kept well below his league-leading average of 34.3 points per game.

James, who just missed a triple-double with 16 points, 15 rebounds and 9 assists in Game 4, emphasized just how impressive a feat the Lakers’ defense is trying to pull off against Harden.

“So we’re just trying to eliminate anything that we can from him, because he can score from [anywhere]. He gets into the paint with his runners, with his floaters. Obviously, he’s got the step-back. He’s got the 3s in transition. He has his catch-and-shoot 3s when he’s off the ball. And like I said, he’s very tricky with his moves in the paint, where he gets to the free throw line. So we’re just trying to take away some things. We can’t take away everything, because that’s how great he is offensively. We try to follow the game plan and see what happens from there.”

L.A. trapped Harden 17 times in the pick-and-roll Thursday, which is more than twice the amount of times he has been trapped in a playoff game in the past six years, according to Second Spectrum data. The Lakers trapped the former MVP 13 times total in the first three games of the series.

“When you have the confidence you can go four, five, six possessions where you’re just squeezing the other team’s offense, getting stops and then with our ability to run the floor with LeBron James being the quarterback of that action and being in attack mode, we have strong belief in what we can accomplish as a group,” Vogel said.

Despite the defensive showing, Davis — who was the runner-up for Defensive Player of the Year this season to the Milwaukee Bucks‘ Giannis Antetokounmpo — was not satisfied with his performance on that end.

“I feel I was a step slow on defensive rotations tonight. I feel I can be better defensively,” said Davis, who led the Lakers with 29 points to go with 12 rebounds, 5 assists and 2 blocks. “Kind of got knocked off my rhythm early [in Game 4]. But for me to just keep going, I go in and try to get offensive rebounds, screen for my teammates, do all the intangibles and make sure I can affect the game in other ways besides just scoring the basketball.”

L.A. will have a chance to close out the Rockets in Game 5 on Saturday and advance to the Western Conference finals for the first time since 2010.

“We’re happy with what we were doing on the defensive end,” Vogel said. “It can always get better. Obviously, the fouls [can be cut down]. Plan A with guarding James Harden is don’t put him on the free throw line and we gave him 20 free throw attempts. So, we got to make sure we’re doing a better job there, but overall, we’re just trying to limit him and make him as uncomfortable as we can.

“He’s seen every coverage there is in the world and he knows how to attack it. Like I said all along with this group and with him: We’re not going to be comfortable because we know what he’s capable of. So, we just got to continue to watch film, get better, strengthen the plan each game that we play and hopefully get better in Game 5.”