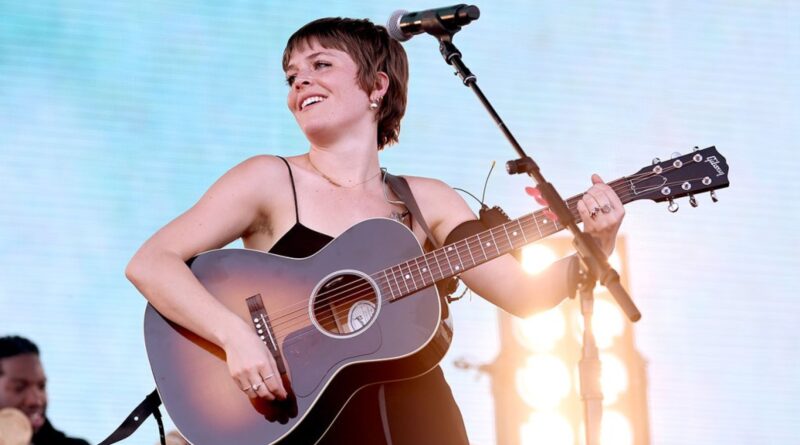 “Surrender” spans a dozen tracks including the lead single “That’s Where I Am,” which led Billboard’s Alternative Airplay chart last month.

Maggie Rogers performs on the Coachella stage during the 2022 Coachella Valley Music And Arts Festival on April 24, 2022 in Indio, Calif.

Three-and-a-half years have passed since Maggie Rogers entered the big league with Heard It in a Past Life, an album that peaked at No. 2 on the Billboard 200 chart and earned the singer/songwriter/producer a Grammy nomination for best new artist.

The Maryland native returns with Surrender, a set spanning a dozen tracks including the lead single “That’s Where I Am,” which led Billboard’s Alternative Airplay chart last month and appeared on former POTUS Barack Obama’s 2022 Summer Playlist, and “Want Want,” which she recently performed live on The Tonight Show Starring Jimmy Fallon.

Surrender is co-produced by Rogers and Kid Harpoon and was recorded in three locations — her folks’ garage in Maine; New York’s Electric Lady Studios; and Peter Gabriel’s Real World Studios in the south west of England.

Many of the events that the LP chronicles take place in NYC, she explained in a statement last month. “The proximity and pleasure of just staring at strangers. The way a night could unfold. Events that interrupt your day instead of having to consciously and deliberately make each decision,” she continued. “I longed for someone to sweat on me. Spill their beer on my shoes. Be too tall for me to see at the concert. The city’s music and attitude was a big source of inspiration for the record.”

Rogers is booked to perform at iHeartRadio Music Festival, Sept. 24 in Las Vegas, with U.K. and Europe tour dates in support of Surrender kicking off Oct. 31 at the O2 Academy in Leeds, England.