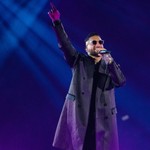 Maluma Serenades L.A. Fans During Papi Juancho Tour Stop: ‘I Give You My Heart’

Working the in-the-round or 360-style stage, which allowed for more interaction with fans from every corner, Maluma went on to perform other chart-topping tracks such as “Corazón,” “Borró Cassette,” “Felices Los 4” and “Chantaje.”

Here are five takeaways from Maluma’s sold-out show at The Forum from his Papi Juancho Tour.

Before Maluma took center stage, a pounding heart was projected onto a white rectangular canvas that was erected in the middle of the stage as a narrator told the story of Juan Luis (Maluma’s real name) and his journey that’s been filled with emotion, passion, joy and music: “He’s always been Juan Luis and has given you his heart. Now, it’s time to give him yours.” Then it was Maluma’s turn to speak: “My heart has been waiting for this moment. Today, I give you mi corazón.”

Mid-concert, Maluma — by this point he had ditched the long black coat and opted for black slacks and a fitted black sleeveless T-shirt to show off his bulky arms — reflected on tough moments during the pandemic, asking fans to enjoy their loved ones while they’re still alive. “I have everything right now. I feel so blessed. But there were many lessons learned during this difficult time,” he said. “During the pandemic, many things happened and one of those things was this song that is so special. Without a doubt, it’s my favorite song from my Papi Juancho album. I want to sing it for all of you tonight.” With just a piano in tow, he serenaded fans with “AMDV,” the ballad that peaked at No. 14 on Billboard’s Hot Latin Songs chart (dated July 10, 2020).

In an ode to his #7DJ (7 Days in Jamaica) EP, Maluma performed all seven tracks from the set while smoking hookah and surrounded by his troupe of dancers, who wore neon orange leotards. Following the exact order from his EP, the medley kicked off with “Tonika” and ended with “Peligrosa.”

Maluma may have kicked off the concert with some of his newer material — such as “Hawái,” “Parce” and “Madrid,” all off his 2020 Papi Juancho album — but fans also got to sing along to some of his slightly older anthems, such as “Felices Los 4,” “Vente Pa’Ca,” “Chantaje” and “Cuatro Babys.”

Before entering The Forum, you had to show proof of vaccination or a negative COVID-19 test. Once inside, staff and/or security walked around the venue with a sign that read “mask must be worn.” If you weren’t wearing a mask, they would promptly ask you to put it back on. In Los Angeles County, everyone, regardless of vaccination status, must wear a mask in all indoor public settings, including venues.