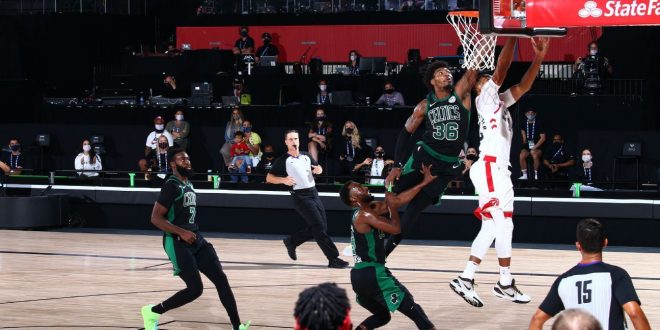 LAKE BUENA VISTA, Fla. — In Game 6 of the Eastern Conference semifinals series between the Toronto Raptors and Boston Celtics, Raptors guard Norman Powell had the ball on a fast break against Celtics guard Marcus Smart with less than a minute to go in double overtime and converted an and-1 layup that helped seal a dramatic Toronto victory to keep the series alive.

With less than a minute to go in Game 7 on Friday night, the same scenario presented itself. This time, however, Smart made sure there would be a different result.

“In my mind I was just telling myself, ‘He has to dunk it. I’m not gonna give no foul. I’m just gonna meet him up top and see who wins that battle.'”

It turned out that Smart’s defense, as it often does, won out this time. And, as a result, the Celtics won 92-87 and advanced to the Eastern Conference finals.

Smart’s block on Powell with 58.2 seconds left — a play reminiscent of the chasedown block by LeBron James against Andre Iguodala in Game 7 of the 2016 NBA Finals — prevented Toronto from its best chance of tying the score in the final moments, as the Celtics advanced to the conference finals for a third time in four years.

After the Raptors survived close calls in Games 3 and 6, Smart’s block proved to be the moment that finally caused the defending champions to be sent home from the NBA’s bubble at the Walt Disney World Resort.

“I bet on myself 110% of the time,” Smart said. “I’m first-team all-defense for a reason, and I believe in that wholeheartedly.”

Smart often trails in attention behind his higher-profile teammates in Boston, and that remained the case in Game 7. Jayson Tatum (29 points, 12 rebounds and 7 assists) became the second-youngest player in NBA history to have at least 25 points, 10 rebounds and 5 assists in a Game 7 — trailing only his idol, Kobe Bryant. Jaylen Brown had 21 points, and Kemba Walker struggled overall but made a couple of key plays in the fourth, including the clinching free throws with 7.9 seconds left.

But ask anyone around the Celtics, and they will be quick to say that it is Smart — with his toughness, his defense and his nonstop hustle — who is the heart and soul of this team. And it was fitting that his play was the one that helped seal Boston’s win, both in this game and this series.

“That block was so special,” Walker said. “It was unreal. That’s why he’s first-team all-defense. He shows it night in and night out. He made so many huge plays tonight. A lot of the things he does just go unnoticed.

“But that kid, he’s special, man. He’s on a different level at that end of the basketball court.”

Smart played a huge role in the struggles of Raptors star Pascal Siakam in the series. He made multiple stops on Powell in the fourth quarter before his highlight block. And, if it wasn’t for Toronto’s late comeback in Game 6, Smart’s first playoff triple-double in that game would’ve been the thing that carried Boston into the East finals against the Miami Heat a game sooner.

Still, the Celtics will simply be glad to be getting there at all, after surviving this slugfest of a series against the Raptors, who gave Boston absolutely everything it could handle despite being outplayed for the vast majority of the series by the team’s own admission.

“Of course,” Celtics coach Brad Stevens said, when asked if Boston had gotten better as a result of playing this series against Toronto. “I mean, I’ve coached in a lot of playoff games now, a lot of playoff series and a lot of NCAA tournament games. I’d say we saw more defenses and more stuff and more … right when something worked, the next play it didn’t work anymore. That’s a credit to them.

The Celtics should be a different team against the Heat, as well. Injured forward Gordon Hayward, who has been out since the first game of Boston’s first-round series against the Philadelphia 76ers after suffering a Grade 3 right ankle sprain, is now out of quarantine after returning home for the birth of his fourth child and was working out on the court before the game.

Stevens said he expected Hayward to return at some point against Miami but doesn’t know when. Monday will mark four weeks since Hayward’s injury — which was the original time frame for his return. Boston’s series against Miami begins Tuesday night.

The Celtics will be playing in it, in large part, because of Smart’s play down the stretch Friday night.

“I said this before the playoffs, we’ve got a chance to play in [the playoffs] every year he’s been here, and it’s not a coincidence.”