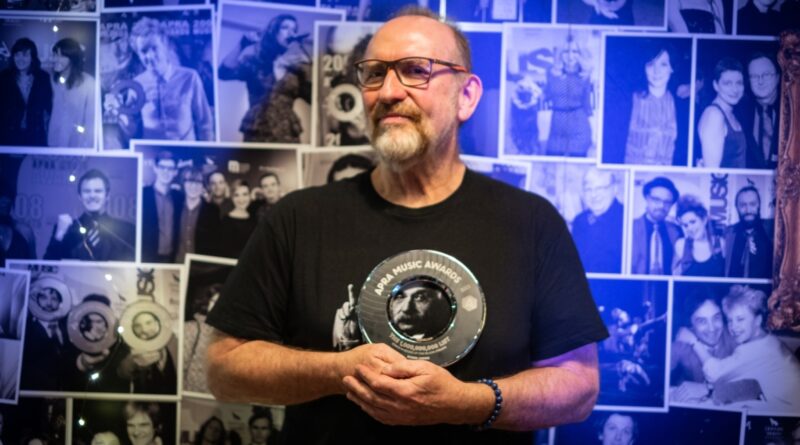 The 40-year journey of “Down Under” is as remarkable as the travel tales told in its lyrics.

Australia’s unofficial anthem, Men At Work’s “Down Under,” is feted with APRA AMCOS’ Billions Award, in recognition for surpassing one billion streams across all platforms.

The award takes into account streaming numbers from all major services including Spotify, Apple Music, YouTube, YouTube Music, Vevo and Amazon, and is said to be the first of its kind to celebrate a songwriter’s streaming achievement.

Frontman and co-songwriter Colin Hay was on hand at the PRO’s offices to receive the accolade.

“I think that more than anything, the way that the song felt was that I had this deep love for this country, but not in a flag waving way, in a very deep spiritual way,” says Scotland-born Hay, who is currently on tour in these parts.

“I didn’t quite understand what it was, but I can still feel it, I can’t often put it into words—I love the place so much. That’s what the song is, it’s about love and celebration in a very true way.”

The 40-year journey for “Down Under” is as remarkable as the travel tales told in its lyrics.

Written by Hay and Men At Work guitarist Ron Strykert, “Down Under” was the second official single from the band’s debut album Business as Usual, released in 1981.

Some two years after its release, both album and single simultaneously went to No. 1 in the U.S., and in the U.K., a rare achievement for a act from Australia, then and now.

The single reigned for four weeks on the Billboard Hot 100, and has sold two million copies in the U.S., according to APRA AMCOS.

“Down Under” also topped charts in Australia (in 1981), and New Zealand, Canada, Ireland, Denmark, Switzerland and Italy (all 1982), and Men At Work went on to win best new artist at the Grammy Awards.

Later, the song the subject of a bruising — and costly — copyright battle, which began in 2009 and concluded several years on.

With that legal saga in the rearview, “Down Under” has reached new audiences through a drum ‘n’ bass reworking by DJ Luude, which peaked at No. 5 in the U.K. earlier in the year, and it soundtracks the new Tourism Australia campaign, with a re-imagined cut by north-east Arnhem Land band King Stingray, singing in Yolngu Matha and English.

Hay received the distinguished services award for outstanding contribution to Australian music at the Global APRA Music Awards, held in 2020 in Los Angeles. On that occasion, he was presented with the trophy by pop superstar Sia, who remarked of her “Uncle Collie,” “You’re my favorite singer.”