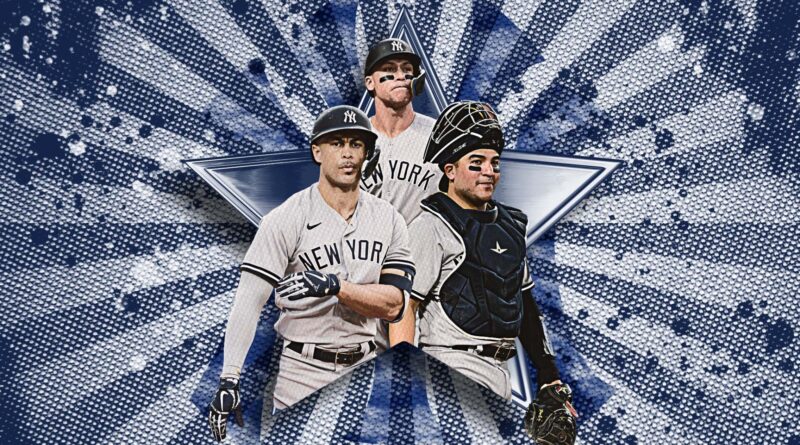 The record for most representatives from one team at an MLB All-Star Game belongs to … the Yankees, of course!

In 1939, when they also had the best record at the break, the Yankees had 10 (!) players in the All-Star Game, which took place, fittingly, at the original Yankee Stadium. Those 10 included six of the starters for the American League: starting pitcher Red Ruffing, catcher Bill Dickey, second baseman Joe Gordon, third baseman Red Rolfe, left fielder George Selkirk and superstar center fielder Joe DiMaggio. Shortstop Frankie Cosetti, Hall of Fame pitcher Lefty Gomez and right-hander Johnny Murphy were named to the team as well.

The 10th player was Lou Gehrig, who had given his iconic “Luckiest Man On Earth” speech just a week earlier, following his untimely retirement, and was there as an honorary captain. Even if you don’t count Gehrig, nine representatives is still a stunning amount. And it turned out to be a wholly appropriate level of representation: The Yankees finished the season with the best record in baseball and swept the Reds to win their fourth consecutive World Series championship.

Let’s get this out of the way now: The 2022 Yankees are not going to have 10 All-Stars. They almost certainly won’t have nine. But how many could they have? How many All-Stars does the team with the best record at the break typically have?

I’m so glad you asked! Here are the answers over the past decade:

Recent history suggests that four to six All-Stars is what you’d expect for the team with the best record at the break, with the seven Cubs reps in 2016 the high-water mark — and, as with the 1939 Yankees, solid evidence that the team was in the middle of a pretty special season.

Could the 2022 Yankees have seven All-Stars? It’s definitely possible. Let’s take a look at the candidates, in order of likelihood to make the trip to Los Angeles in a couple of weeks.

No need to belabor this one. He has already been named a starting outfielder for the American League, and he’s the obvious front-runner for AL MVP. Judge is absolutely sensational. We’ll see him in L.A.

One of the biggest breakout pitchers across the league, Holmes has completely overtaken the closer job from Aroldis Chapman and hasn’t looked back. He recently had a run of 29 straight scoreless appearances, which had bullpen teammate Michael King in complete awe.

“I never want [manager Aaron] Boone to pull me from a game. But when I’m in my third inning of relief, and Boone comes walking out, and I look to the bullpen, and it’s Clay, I’m like, ‘Please, take it, my runs will not be cashed in.’”

Holmes should be a no-brainer choice as one of the few relievers to represent the AL in Los Angeles.

Fun fact: Stanton hasn’t made the All-Star team since 2017 … when he was on the Marlins and won NL MVP. Think about that!

This season, Stanton has a great chance of returning and is still in the running for one of the starting AL outfield spots via the fan vote. Even if he doesn’t get the starting nod, he has an excellent All-Star case and still clearly possesses the most raw power in the sport.

What a season it has been for the 27-year-old lefty, who burst onto the scene as one of the more reliable starting pitchers in baseball and is doing that differently than almost any other frontline ace in the game.

Cortes deserves to be named an All-Star.

You could say Cole’s season has been somewhat underwhelming, but that’s just because of how high he has set the standard for himself. His 117 strikeouts are tied for fourth-most in MLB, and his ERA is under 3.00 again. It’s not supersonic 2019 Gerrit Cole, but he still looks like an All-Star to me.

Trevino has been an incredible addition to the Yankees’ roster, most notably for his defense, which has clearly had a significant impact on a pitching staff that currently leads MLB in both fWAR and ERA.

“We have, I think, the two best defensive catchers in the league,” Cortes said of Trevino and Kyle Higashioka. “That helps us as pitchers be more confident, whether it’s pitch-calling or throwing a ball in the dirt that you know they’re gonna snag or even throwing guys out. Trevy has done a bunch of backdoor picks and getting guys at second.”

But don’t sleep on Trevino’s bat, either. He has been an above-average hitter — and not just for a catcher. He’s a finalist for the starting AL catcher spot but looks likely to fall short to Toronto’s Alejandro Kirk, which means he’ll need to beat out the likes of Salvador Perez and Jonah Heim to get the invite to L.A.

Rizzo got off to a scorching start in 2022, launching nine dingers in April and making his return to the Bronx in the offseason look like a brilliant move. He has been an important part of the Yankees’ lineup, but as far as his All-Star case, homers are the main argument. Guys such as Ty France (156 wRC+) and Jose Abreu (144 wRC+) have much stronger cases for AL first baseman, as they’re more well-rounded hitters than Rizzo (139 wRC+).

That said, homers are still a great argument, and simple counting stats are often a good way to get invited to the All-Star Game.

While he hasn’t been racking up saves, King has been one of the most valuable relievers in the league, thanks to his ability to go multiple innings.

“He’s been our bread and butter this year,” Cortes told FOX Sports. “[Holmes] has been lights-out, but he’s a closer, so he has a better shot. It doesn’t go unnoticed what [King] has been doing because he’s the guy that puts out the fire every time, and that’s very valuable to a team.”

Jameson Taillon and Jordan Montgomery have been very good, but Severino has been quietly excellent in his first full season following Tommy John surgery in February 2020. His 28.9% strikeout rate ranks eighth among starting pitchers with at least 70 innings pitched, and his stuff appears to be essentially all the way back.

Severino is a bit behind innings-wise, compared to some other starting pitcher candidates in the AL, but when on the mound, he has certainly looked like the All-Star he was in 2017 and ’18.

Torres has transitioned smoothly into the every-day second-base job, providing much more reliable defense than he ever did at shortstop and hitting the ball harder than he ever has before — yeah, even harder than when he hit 38 homers in 2019.

He’s still flying under the radar somewhat, but he has a sneaky-strong case behind Jose Altuve and Luis Arraez among AL second basemen.

Like Torres, LeMahieu has bounced back from a disappointing 2021 season. It seems reasonable to conclude that LeMahieu’s stunningly lackluster 2021 had a lot to do with the sports hernia he was playing through the entire season, and it has been nice to see him bounce back this year. It hasn’t been anything flashy, but he’s playing quality defense at three infield spots, and his offensive production is back to solidly above league average (122 OPS+).

This is the version of LeMahieu I thought the Yankees were getting when they signed him before the 2019 season — not the MVP candidate he appeared to be in 2019 and ’20 — and in this lineup, that’s perfectly sufficient. That said, I’d be surprised to see him named an All-Star reserve, considering his underwhelming counting stats.

So there you have it: There are 11 Yankees All-Star candidates.

Will they all make the trip to L.A.? Of course not. My best guess right now is six All-Stars from the Bronx.

Judge, Holmes, Cortes, Stanton and Cole seem like locks, and I’ll bet one of the others ends up making it as a reserve or injury replacement.