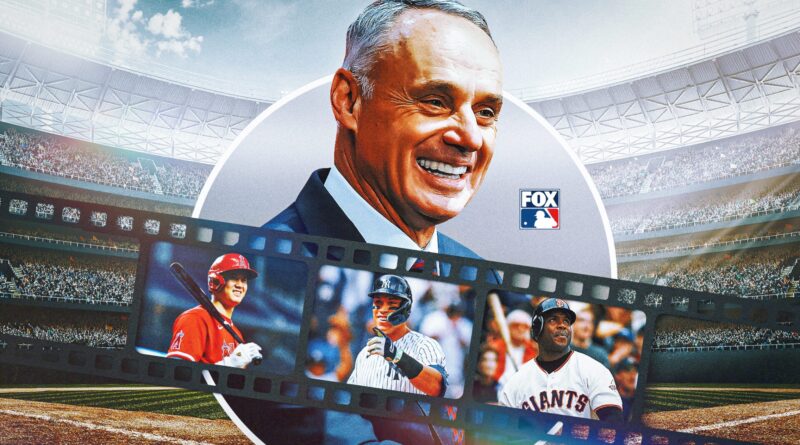 Debates have raged among fans about where Aaron Judge’s season stands in Major League Baseball history after the New York Yankees star crushed his 62nd home run of the year Oct. 4.

“One of the big conversations this year was about the Aaron Judge pursuit of [Roger] Maris’ [home run] record, which … was great for the sport,” Craig Carton, host of “The Carton Show,” said Monday. “But then there became what I think is a ridiculous argument and that is: What’s the home run record? Is it [Barry] Bonds’ 73 … or [is] it Aaron Judge’s 62?”

MLB Commissioner Rob Manfred joined the show to discuss the debate and share the commissioners’ office’s stance on the single-season home run record.

“We have always taken the position that the record book says what it says,” Manfred said. “You can’t change what happened. You can’t undo what happened. I think with respect to numbers, you know, there’s a long history in baseball. Different things happened in different eras. The ball was different, the height of the mound was different, and fans make their own judgments.

“I think what you saw with Aaron Judge is [that] it was an absolutely monumental performance, and fans reacted to it that way. I think that’s kind of the end of the story from our [point-of-view].”

The discussion stems from critics of Bonds’ record, those say it shouldn’t count or hold as much weight because of Bonds’ links to performance-enhancing drugs. Nonetheless, Bonds is the all-time MLB single-season home run record holder with 73, set in 2001.

Judge this season surpassed Maris for the most home run in a season by an American League player, a mark that previous stood for 61 years.

Manfred also touched on a few other hot topics in baseball, including Shohei Ohtani’s second consecutive jaw-dropping season and if the MLB will use technology to aid umpires in the future.

“[Ohtani] is a transcendent talent,” Manfred said. “There [has] just been no one like [him] certainly in either of our lifetimes. … We’re really focused on the internationalization of the game, and to have a player from outside North America who is as great — maybe the best player in the game — is really important to those efforts.

“I can’t overstate his significance.”

As for automation in calling balls and strikes, Manfred said it might be coming our way in the near future.

“I think that you’re gonna see the automated system in one form or another,” he said. “We’re using two forms in the minor-leagues. One where every pitch is called by the machine, and the second one is a challenge system. It takes about four seconds for the challenge.

“There’s a good chance we’re gonna be using it [at] the big-league level at some point.”