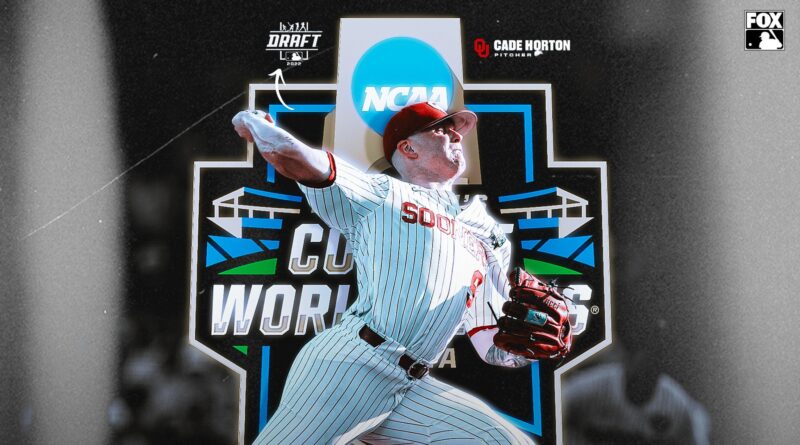 Somebody made $1 million Sunday night at the College World Series.

Three years ago, that would have been impossible. But Cade Horton, a draft-eligible, 20-year-old, right-handed pitcher for the University of Oklahoma, threw six magnificent innings against Notre Dame on Sunday in the CWS, striking out 11 while walking just one in the Sooners’ 6-2 win.

The only blemish was a hanging curveball in the sixth that Irish catcher David LaManna dispatched into the left-field bullpen. Horton bounced back immediately, striking out the next two batters on a pair of devastatingly good sliders.

Horton’s fastball kept Notre Dame’s lineup uncomfortable all evening but was particularly electric in the early going, sitting in the 94-96 range with a few 97s and a 98 mixed in. Even though the velocity tailed off as the night wore on, Horton continued missing bats because his slider, a sharp, two-plane monster with tons of depth, was downright untouchable.

In the postgame media conference, Horton revealed that he learned the grip for that slider only five weeks ago. Now, it will almost certainly make him a millionaire.

For decades, the MLB Draft was held in early June, typically during super-regional weekend, the last round of college baseball playoffs before the CWS. This created a bizarre evaluation window for teams, as regional games the week before the draft became final exams of sorts for top prospects, with amateur scouts and cross-checkers flocking to college ball yards across the country to get one last look at players of interest.

That timeline also made the College World Series irrelevant from a scouting perspective. Teams saw little value in shipping scouts to Omaha to watch players who either (1) were just drafted a week before and hadn’t yet signed or (2) wouldn’t be draftable for at least another 358 days. So even as the Nebraska baseball jamboree blossomed into the jewel event it is today, with college baseball’s best clubs and players battling it out on national TV under the sport’s brightest lights, it remained an afterthought for much of the scouting community.

Last year, Major League Baseball moved the draft back about a month, to the weekend before the All-Star Game in mid-July. The early feedback on the new date has been mixed — folks inside the game noted that the month of downtime between the end of the CWS and the draft did little but muddy the evaluation waters and make the second half of July, with the trade deadline at month’s end, obscenely hectic — but there are a few positives as well.

Even though the MLB Draft will never rival the hype of its NBA or NFL counterparts, the new date allows it to shine a bit more and hopefully grow as an event. Also, teams are able to get a more complete evaluation of players, particularly as far as character, work ethic and makeup, as the extra month enables more one-on-one interaction with potential picks.

As for the college players, they don’t need to worry about the draft during the postseason, as they did in the past, with players sometimes informed about being chosen while in the on-deck circle of a super regional.

Most of all, moving the draft turned the College World Series into a key scouting opportunity, something it hadn’t been for decades. Although this year’s eight Omaha teams are a relatively underwhelming group in terms of potential first-round selections (Horton, his teammate Peyton Graham and Stanford’s Brock Jones are the big dudes), the event has skyrocketed in terms of its relevance for MLB organizations.

About 15 or 20 scouts were behind home plate for Horton’s performance Sunday. One team had three evaluators in the house. That’s a huge uptick from just a few years ago. One scout mentioned that he has been covering the event for six or seven years, and in the past, he’d often be the only team official in attendance. That’s very much no longer the case.

In this case, Horton’s story only heightened the appointment viewing of his first Omaha start. A top quarterback prospect coming out of high school, Horton committed to OU to play football and baseball but dropped his gridiron dreams upon arriving on campus. In the fall of his freshman year, he got rave reviews from Sooner skipper Skip Johnson as a two-way dynamo, but then he tore his UCL in January 2021, missed all of last season and was limited to playing the field early this season while recovering from Tommy John surgery.

After spending the first few months of this season manning third base, Horton returned to the rotation full-time in early May, though he needed a few starts to shake off the rust before hitting his stride. But in his past four starts since an eight-run stinker against Texas Tech on May 21, Horton has allowed just nine runs in 23.2 innings, with 36 strikeouts and six walks.

That sudden ascension meant many teams hadn’t had the opportunity to see the new and improved Cade Horton in person.

And when you consider that a rash of arm injuries to a number of the top college hurlers has made this draft shallow on college pitching, Horton becomes an even more alluring proposition for teams picking in the middle to back of the first round.

At one point Sunday, in the scout seats behind home plate, an evaluator whose team picks in the top half of the round turned to a scout from another team and asked where they’d be picking. Scout No. 2 replied with a number higher than 15.

Scout No. 1 chuckled, shook his head and replied: “Quit wasting your ink. Put your pen down, and go home. This kid won’t be around for you.”

Most evaluators agree: Horton has rocketed up draft boards over the past month and could very well go in the middle of the first round, as one of the first college pitchers taken. His combination of athleticism, stuff and the fact that he has never focused on pitching full-time is quite the package. If OU beats the winner of Notre Dame/Texas A&M on Wednesday and advances to the championship series, Horton would likely make one final start Saturday. If he shoves again, his stock will keep going up.

It’s a supersonic rise for a player who was a huge question just a few months ago. Horton has gone from a talented yet unproven pitcher likely to return to Oklahoma for his junior year to a slam-dunk first-day pick.

His start Sunday was the exclamation point, the proof of concept, the money-maker, the apex of his ascent. Because of the draft’s later date, Horton had the opportunity to show his talent on the biggest stage, under the brightest lights, in as high-pressure a situation as there is. He took that opportunity by the horns and likely made himself a nice chunk of change in the process.