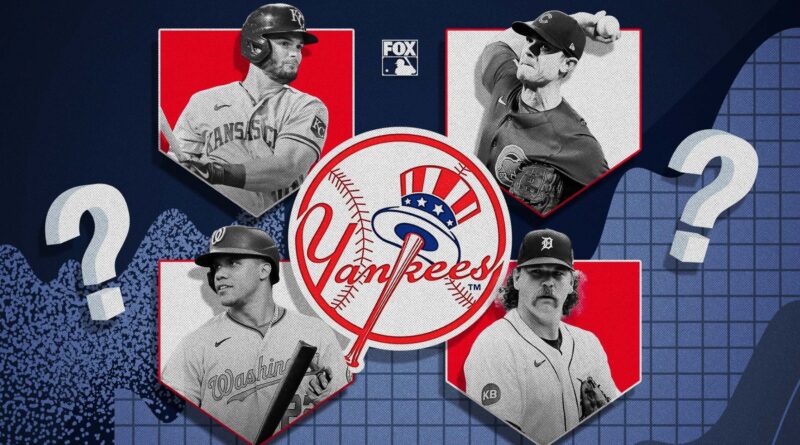 No longer on a record-shattering pace, the Yankees are now simply the best team in baseball.

However, the gap between them and Houston (two games heading into Tuesday night) is smaller than it has been in months, with the Yanks just 5-5 in their past 10 games.

There’s no reason for panic; all great albums have a bad song or two. Barring a complete and total collapse, the Yankees should sleepwalk their way to an AL East crown as either the No. 1 or No. 2 seed in the newly-structured MLB postseason.

But that doesn’t mean GM Brian Cashman & Co. aren’t looking for reinforcements to soup up the roster at the upcoming trade deadline.

Last deadline, the Yankees swung a big deal with Texas for Joey Gallo (let’s be kind and say “mixed results”), but their biggest acquisition ended up being a no-name reliever they got from the Pirates. Well, now Clay Holmes is the best reliever in the world. While it’s foolish to think Cashman can unearth yet another elite reliever from the deadline bargain bin, Holmes is a great reminder that valuable players can come from anywhere.

So with the Aug. 2 cutoff rapidly approaching, let’s take a look at where the Yankees stand and where they could stand to improve.

Juan Soto has options: Yankees, Mets & Padres in the mix

Ben Verlander looks at everything you need to know about Juan Soto’s possible trade destinations.

The current situation: At full strength, the Yanks have been operating all season with 10 players for nine spots. That’s a nice luxury, especially considering how much Gallo has struggled. The infield seems pretty set with Anthony Rizzo, Gleyber Torres, Isiah Kiner-Falefa, Josh Donaldson and DJ LeMahieu, but with Giancarlo Stanton headed to the injured list with Achilles tendonitis, there’s room for another outfield bat to give the roster an injury buffer.

The depth: Tim Locastro and Marwin Gonzalez are the other outfielders on the current roster. Locastro is more of a defensive replacement, pinch-runner type, and he just got recalled when Stanton went to the IL.

In Triple-A, there’s the indestructible Miguel Andújar, who had his trade request declined (or ignored, depending on how you want to label things), the unreliable Estevan Florial, whom the Yankees don’t seem to trust, and the eternal Tyler Wade, who somehow ended up back on the roster this year after spending the first three months with the Angels.

The options: There’s the Juan Soto conversation, and then there’s everything else. Making a play for Soto is less about filling roster holes or solidifying depth and more about acquiring the best young hitter in the world.

Beyond that, Kansas City All-Star Andrew Benintendi would add another solid lefty stick. Michael A. Taylor is another Royals outfielder having a nice season. Longtime Arizona outfielder David Peralta is also a lefty bat due to hit free agency after the year.

FOX Sports’ Ben Verlander tells us who he believes are the five teams most likely to trade for Juan Soto.

The current situation: Through games Monday, the Yankees’ starters boasted the third-lowest rotation ERA in baseball, at 3.26. The five main hurlers — Gerrit Cole, Jordan Montgomery, Nestor Cortes, Jameson Taillon and Luis Severino — have been impressively healthy all season; New York is the only team in MLB that has five pitchers with more than 16 starts.

While Severino’s recent IL stint with a minor lat strain doesn’t look like a lasting issue, it wouldn’t hurt the Yankees to add a reliable, boring, back-end, veteran starter who could also operate in long relief in case more injuries start to pile up.

The depth: Domingo Germán returned from the IL last week with an “avert-your-eyes” level horrendous start. He’s not a reliable option after years missed due to injury and a domestic violence suspension.

JP Sears remains the team’s best fill-in option, something the 26-year-old has done well twice already this year. Beyond that, it’s thin, with top prospect and recent Futures Gamer Ken Waldichuk likely the next man up.

The options: It’s tough to imagine the Yankees operating at the top of the deadline’s starting pitcher market — that’s just not a priority. So let’s cross Luis Castillo, Tyler Mahle and Frankie Montas off the list. That leaves the second tier of pending free-agent, veteran inning-eaters.

I know every Yanks fan from Trenton to Montauk shudders at the names “J.A. Happ” and “Andrew Heany,” but those are exactly the types of consistent, uninspiring bulk arms the Yanks could use. Fortunately or unfortunately, Happ retired in May, so he isn’t available unless he pulls a Brett Favre.

The other, unretired names in this group?

Even though he has tailed off a bit recently, Pittsburgh lefty José Quintana is having a nice bounce-back season (3.70 ERA in 19 starts), and we know the Pirates and Yanks trade all the time. New York already has a ton of lefties, though (Cortes, Montgomery, Sears, Lucas Luetge, Wandy Peralta and Aroldis Chapman)

The Angels have collapsed yet again, which means pending free agent and cross-fit-gym-owner lookalike Noah Syndergaard is available. Even though he’s still a famous name, Thor is a league-average pitcher at this point — and one who has made only one relief appearance in his entire career.

Baltimore has surged into the fringes of postseason contention but still might be willing to part with ultimate innings-muncher Jordan Lyles. The O’s have traded veteran starters in-division at the deadline before (Andrew Cashner).

Ben Verlander shares his MLB Power Rankings for Week 16, with the Astros surpassing the Yankees for the No. 1 spot.

The current situation: While the rotation has stayed remarkably healthy, the bullpen has suffered. Michael King is out for the year after fracturing his right elbow, Chad Green has been out since April recovering from Tommy John surgery, Aroldis Chapman has been banged up and ineffective, and Jonathan Loáisiga missed time due to shoulder issues and has been a shadow of his spectacular 2021 self. Secondary arms such as Clarke Schmidt, Ron Marinaccio, Lucas Luetge, Wandy Peralta and, recently, Albert Abreu, have stepped up big, but there’s still room in this pen for one or two more dependable, late-inning hurlers.

The options: The list is long and full of terrors. Relievers are a volatile group, so a midseason trade for a bullpen arm could mean jubilation or disaster. It’s Schrödinger’s Reliever.

Daniel Bard: Colorado’s 37-year-old closer who beat the yips after a movie-like, seven-year journey out of baseball has great numbers and is a free agent this winter.

David Robertson: Round three? Robertson has been a Yankee twice before and looked totally cooked after an abysmal 2019 season and the missed 2020 season. But the 37-year-old revitalized his career with the USA Olympic team in Tokyo and latched on with the Cubs, for whom he has absolutely dominated this season (1.83 ERA in 39.1 innings).

Joe Mantiply: The most anonymous 2022 All-Star made one appearance for the Yankees in 2019 before he figured his stuff out. He’s not a free agent until 2027, so the Yanks would have to pony up a bigger prospect package to Arizona to get it done.

Andrew Chafin: The mustachioed lefty has been one of baseball’s best relievers (2.39 ERA in 37.2), and he plays for the Tigers, who just announced they’re down to “trade pretty much anyone.” Even though the Yanks already have a cadre of left-handers, Chafin’s career splits are perfectly even.

Michael Fulmer: The 2016 Rookie of the Year has battled injuries and inconsistency to reestablish himself as a solid, if unspectacular, single-inning reliever. Also, not sure if you heard, but the Tigers are trading everyone.

Joe Jiménez: Perhaps you’ve never heard of Jiménez, but you’re about to because *checks notes* the Tigers are trading everyone.

Jason Foley: A Long Island kid with a bowling-ball sinker and tons of control left who wouldn’t usually be available, but — one more time — the Tigers are trading everyone.