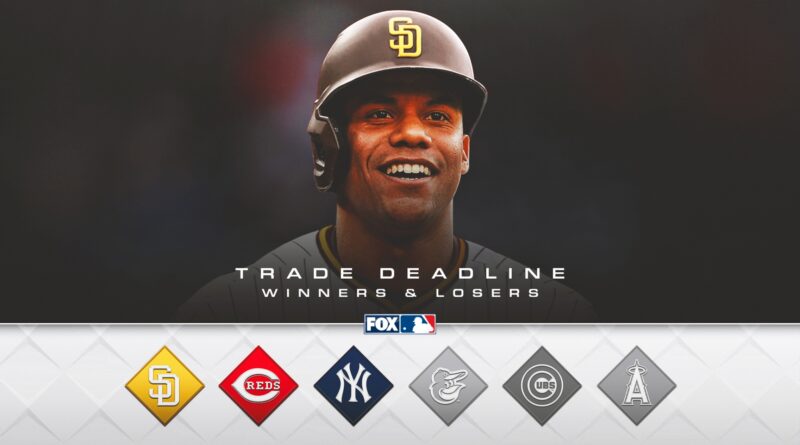 Everyone else tinkered according to their positions in the standings — except the Rockies, of course, who made no trades at all. They would qualify as losers in our list of teams that follows, but can you really lose if you don’t participate?

Of the teams who made trades ahead of the annual deadline, here is our quick read of who fared best and worst.

In Soto, they acquired a superstar at little cost to their current squad. All their other additions represent clear improvements, too, despite the Padres’ unconventional maneuver of essentially parting with the incumbent in exchange for his replacement.

New first baseman Josh Bell is a far better hitter than either Eric Hosmer or Luke Voit, both of whom the Padres surrendered Tuesday. New closer Josh Hader is a better pitcher than Taylor Rogers, whom he replaced. Late-blooming utility man Brandon Drury is no certainty, but he’s a good bet to at least hit left-handed pitching, and the Padres look good enough now that those marginal improvements might make the ultimate difference come October.

They did it in significantly less flashy fashion, but the Yankees also buttressed their roster without significantly hindering their future. In fact, there’s an argument that they aided it.

Right-hander Frankie Montas, their prize acquisition, has pitched like an elite No. 2 starter at times, and if he’s healthy, New York has a perfect fit to follow Gerrit Cole in the playoff rotation — this year and next.

What the Yankees needed was pitching upside, not pitching depth. So it made sense, then, that they traded Jordan Montgomery to St. Louis for injured outfielder Harrison Bader. Evidently, they were confident they would not want Montgomery to start a playoff game for them.

Bader’s acquisition makes sense for the same reason. He may not play until September, but the Yankees don’t need to care about August. Twelve games up in their division, they care about October.

Ben Verlander breaks down why the New York Yankees were the big winners of the MLB trade deadline.

This is the first time the Reds are even arguably deadline winners in a long time. General manager Nick Krall operated from a powerful position, and he wielded it well to deal both Luis Castillo and Tyler Mahle for significant packages of prospects.

The talent pool they brought back is big enough that it could alter the Reds’ trajectory — not this year or next, but perhaps in 2024 or 2025. Castillo and Mahle weren’t rentals, but Krall was smart to realize that they were not going to be part of the next good Reds team without signing extensions.

Inexplicably, Chicago traded only relievers. And not only rental relievers, either. Breakout right-hander Scott Effross has many more years of control remaining, but it is the Yankees who control his rights now. If he turns into another New York relief ace, the Cubs will have to explain why they held onto players who will not be part of their future instead of players who could.

Keeping outfielder Ian Happ isn’t crazy, depending on what the Cubs do this offseason. But keeping Willson Contreras defies easy explanation. It’s difficult to believe he could not have fetched more than the compensation pick the Cubs will get when he leaves this offseason.

The Angels acted late and decisively in trading Brandon Marsh, Raisel Iglesias, and Noah Syndergaard in a two-hour span just ahead of Tuesday’s deadline. The decisions netted them a couple prospects, most notably catcher Logan O’Hoppe, but mostly financial flexibility. The moves would inspire more confidence if they weren’t the precise inversion of moves that were intended to inspire confidence last offseason.

Five months ago, then-manager Joe Maddon was speaking of Marsh as the club’s center fielder of the future, acting as if Mike Trout would soon move to a corner. Iglesias, just signed to a four-year deal, was supposed to become the center of the club’s bullpen. General manager Perry Minasian spoke of Syndergaard, a high-priced gamble, as if he were the same level of talent as Trout himself.

Instead, Marsh didn’t hit but did play elite defense while Iglesias and Syndergaard each fell somewhat short of expectations. Minasian hit reset Tuesday. But is there enough time for another retool before Shohei Ohtani becomes a free agent?

It made little sense to pick now, the most exciting time for the franchise in six years, to trade away the team’s most popular player and lone All-Star. Sure, they netted a few pitching prospects for outfielder Trey Mancini and closer Jorge López, but did they meaningfully improve? And either way, at what cost? López remains under club control for two more seasons. Isn’t the point to win sometime soon?

Pedro Moura is the national baseball writer for FOX Sports. He previously covered the Dodgers for three seasons for The Athletic and, before that, the Angels and Dodgers for five seasons for the Orange County Register and L.A. Times. More previously, he covered his alma mater, USC, for ESPNLosAngeles.com. The son of Brazilian immigrants, he grew up in the Southern California suburbs. His first book, “How to Beat a Broken Game,” came out this spring. Follow him on Twitter @pedromoura.