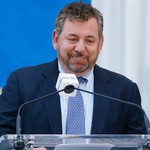 Investors welcomed the improvement that exceeded the consensus revenue of $71.5 million, according to FactSet (per MarketWatch). Shares of MSGE rose 8.7% to $67.87 on Monday morning, after hitting a 52-week low of $60.26 last Thursday.

Full-year results show a broader effect of the pandemic: for the 12 months ended June 30, total revenues fell 76% from the fiscal year prior, from $762.9 million to $180.4 million. Despite the last quarter’s improvement, the entertainment division’s revenues dropped 86% from $585.2 million to $82.3 million over the same period.

The entertainment division — which houses such venues as Madison Square Garden and Radio City Music Hall — improved its revenues to $31.1 million from $8.6 million, showing the concert business improved but was far from the $174 million it grossed in the fiscal fourth quarter of 2019 before COVID-19. MSGE’s Tao Hospitality Group, a collection of restaurants and entertainment venues, had quarterly revenues of $69.7 million, up from $1.3 million in the prior year period. Tao’s April 27th acquisition of Hakkasan Group accounted for $27.6 million of the group’s revenues.

MSGE’s acquisition of MSG Networks, a regional sports network that broadcasts sports teams in MSG Sports’ portfolio (New York Knicks, New York Rangers, New York Liberty), closed on July 9, 2021, and was not counted in the company’s fiscal fourth quarter financials. MSG Networks had total revenue of $166.1 million in the quarter, up 9% from the prior-year period.