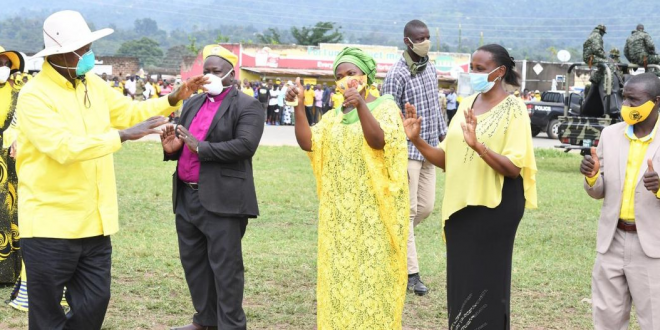 President Museveni was warned his former army comrades now in the presidential race not to risk and try to destabilize the county because they would regret their actions.

The two, Alliance for National Transformation (ANT) presidential flag bearer Gen. Gregory Mugisha Muntu and independent Lt Gen. Henry Tumukunde fought alongside Museveni in the 1981-1986 guerilla war.  But they have since broken ties with Museveni and like Colonel Kizza Besigye who has run against their formers for the presidency four times, accusing the president of clinging to power and veering off the objectives of the bush-war struggle.

Museveni speaking on Friday evening at the end of his Rwenzori campaign trail, he warned the two Generals against any attempts to destablise the country’s peace.

He said the two Dr Kizza Besigye failed to deliver to Ugandans when they had the opportunity and now want destablise the country something that his will not tolerate.

Museveni said some people’s excitement to join politics will only end in suffocating the electorate and the already gained development.

Museveni warned Ugandans especially young voters against being swayed by persons who have only joined politics because of their inner pride and selfish interests.

Museveni also re-echoed his blame on the 1995 Constituency Assembly delegates who included limited the president’s power in national decision making and vested it all in parliament.

Museveni reasoned that because of this, Parliament has failed to handle his views well thereby failing some projects he regards as a priority.  He said he has only managed to lead through because of his patience.

The Bunyangabu woman MP Peace Mutuzo says electorate in Tooro and Rwenzori need to solidify on the gains of NRM and shun any party that seek to terminate what is yet to be achieved.

The 1995 constitution is Uganda’s longest running constitution, though it has undergone major amendments.

The president who has been campaigning in Tooro and Rwenzori Sub-Regions on Friday extends his campaign trail to Bunyoro.