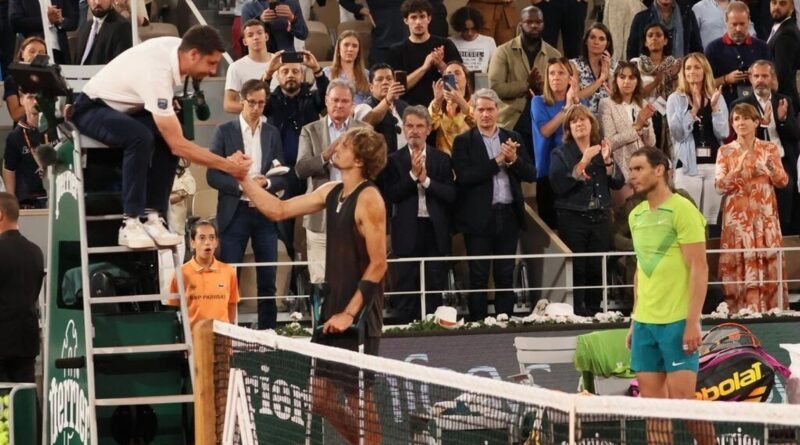 It was not the ending anyone expected following a three-hour contest that produced plenty of high drama as Rafael Nadal reached the French Open final for an incredible 14th time on Friday – albeit after Alexander Zverev was forced to retire hurt with an ankle injury while trailing 7-6(8) 6-6.

A semi-final between a Spaniard who has won the claycourt major a record 13-times and a red-hot German playing perhaps the best tennis in his career lived up to expectation for three hours and 13 minutes.

It took all that time for the players to exchange brutal shots from the baseline, break serve on numerous occasions and even miss multiple set points.

Yet they never even managed to complete two sets.

The German had been giving the 13-time Roland Garros champion a run for his money until he screamed out in agony after rolling his right ankle in the final point of the 12th game of the second set.

“Tough now. Very sad, he was playing an unbelievable tournament, he’s a very good colleague on the tour,” Nadal, who will face Norway’s Casper Ruud on Sunday, said.

“I know how much he’s fighting to win a Grand Slam.”

“It was a super tough match. Over three hours and we didn’t even finish the second set. Of course being in the final of Roland Garros is a dream without a doubt but at the same time that it finishes that way is tough. Seeing him cry like this is a tough moment.”

The 25-year-old Zverev, bidding for a maiden Grand Slam title, had matched the Spaniard with his power throughout the contest, breaking him at the start and going 4-2 up.

He had to save three set points after Nadal charged through the next three games but then streaked 6-2 ahead in the tiebreak.

But all four set points were wasted as Nadal, who turned 36 on Friday and is in pursuit of a men’s record-extending 22nd Grand Slam crown, came out on top in the tiebreak after 91 minutes.

“He started the match playing amazing,” Nadal said. “A miracle that first set but I was there fighting, trying to find solutions,”, Nadal said.

“When Sasha is playing well under any condition he is an amazing player. Under these conditions (with increased humidity) it was even more difficult for me to put him away.”

With the roof of Court Philippe Chatrier shut due to rain in the French capital, and Nadal struggling to put enough spin on his shots, he failed to hold serve throughout the second set as Zverev raced to a 5-3 lead.

But again he could not serve out the set, being broken as Nadal benefited from a string of mistakes by the German, including three double faults in the very next game.

Zverev was also slapped with a warning for swearing, which prompted the frustrated German to scream at the umpire “I did not say that bad word”.

Zverev refused to surrender and was going toe-to-toe with Nadal until the moment he twisted his ankle as he sprinted to retrieve a shot on his forehand and had to be taken off the court in a wheelchair.

The ear-splitting scream he let out as he collapsed to the ground in agony effectively signalled that it was game over for the German.

After several minutes in the locker room, the clearly-distressed German hobbled back to the arena on crutches to concede the match, hugging his opponent and waving to the crowd who were on their feet to give both players a standing ovation.

In Friday’s other French Open semi-final, Ruud became the first Norwegian man to reach a Grand Slam final when he set-up a French Open title clash with Nadal.

World number eight Ruud defeated Croatia’s Marin Cilic 3-6, 6-4, 6-2, 6-2 in a semi-final which was held up when a protester ran onto the court and tied herself by the neck to the net.

She wore a shirt which bore the slogan: “We have 1028 days left” before being eventually cut free by security staff.

The match resumed after a 15-minute delay.