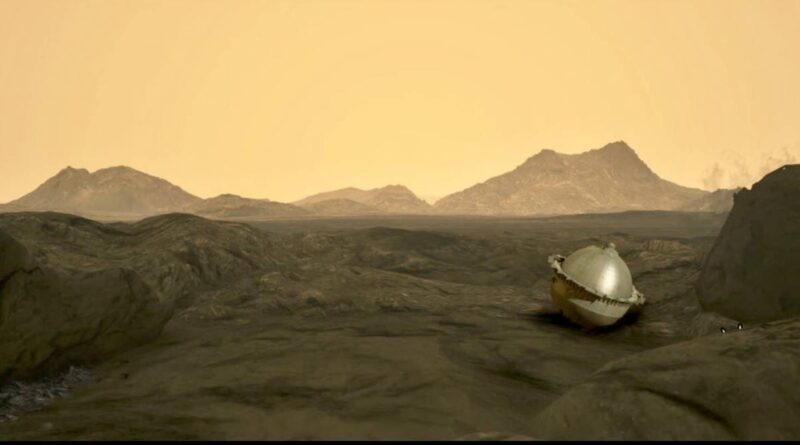 NASA’s DAVINCI mission to Venus is scheduled for launch in 2029. A new paper details this upcoming journey, a daring mission that could shed new light on the scorching hot planet’s mysterious, and potentially habitable, past.

Upon its arrival at the second planet from the Sun, the probe will plunge through Venus’ atmosphere, ingesting its gases for approximately one hour before landing on the planet’s surface, according to the paper published in The Planetary Science Journal. DAVINCI is designed to act as a flying chemistry lab, and it will use its built-in instruments to analyze Venus’s atmosphere, temperatures, pressure and wind speed, while taking a few photos of its trip through planetary hell.

Short for Deep Atmosphere Venus Investigation of Noble gases, Chemistry, and Imaging, DAVINCI is one of three upcoming missions planned for Venus, much to the delight of Venus nerds like myself. And honestly, it’s been a long time coming. NASA’s last mission to Venus, Magellan, arrived at the planet in 1989 and wrapped up science operations in 1994. Since then, NASA hasn’t sent out a specialized Venus mission, although the planet is, like, super hot—literally and figuratively.

Why is NASA sending a mission to Venus?

Understanding Venus helps scientists get a better view of our own planet. Venus and Earth may have started off similarly; the two planets share the same size, mass, and density. But today, Venus boasts temperatures that reach up to 880 degrees Fahrenheit (471 degrees Celsius), with a thick, carbon dioxide-rich atmosphere that traps heat the same way greenhouse gases do on Earth. It also boasts an eerie volcanic landscape. Something may have happened during Venus’s early history to cause it to develop such brutal and inhospitable conditions, and for it to end up so drastically different from Earth.

“Venus’s atmosphere holds the chemical clues to understanding a whole host of aspects of that planet, including what its starting composition was and how its climate has evolved through time,” Paul Byrne, associate professor of Earth and Planetary Science at Washington University in St. Louis, who was not involved in the paper, wrote in an e-mail. “The DAVINCI team in particular is hoping to establish whether Venus really did have oceans of liquid water in its past, and if so when, and why, those oceans were lost.”

How will DAVINCI measure Venus’ atmosphere?

In order to do that, DAVINCI will travel some 38 million miles (61 million kilometers) to Venus. The spacecraft will first perform two flybys of the planet, the first one taking place 6.5 months after launch. During these flybys, the spacecraft will analyze Venus’s clouds and measure the amount of ultraviolet radiation absorbed by the planet’s day side, and also the amount of heat being emitted from the Venusian night side (Venus is not tidally locked, but it has a very slow rotation rate).

Roughly two years after launch, the DAVINCI probe, known as the Descent Sphere, will descend through Venus’s atmosphere and sample the various gases as it makes its way to the surface. The 3-foot-long (1-meter-long) probe will require an hour to make its way down, experiencing hotter temperatures and higher pressures the further down it goes.

“It turns out that the Venus atmosphere is relatively clement up around 55 km [35 miles], but quickly starts to get hotter and far denser as you approach the surface,” Byrne said. “To say nothing of the sulfuric acid clouds, although thankfully they tend to dissipate once you’ve fallen to an altitude of around 47 km [29 miles].”

The Descent Sphere is equipped with five instruments designed to measure and analyze the chemistry and environment of the Venusian atmosphere; these tools, it’s hoped, will paint a better, more in-depth picture of the layered atmosphere. The probe will begin its interactions with Venus’s upper atmosphere when it reaches an altitude of 75 miles (120 kilometers) and it will eject its heat shield when it’s 42 miles (67 kilometers) from the ground. As soon as it dives below Venus’s thick layer of clouds, around 100,000 feet (30,500 meters) above the surface, the probe will attempt to capture hundreds of images. Venus’s clouds shroud the planet, covering its surface from view, so these images are set to provide some unprecedented views.

Aside from imaging the planet, the Descent Sphere probe will also breathe in some of its atmosphere. “The DAVINCI probe will have a small inlet on the exterior of the pressure vessel (basically a big, metal sphere) through which samples of the atmosphere at different altitudes will be drawn into the spacecraft (or, really, pushed in as the pressure outside the probe starts to dramatically increase over the interior pressure),” Byrne said.

When it lands, the probe should be moving no faster than around 25 miles per hour (40 km/hr). If it survives the atmospheric entry, the probe will—hopefully—land in the Alpha Regio mountains, which are roughly the size of Texas, according to the researchers behind the new paper. Under ideal conditions, the probe will operate for 17 to 18 minutes once it sticks the landing, but it isn’t really required to operate on Venus since all the precious data will have already been collected during its atmospheric plunge.

Although Venus today is a less-than-ideal place for life, scientists want to investigate whether or not the planet was ever habitable.

In September 2020, a group of scientists claimed that Venus may have signs of life in its clouds based on a detection of what may be phosphine in the Venusian atmosphere. Phosphine is considered a biosignature gas on Earth. However, the results were largely met with skepticism. But whether or not Venus was ever habitable during its past depends on if the planet once hosted liquid water oceans, or if it simply had a thick, steamy atmosphere.

“The DAVINCI probe will look to answer this question by measuring the ratios of various gases in the atmosphere,” Byrne said. “Those measurements, in turn, will help scientists understand which of their climate and interior evolution models are correct, and thus what the likely planetary history of Venus is—including whether it really was ever habitable.”