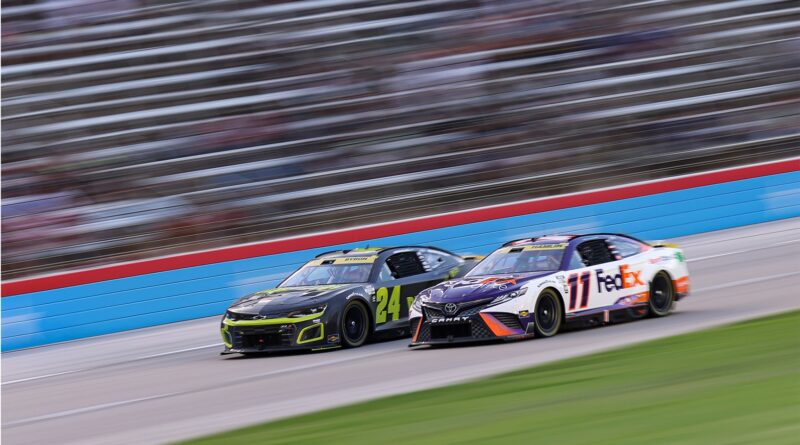 NASCAR says it didn’t have its eyes on William Byron turning Denny Hamlin under caution when it happened in real time Sunday at Texas Motor Speedway, but it reacted two days later.

NASCAR announced Tuesday that it docked Byron and his Hendrick Motorsports team 25 points and fined him $50,000 for his actions. The 25 points are essentially a penalty of 25 spots in race finishing position, as most spots are worth one point.

The penalty could have a big impact on the playoffs, as 12 drivers, including Byron and Hamlin, are still in contention for the championship with two races remaining in NASCAR’s second (quarterfinal) round. Talladega and the Charlotte road course remain, and the four drivers who don’t win in the round and sit lowest among the 12 in points will be eliminated from playoff contention.

Byron, who finished seventh at Texas while Hamlin was 10th, was 17 points ahead of the cutoff following Texas but now sits eight points below, as his point total dropped from 3,058 to 3,033.

William Byron on why he spun Denny Hamlin under caution

William Byron describes why he reacted under caution in tapping Denny Hamlin and says he didn’t mean to spin him out.

With the penalty, the drivers above the cutoff all saw their cushions increase by seven. Ninth-place Chase Briscoe moved into eighth, with his point total still at 3,041, and Austin Cindric is now ninth — the first one below the current cutoff — with 3,034 points.

Hendrick Motorsports announced Tuesday night that it will appeal the penalty.

Byron said he meant only to tap Hamlin under caution, not spin him, when the caution came out with about 66 laps remaining in the race Sunday at Texas. He was angry with the way Hamlin had raced him on a restart about 10 laps earlier.

“I was just trying to give him a light tap there,” Byron said. “Nothing malicious. You see it all the time.”

But the result was much more than a tap. Hamlin went from second to 16th and pleaded with NASCAR to give him his spot back.

NASCAR officials indicated Sunday night that the move was not allowable, and NASCAR Senior Vice President of Competition Scott Miller said late Sunday that they might have given Hamlin his spot back — if NASCAR had realized he was intentionally spun by Byron. NASCAR also would’ve considered dropping Byron to the rear of the field, which would’ve been around 25th at that time.

“When we were in the tower, we were paying more attention to the actual cause of the caution up there in dispatching our equipment,” Miller said Sunday night. “The William Byron-Denny Hamlin thing, we had no eyes on.

“We saw Denny go through the grass, and by the time we got to a replay that showed the incident well enough to do anything to it, we’d gone back to green.”

With the start of the playoffs, NASCAR has started streaming an in-car camera from every car. That feed is not available to the broadcast partner — it’s exclusively for use on the NASCAR app — but it would be available to officials in race control through the sanctioning body’s broadcast productions group.

Hamlin, for his part, suggested that NASCAR had to take action.

“If you’re going to allow it, then I’m just going to try to get all my teammates to take out all the competition under caution,” he said.

Denny Hamlin on his frustration with William Byron

Denny Hamlin shared his perspective on what happened on the track under green and how he’ll handle things going forward.

In addition to the Byron penalty, NASCAR fined Ty Gibbs $75,000 on Tuesday for door-slamming Ty Dillon on pit road in retaliation for Dillon’s swinging into him when leaving his pit stall. There were race members and NASCAR officials near Dillon’s car on pit road when Gibbs ran into him.

Because Gibbs drives full-time in the Xfinity Series, he does not get points in the Cup Series, and there was no points penalty. The 23XI Racing team was docked 25 points in the owner standings.

Bob Pockrass covers NASCAR for FOX Sports. He has spent decades covering motorsports, including the past 30 Daytona 500s, with stints at ESPN, Sporting News, NASCAR Scene magazine and The (Daytona Beach) News-Journal. Follow him on Twitter @bobpockrass, and sign up for the FOX Sports NASCAR Newsletter with Bob Pockrass.

Get more from NASCAR Cup Series Follow your favorites to get information about games, news and more.