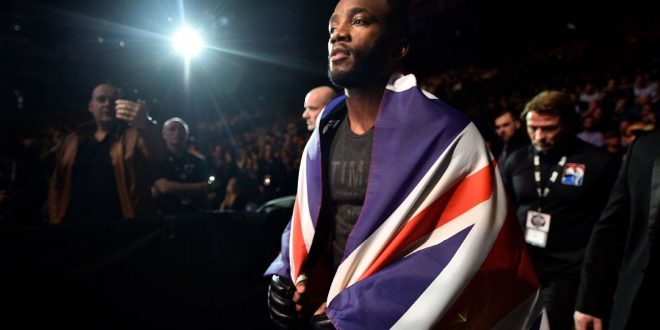 Late in the evening of March 19, 2019, there was a defining moment for a pair of fighters, both already well established in their careers. It happened at a UFC event in London, but the two men were not fighting each other. At least not officially.

Leon Edwards had done his scheduled fighting in the co-main event, showing off what made him one of the welterweight division’s top contenders by winning his seventh fight in a row. Edwards’ split-decision victory over Gunnar Nelson was not especially artful, but it kept the Jamaica-born Englishman on a roll.

Then came the headline bout, which was an opportunity for another British 170-pounder to get back into contention. Darren Till, coming off an unsuccessful title challenge months earlier, was matched up with a fighter who had not won in over two years. But this would be Jorge Masvidal’s night. He clipped Till in the second round with a lunging overhand left for a knockout that left the O2 Arena crowd in stunned silence.

Minutes later, Masvidal was backstage being interviewed when Edwards walked past. They exchanged words, something unkind about a possible meeting down the road and what was going to go down whenever they did go toe to toe. And then suddenly they were toe to toe. Masvidal had stepped away from his interviewer and walked toward Edwards. Before anyone could intervene, there was a flurry of punches.

“So I give him the three-piece with a soda,” Masvidal explained to ESPN’s Brett Okamoto afterward, “and then just glide out of there.”

Those might sound like fighting words, but in reality they were star-making words. In a single night, after nearly 50 fights and 16 years of an up-and-down pro career, Masvidal had authored a stunning KO and then a meme that would have an even bigger impact.

Masvidal had a newly sparkling aura, and it shined even brighter four months later, when his well-placed flying knee flattened previously undefeated Ben Askren in five seconds, the fastest knockout in UFC history. Less than two months after that, Masvidal was wearing a “BMF” belt created by the UFC especially for his fight with one of the company’s biggest stars, Nate Diaz. From there, Masvidal went right to a challenge of Kamaru Usman, and after he lost that title fight, he was rewarded with another just six weeks ago. Masvidal is a star and gets treated like one.

And Edwards? What did he get out of the “three-piece” combo? Well, he got a gash on his cheek. That was about it. OK, he did also get a July 2019 date in the Octagon with a former UFC champion, but Rafael dos Anjos was in the midst of an unsteady skid, four losses in five fights. When Edwards beat RDA, it generated no momentum at all. And Edwards has fought only one time since then, although he did reject an offer to challenge Usman on short notice last July because of pandemic-related logistical problems in England.

Edwards is the forgotten half of the Masvidal confrontation just like he’s been a forgotten man among welterweights. At this point, his unbeaten streak has reached nine fights. But he has become Exhibit A illustrating the combat sports truism that winning is not what matters most. To be a star in the fight game, you need something more. A string of stunning finishes. A way with words. Something that moves the needle.

Or you need to find yourself locked inside a cage with someone who has the star power to boost your visibility and help you get where you believe you deserve to be.

That is the opportunity that Edwards will have on Saturday, when he faces Diaz at UFC 263 in Glendale, Arizona. Diaz hasn’t fought in the year and a half since his TKO loss to Masvidal, which was just his second fight since 2016. He has been all but retired, but that has not doused the shiny spotlight that follows him around. There are two title bouts at the top of Saturday’s bill, yet the Diaz fight has been getting a major share of the attention. Adding to the intrigue is the fact it’s the first non-main event to be scheduled for five rounds in UFC history without having a title at stake.

Sometimes the fight game does not follow a logical progression. Edwards already owns victories over dos Anjos, Donald Cerrone (back before “Cowboy” was badly fading) and ranked 170-pounder Vicente Luque. Any one of those wins should be a bigger deal than a win over Diaz — Edwards is nearly a 5-to-1 favorite — but that is not the case and it’s not even close. If Edwards wins this weekend, the sky is the limit. He would be well on his way to a meeting with Usman, and that title shot could come soon if the UFC can’t come to terms with presumed next challenger Colby Covington.

A date with Diaz can change one’s whole career narrative.

If anyone knows how much of a game-changer Diaz is, it should be Edwards. Their paths crossed back in 2015 on the night Edwards suffered his last loss — to Usman. That fight did not play out under the spotlight the matchup would be thrust under today. It was an early prelim on a card that at the time seemed run of the mill but in retrospect was cream of the crop. No fewer than six UFC champions competed that night.

Dos Anjos defended his lightweight belt in the main event. Junior dos Santos, a former heavyweight champ, was in the co-main. Also on the bill were four future champions: Usman, Charles Oliveira, and making their Octagon debuts, Valentina Shevchenko and Francis Ngannou.

So Edwards’ prelims slot was buried beneath a whole lot of talent. It was largely overlooked.

But there was another non-champion’s name on the fight card that no one was overlooking. Nate Diaz was on the card — the main card — and he made sure everyone remembered him.

His victory over Michael Johnson was a boxing clinic with all of the requisite extras — pointing, laughing, hands down, chin sticking out — that make Diaz fights must-see. In this case, though, the fight was not as memorable as the postfight.

As he was being interviewed inside the cage about his win, Diaz took the conversation in a whole different direction. “You’re taking everything I work for, motherf—–,” Diaz yelled in an out-of-left-field callout of Conor McGregor. “And I’ma fight your f—ing ass.”

Instantly, the sport had another attention-grabbing and star-making meme. After a fight card featuring a half-dozen champions, Diaz was all anyone wanted to talk about. And the callout worked as Diaz and McGregor headlined two of the biggest cards in the last 10 years.

That is the rocket fuel that Leon Edwards will have at his disposal this weekend.