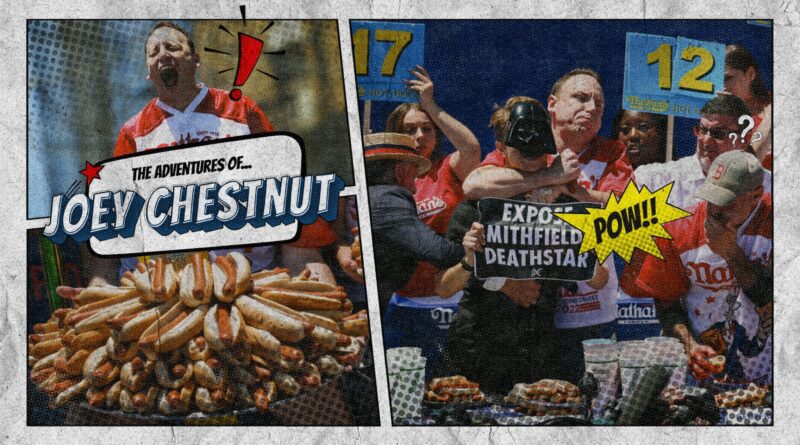 Nothing was going to stop Joey Chestnut from winning his 15th men’s championship at the annual Nathan’s Hot Dog Eating Contest at Coney Island, N.Y., on the Fourth of July.

Not even an exuberant protestor.

Looking to make a wager on your favorite sporting event? Head on over to FOX Bet and make your picks.

During the men’s competition, a protestor came on stage and bumped into the champion. Chestnut then proved hot dogs and buns aren’t the only things he can quickly put down as he put the protestor in a mini chokehold. A security guard went on to remove the protestor as Chestnut continued downing dogs.

Chestnut won his seventh title in a row (as a -3000 favorite at FOX Bet) by consuming 63 hot dogs and buns but, because of the incident, fell well short of the pre-competition over/under line of 74.5.

As a result, FanDuel refunded all wagers on the over/under, FanDuel spokesman Kevin Hennessy said.

“We did feel that Mr. Chestnut might have been thrown off his game by the protestor, so we decided to refund all straight bets on over 74.5 hot dogs,” Hennessy said Tuesday.

“It was the most popular by far for our online customers in New Jersey, where it was No. 5 in terms of overall sports behind baseball, tennis (Wimbledon), basketball and soccer.”

Other sportsbooks including DraftKings and Barstool also decided to refund their bettors. The customer is always right, right?

Hopefully next year Chestnut gets a real chance to go over the number. Until then, which sporting event are you looking at placing a bet on (hopefully no fan interference)? Either way, head over to FOX Bet to place your wagers!