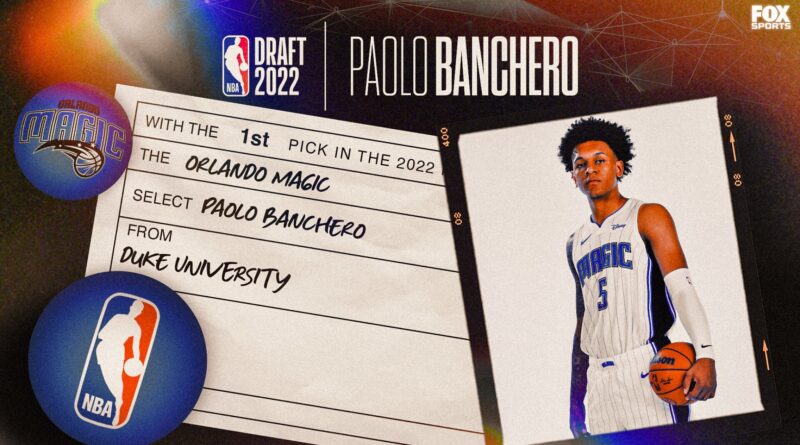 The Orlando Magic started NBA Draft night in dramatic fashion when they selected Paolo Banchero with the No. 1 pick. But should it really have been that shocking?

For a roster in great need of a centerpiece player who can help the organization start winning games immediately, the Magic got the most NBA-ready talent in this draft class at No. 1. Sure, Orlando did not work out Banchero, but they had 39 games to watch in Duke’s Final Four season, not to mention a bond with his agent, Mike Miller, who the Magic selected No. 5 overall in 2000.

The Orlando Magic selected Duke’s Paolo Banchero with the No. 1 overall pick in last night’s NBA Draft. Skip and Shannon share their biggest takeaways from the NBA Draft.

Orlando has plenty of holes, but its future starts with finding a dynamic, explosive playmaker on the offensive end of the floor who could have superstar potential. This is a team that had the second-worst offensive rating in the NBA last season at 103.9.

Banchero’s frame is exceptional. At 6-foot-10 and 250 pounds, he has a unique blend of strength and mobility. Unlike many rookies, he does not need any time to develop his body — it’s a finished product.

Duke played through Banchero in isolation on its journey to a regional title, with the Second-Team All-American and ACC Rookie of the Year playing in all 39 contests. His durability, ability to withstand contact and tough shot-making consistency gives him the potential to be a multidimensional scorer in the NBA. As a post-up scorer, Banchero can punish a team that switches on him, and he’s got one of the best mid-range jumpers in the draft class.

What’s especially encouraging is that the Duke superstar is also a great distributor at his size. Over the last 17 games of the season, Banchero averaged four assists per contest. This is where Banchero can be a team’s main piece — he truly made others around him better and was comfortable reading a situation and finding an open man.

So, what exactly determines Banchero’s ceiling in The Association? The perimeter shot.

Banchero only shot 33% from beyond the arc this past season and struggled to find consistency in that department. There were flashes of what he can be on the perimeter, but it will take some time for him to fully develop in this area.

His defensive skill set is another area that needs to grow. As much as Banchero is an attacker on the offensive end and such a handful to guard, his body build led him to getting beat from time to time off the dribble. It’s not as if Banchero has major strides to make in these areas, but if he does, he can go from being a quality No. 2, to being a franchise-changing No. 1.

The Magic certainly believe Banchero can be the headliner, and that he’s not done evolving.

“This is one of the underreported things about Paolo (Banchero), that because of his precocious build, he doesn’t have places to grow,” said President of Basketball Operations Jeff Weltman on Thursday. “We just feel that this is a 19-year-old who has so much growth potential. We feel he was the best player in college basketball, and we feel he will continue to grow for years to come because he’s a hard worker, and incredibly talented. He’s going to be one of those guys who’s kind of built for playoff basketball.”

Magic head coach Jamahl Mosley is focused on putting Banchero in the best position to not just succeed, but benefit everyone around him. Mosley’s thoughts on who Banchero is as a person also stand out.

“From Day 1 we’ve constantly talked about IQ, character, versatility, winning mindset with our guys,” Mosley said. “(Banchero) fits all of those things and more. The character of the guys we have on this team, (Banchero) fits that. That’s what we’re building and that’s what we’ll continue to build.”

Orlando is looking to answer many questions as they try to rebuild, with Franz Wagner as the biggest positive coming off a strong All-NBA Rookie First Team season. It will be interesting to see what Markelle Fultz (No. 1 overall pick in 2017) looks like in a healthy season, and how second-year player Jalen Suggs (No. 5 overall in 2021) responds from his ankle injury. But, this roster needed something close to a definitive in the draft, and Banchero should be able to offer an immediate impact.

In Orlando, the Magic and their fans hope Banchero’s strong track record will continue.