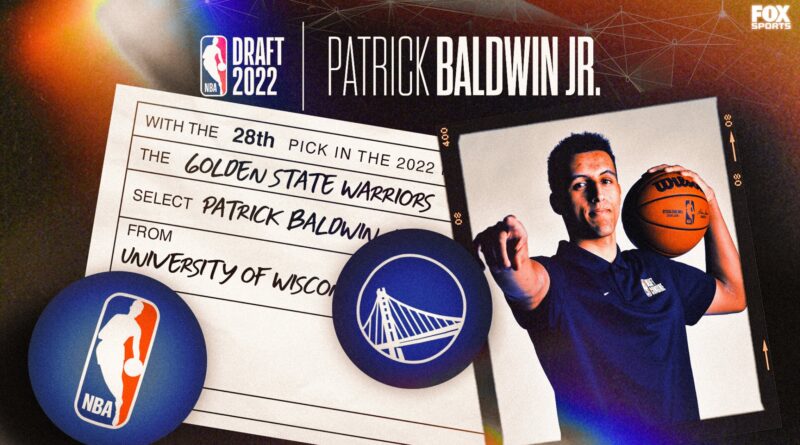 Patrick Baldwin Jr. entered the NBA Draft as one of the biggest boom-or-bust prospects in the class, projected to be selected somewhere in the 20s by a team that likely could take on a project.

These types of prospects, more times than not, really need the right organizational fit to pan out in The Association. Baldwin could not ask for a better landing spot, because he’s heading to the world champions.

The Golden State Warriors went with upside in selecting the 19-year-old Baldwin with the 28th pick in the draft, and why not? Player development is a big reason why the organization has won four of the past eight NBA titles.

Look no further than Jordan Poole, the 28th overall pick in the 2019 draft. He became a vital weapon for the Warriors on their run to this year’s title after developing with the Santa Cruz Warriors, the organization’s G League affiliate, early on in his career.

There is a heavy level of doubt surrounding Baldwin, and an even larger level of mystery with him as he turns pro. Out of Hamilton High School in Wisconsin, the versatile, 6-foot-9 forward carried a ton of buzz following his junior year, in which he averaged 24.3 points and 10.8 boards, and earned Gatorade State Player of the Year. His senior season, though, was ruined by injury. After a 43-point performance in the opener, Baldwin suffered a dislocated left ankle in his second game and missed the rest of the year.

Even with the injury, Baldwin was recruited by the heavy hitters across college basketball. He passed on playing for Mike Krzyzewski at Duke in favor of playing for his father, Patrick Baldwin Sr., at Milwaukee. But Baldwin Jr. appeared in only 11 games, averaging 12.1 points and 5.8 rebounds, before re-aggravating his ankle injury and being shut down in February.

Joy Taylor hands out report cards to the Lakers, Warriors, Heat and other teams after the 2022 NBA Draft.

In four months, Baldwin went from a potential lottery pick heading into the college basketball season to being a fringe first-round prospect.

So why select Baldwin?

If he pans out, he could be a matchup nightmare in the NBA. He has a 7-foot-2 wingspan and a 9-foot-2 standing reach. That length combined with a pure shooting form and the ability to comfortably put the ball on the floor gives him such a unique skill set that can fit in the modern-day NBA. And while he was inefficient in college and shot just 27% from beyond the arc, Baldwin was playing on a 10-22 team that led to his father getting fired. He’ll be surrounded by better pieces at the pro level.

So, what do the Warriors need to figure out with Baldwin? His athleticism is a cause for concern. At the NBA Combine, he posted the second-worst time in the lane-agility drill. Pair that with an underwhelming 26.5-inch max vertical leap, and there are real concerns about who Baldwin can guard at the professional level.

Golden State’s developmental staff will have to work on his footwork, stance and speed in order to keep Baldwin from being a liability on that end of the floor. As the son of a basketball coach, though, Baldwin has a feel and IQ for the game.

The Warriors know Baldwin carries question marks, but they embrace the idea of untapped potential.

“He’s going to have to put it together. He hasn’t yet,” said Warriors general manager Bob Myers. “He was a top-10 recruit out of high school. Now he’s in the NBA, so he’s gonna have to get up to speed. We invested a lot in our player development, and we believe that we can take talent and hopefully cultivate it. We think he’s one of those guys.”

It’s likely that Baldwin will spend the upcoming season in Santa Cruz with the G League team building himself up and getting consistent reps in what the Warriors hope will be his first healthy season in three years. His summer league status will be determined by Golden State’s training staff this week. Baldwin was not limited in the pre-draft process and said last week that his ankle is at about 95 percent.

The best way to sum up an outlook for Baldwin may have come from a scout who provided an anonymous opinion ahead of the draft in our boom-or-bust story.

“Baldwin is a project, but it’s very interesting to think about the idea of him panning out in the NBA because he fits the pick-and-pop role for a team. When watching him at his best, I can’t help but be intrigued because he has the skills of a lottery pick. The health concerns are real, and his combine was not encouraging.

“He’s a risk, but the reward could be great.”

That’s a risk the world champions have the luxury of being able to take, and it’s why this is such a great fit for Baldwin as he tries to overcome the adversity of the past two years with one of the best organizations in the league.