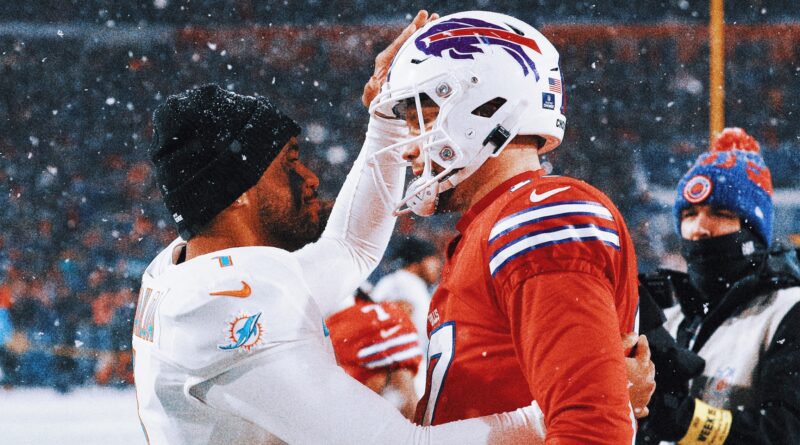 The task for the Miami Dolphins (9-8) just got more difficult as starting quarterback Tua Tagovailoa (concussion protocol) has been ruled out against the Buffalo Bills (13-3) in an NFL Wild Card Weekend playoff game Sunday between AFC East Division rivals.

It gets worse for Miami, in the playoffs for the first time since 2016. Backup QB Teddy Bridgewater did not play in the regular-season finale (broken pinkie on throwing hand), and the Dolphins said rookie Skylar Thompson will start against the Bills.

Here’s everything you need from a betting perspective on the Dolphins-Bills game, from the point spread, moneyline, total Over/Under, insights and expert pick (odds via FOX Bet):

Joe Burrow is the best fourth-quarter quarterback in the NFL, according to an anonymous player

When the Bills hosted the Dolphins just a few weeks ago, Buffalo was -7. That was against Tua Tagovailoa on the third game of a three-game road trip. The market is telling you that Tua will not being playing and (hopefully?) Teddy Bridgewater will be under center. If it’s Skylar Thompson, the Dolphins can forget it.

Bridgewater may offer some hope, but he’s appeared significantly in three games this season, with losses as a starter against Minnesota and New England, and he was shaky in relief in Cincinnati.

Oddly enough, the last time Miami made the playoffs, was in January 2016 when Ryan Tannehill got them there, but was injured, and Matt Moore started. The Dolphins lost, 30-12.

Since 2002, quarterbacks making their first NFL playoff start have gone 17-37-1 against the spread and 18-37 straight up.

Temperatures are expected to be in the high 20s or low 30s Sunday, and there’s no precipitation in the forecast. Josh Allen was tied for second in the NFL with 14 interceptions, and has not looked particularly sharp since the elbow injury. But can Miami’s defense put up much resistance?

The Dolphins offensive style of play of late has been shooting for bigger plays on early downs, and that has left them in far more third-down situations, many of which are third-and-long.

However, there has been a massive difference between Tua Tagovailoaand Skyler Thompson in these situations.

Unfortunately for the Dolphins, I don’t envision these conversion rates increasing much against the Bills with Thompson at the helm.

What does this mean on Sunday in Buffalo?

Shorter drives for the Dolphins, both in total yardage and time of possession.

And that means better starting field position for the Bills and more time to be on the field offensively to score points.

While Josh Allen has struggled since the bye and has completed 60.6% of his passes (28th) for 6.9 yards per pass attempt (20th), I think the Bills offense is capable of hanging a crooked number on the Dolphins defense.

Are you ready to make an NFL bet? If so, head over to FOX Bet for all your wagers.