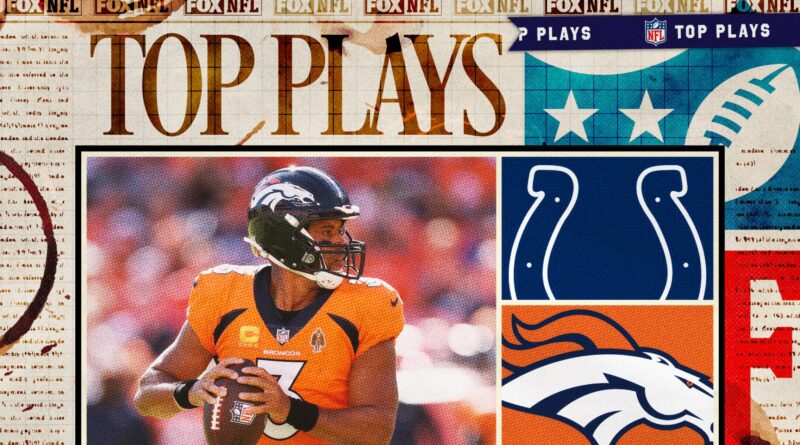 The Indianapolis Colts defeated the Denver Broncos 12-9 in overtime on Thursday Night Football to open Week 5 of the NFL season.

The Colts improve to 2-2-1 on the season with the road win, while the Broncos fall to 2-3.

Indy was without starting running back Jonathan Taylor, who was sidelined with an ankle injury, while Denver was missing star back Javonte Williams, who is out for the year after tearing his ACL in Week 4.

Here are the top plays from Thursday’s matchup.

Misfortune struck early for the Colts when Nyheim Hines, who was expected to be very involved in Thursday’s action with Taylor out, got injured on the first drive of the game.

He was taken straight to the locker room to be evaluated for a head injury. He has since been ruled out for the remainder of the game due to NFL concussion protocol.

Denver moved the chains on its first drive, which included an impressive 18-yard pickup from Russell Wilson. But the Broncos stalled in the red zone and settled for a field goal to take an early 3-0 lead.

Colts running back Deon Jackson was able to provide a small spark for Indy as the first quarter got underway.

Broncos get it back

It was more trouble for the Colts, as Matt Ryan threw a pick in the red zone midway through the second quarter. Denver safety Caden Sterns came up with the interception and returned it 23 yards to give the Broncos the ball right back after they took a 6-0 lead with their second field goal of the game.

The Broncos’ defense was a force to be reckoned with in this one, sacking Ryan four times in the first half, two of which came on the Colts’ final drive of the second quarter.

Indianapolis was able to avoid a shutout by getting a field goal on the board ahead of halftime, however, to keep things close.

Denver finally came up with a monster play in the third quarter, when Wilson found Courtland Sutton on a 51-yard strike up the middle.

The Broncos made up for the lost opportunity when Sterns came up with his second interception of the night, picking off Ryan just outside Denver’s red zone.

The turnover gave the Broncos great field position, which they turned into three points on the ensuing drive. It was a three-point game, 9-6, headed into the fourth quarter.

There was another turnover at the top of the fourth quarter, this time with the Colts’ defense picking off Wilson.

Wilson briefly visited the medical tent for a possible head injury before rejoining the game on the Broncos’ following drive.

Wilson got picked off once again just as the two-minute warning approached.

The Colts hustled downfield with under a minute to go and were able to knock in the game-tying field goal.

The Colts were the first to strike in overtime, nailing a 48-yarder to take a 12-9 lead.

What could have been

The Broncos got a huge boost from Jerry Jeudy on the following possession, but they weren’t able to capitalize on the big gain. Stephon Gilmore deflected Wilson’s fourth-down pass in the end zone to seal the Colts’ 12-9 victory.