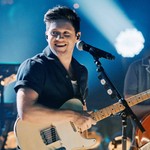 He really dove all the way in, though, with a bit in which the 8-handicap golfer took to the links with the Jonas Brothers for the weirdest one-hole play-off of all time. After spinning the Wheel of Stupidity, each man was given his handicap for the day, and man were they doozies.

Kevin Jonas was ordered to tee off while his compatriots blew noisy air horns, Joe had address the ball after spinning around 10 times, Niall was saddled with wearing a full kilt and bagpipes while swinging and Nick had to cover the shaft of his club in lube. It went about how you’d expect, with Kevin totally shanking it to the distraction of three blaring horns, while Joe’s dizzy club swing went straight into the woods and Nick’s slick stick slipped right out of his hands.

Niall skronked out a little ditty on the bagpipes and actually smashed a pretty decent shot while working around his instrument. No spoilers, but it was not PGA-level golf, though Nick’s putt from 180 yards out was a sight to behold. “Since you’re losers, you can wash our balls,” Horan laughed at Nick and Joe, who ended up on the short end of the shoot out.

Watch Horan’s monologue and golf round below.