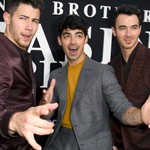 The official Jonas Brothers account left a comment celebrating the surprise with a trio of rocket emojis.

Joe Jonas and Kevin Jonas join Nick on “Selfish,” one of the bonus songs featured on the deluxe version of Nick’s latest solo album.

Also landing on the deluxe Spaceman set is a song titled “Dangerous,” as well as “chill” versions of album tracks “Don’t Give Up on Us,” “2Drunk” and “This Is Heaven.”