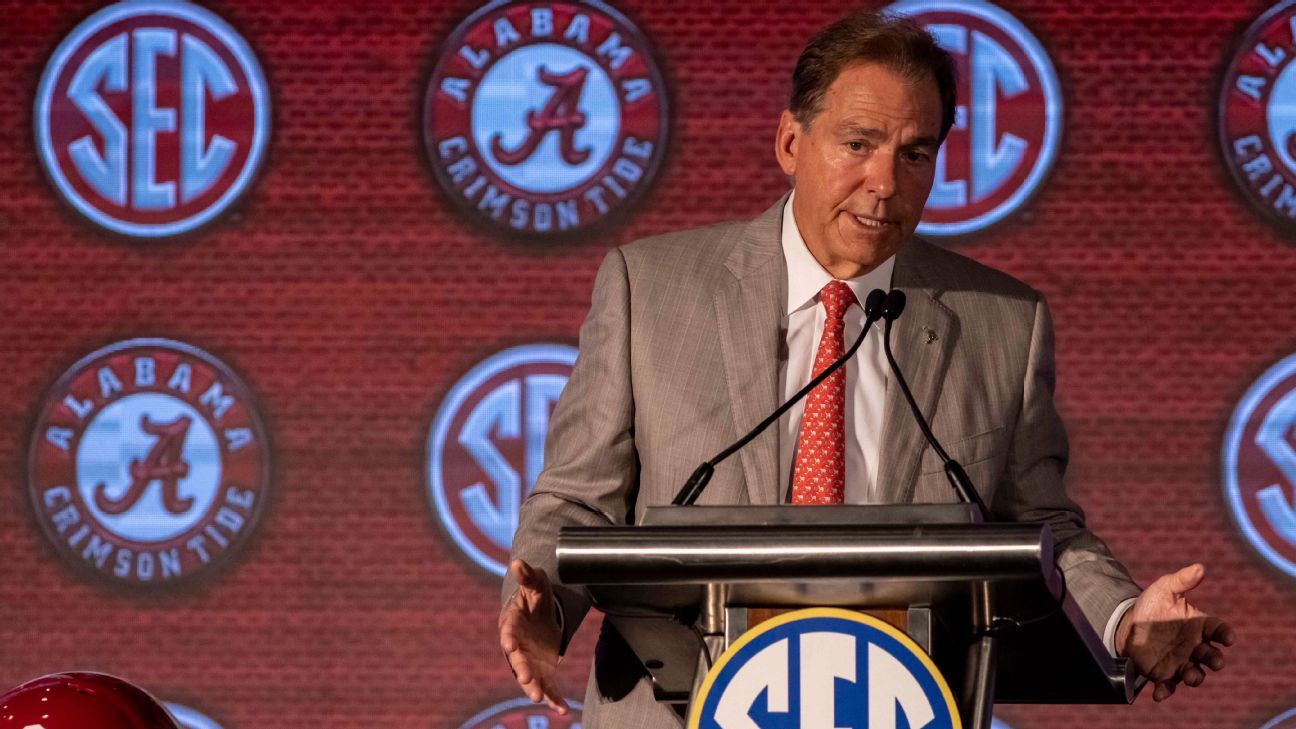 TUSCALOOSA, Alabama — From a potential expanded College Football Playoff to another round of conference realignment to players being allowed to profit off their name, image and likeness for the first time, the sport has never experienced an offseason of so much change.

Alabama coach Nick Saban, who has guided the Crimson Tide to a record six national championships, discussed many of the dramatic changes in college football during an exclusive interview with ESPN.

How has your team fared in getting players vaccinated for COVID-19?

All but one of our guys has been vaccinated, but it could still be an issue. They say if 90% [of your team] is vaccinated, you’re OK, but who knows? At least if you’re vaccinated you don’t have to quarantine guys.

Are you confident that we’ll get back to full-capacity stadiums without interruptions this season?

Somebody else has got to make that decision. Do you just let vaccinated people in? Do you say everybody can come to the game at their own risk? I don’t know what they’ll decide based on all of that. I’d love to be able to get back to normal, but somebody has to make a decision about what’s really safe.

What have you told your players about profiting off their name, image and likeness?

The way I explain it to the player is, “Hey, you’ve always been able to work.” Just a few years ago, almost all players worked. Then when we got to where you could pay for summer school and they got this extra money for cost of attendance, most guys didn’t work. Some guys would do internships or whatever, but they didn’t feel like there was a need to work. I said this is basically another way you guys can make money by working.

You’re allowed to have representation for it, but at the same time probably what you’re going to make on name, image and likeness is peanuts compared to what you can make if you develop a career as a player. So you’ve got to prioritize and understand that there’s nothing different about this. The more value you create for yourself, the more opportunities you’re going to get in name, image and likeness and the more opportunities you’re going to get relative to the next level. It still comes down to being the best player you can be. If you get distracted by that then you’re really kind of penalizing yourself.

You mentioned earlier this summer that quarterback Bryce Young had close to $1 million in NIL deals. Are any of your other players making significant money off their NIL? Are you worried about inequality in the locker room?

I don’t think anybody else is making significant money, but the players that have a name are making something. [Equality in the locker room] is my biggest concern. I haven’t heard any [complaints] so far. I told our players, “When you play in the NFL, everybody doesn’t make the same.”

Everything in college has always been the same. That’s not going to be the case anymore. Some positions and some players are going to have more opportunities than others, but there’s no sense in being envious about that. You have to create the most value you can for yourself. I don’t know how it’s going to affect people.

How much time does your staff spend educating your players about the difference between a good NIL deal and a bad one?

We have a whole department that handles it, and they have to get every deal looked at. I told the guys that every deal is not a good deal, and you’ve got to make sure you want your name associated with whatever you do.

Your team added former Tennessee linebacker Henry To’o To’o through the transfer portal. Georgia had holes in its secondary and added two defensive backs from West Virginia and Clemson. Is the transfer portal only going to widen the gap between the haves and have-nots in college football?

We would have benefitted more if we had more space. We had such a good recruiting year we didn’t have much space. In theory, the best players are not going to leave the best programs. But there will be people that want to leave and go to the best programs. Some [players on] the back end of your roster who think they might not play may leave, but that doesn’t hurt you that much.

I think it’s going to create less opportunities for players, not more. If you look at some of the [Group of 5] schools, why would you recruit [high school] players when you can take transfers? You can only transfer once. You know if you get 19 transfers they’re going to be here. If I get a good [high school] player, he might leave. Why would you recruit high school players? That’s just a lot of opportunities the high school kids won’t get.

How much more difficult is roster management because of the transfer portal?

A lot of people say you should get one for every guy that leaves, but if you do that you’re going to promote running guys off. If you knew you were going to get an initial for every guy that left, every player you had on your team who you thought was not going to be a contributor, you could try to get him out the door and replace him with someone else. I don’t think that’s good for players. I don’t think you want to promote that kind of environment.

We’ve got players here that like being here, and they don’t mind their role on the team. If you push them out the door, you’re penalizing them. My theory has always been that if we recruit a guy and he doesn’t meet our standards, that’s our fault — not his fault. Why should he be penalized? I don’t know how many coaches would look at it that way if you’re trying to make your team better.

The College Football Playoff is considering expanding to 12 teams. What are your thoughts on adding eight more teams to the CFP?

What do you think about conference champions getting automatic bids to the CFP?

I don’t like the fact that the [Group of 5] conferences want their conference champions to be in the playoff. I coached at Toledo and we were conference champions. We sure as hell didn’t have any business playing Florida. That’s not the best teams. If you are going to do it, get the best teams. The other argument is are we getting the four best teams now? Is there somebody not getting in that could win? I think you could make an argument for Texas A&M [last season], but we beat them by [28] points. They had a good team.

I don’t really know the answer to that one. I’m asking all the questions that I ask myself and how does it fit? This is not the NFL. If we want to be an NFL model, then we ought to say, “Alright, Alabama, if you want to sponsor a team, go get the best players and they don’t have to go to school and we’ll pay them.” We’ll have a playoff and do everything like the NFL, but it ain’t the NFL.

But are we headed to an NFL model in college football with all of these changes?

It kind of looks like it. College football is for guys to get an education, and the more we pay players, the less sports we’re going to have. If we start paying players, instead of having 21 sports, we’re going to have nine. There will be no something — golf team, track team, something. Then you’re eliminating opportunities for people in non-revenue sports.

Where everybody misses the boat a little bit is that college athletics is not a business. People who think it’s a business, I think they have the wrong perception. It’s revenue producing, but nobody takes the profit. When Wayne Huizenga owned the Dolphins, he paid $500 million for the team, he made $50 million a year, and he sold it for $950 million. That’s business. Well, in college, all you do is reinvest all of the money into all of the other sports, facilities and scholarships. There’s more than 300 people having an opportunity, and not just 85 football players.

Then the argument is, “Well, the coaches make a lot of money.” But do we create value or not? Alabama is making more money than they ever made before I came here, whether they pay me more or not.

Do all of these changes affect how much longer you want to coach?

It’s different, there’s no doubt about that, and it’s going to change a lot of things. To me, you have to adapt to whatever the rules are. It’s challenging to adapt, but you just have to adapt. It doesn’t make me think that I don’t want to coach or that college football is bad. It’s just going to be different.

Oklahoma and Texas recently accepted invitations to join the SEC no later than the 2025 season. How would you like to see the league structured once the Longhorns and Sooners are members?

If SEC teams are playing nine or 10 SEC games and the playoff is expanded, that means there will be less opportunities for Group of 5 and FCS programs to schedule guaranteed games, which supplement a large portion of their athletic budgets. Does that concern you?

I’m not even opposed to giving them money so they can have programs. But nobody wants to come to watch some of these games, and the players are getting to the point where they don’t want to play in these games, just like players don’t want to play in bowl games. How many players opt out of bowl games? How many players did Florida have that didn’t play in a bowl game last year? None of that is good for college football, and I don’t think it’s good for the kids, either.

The revenue sharing part, they’re not going to be able to have programs if we don’t play these schools. If they didn’t get $1.6 million for coming to play these games, they probably couldn’t sustain their program. Again, you’re just going to keep minimizing opportunities for players to play. I’m not really wanting to play those schools, but they need to get some money. We still have to do some kind of revenue sharing with them or they’re not going to have programs. Nobody is going to want to do that, but then you’re going to have a bunch of kids that don’t get an opportunity to go to college or get scholarships and have an opportunity to play. I don’t think everybody looks at the whole picture. They say, “OK, you’re making all of this money in football,” but they don’t look at where all the money is going.