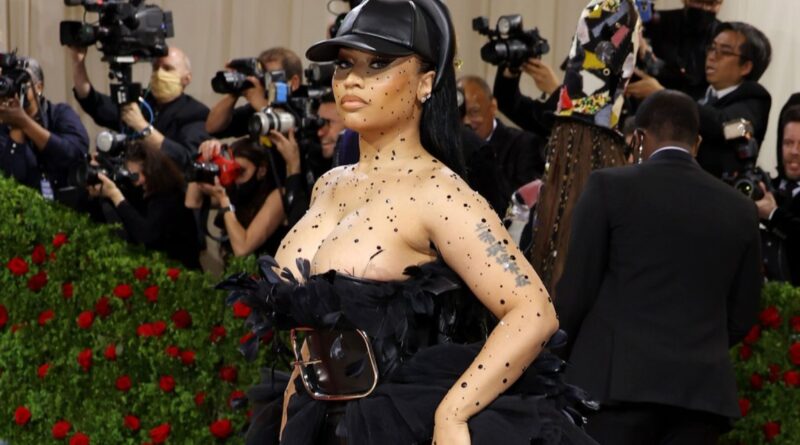 The new merch, which includes a unisex T-shirt and matching hoodie, is available exclusively at Amazon. ‘Queen Radio’ returns on Aug. 11 at 10 p.m. ET.

Nicki Minaj attends The 2022 Met Gala Celebrating “In America: An Anthology of Fashion” at The Metropolitan Museum of Art on May 02, 2022 in New York City.

Attention Barbz! Nicki Minaj dropped a limited collection of merch on Thursday (Aug. 11) to coincide with the long-awaited return of her popular radio show.

The unisex merch, available exclusively at Amazon’s Queen Radio storefront, consists of a black T-shirt ($35) and black hoodie ($60) featuring a colorful illustration of Minaj on the front sporting pink hair with a pop of turquoise. Both pieces are available in sizes ranging from S-XXL, while supplies last.

Queen Radio will make its return on Thursday at 10 p.m. ET/7 p.m. PT via Amazon’s Amp app. The rapper announced her partnership with Amazon and the return of Queen Radio back in March.

“I am very excited to be partners with Amazon on bringing back Queen Radio,” Minaj said on Instagram Live at the time, according to Complex. “Queen Radio is something that is so dear to my heart. Of course, there have been times where I’ve thought about not wanting to do Queen Radio, or any radio for that matter, but why not?”

Minaj will debut her new single “Super Freaky Girl” during the show and take calls from fans.

The 39-year-old rapper has been busy this summer. In addition to bringing Queen Radio back, Minaj headlined Essence Fest and Wireless Festival in July and linked up with Drake and Lil Wayne for a Young Money reunion at October’s World Weekend in Toronto last weekend. Later this month, Minaj will receive the coveted Video Vanguard Award at the 2022 VMAs.

“Nicki has broken barriers for women in hip-hop with her versatility and creative artistry,” Bruce Gillmer, Paramount’s president of music, music talent, programming & events and Paramount+ chief content officer, music, said in a statement. “She has shifted the music industry and cemented her status as a global superstar with her crossover appeal, genre-defying style and continuing to be unapologetically ‘Nicki’.”